Aconitum (Monkshood)
The wolves came down from the mountains that year and we dipped our arrows in poison brewed from monkshood root and went hunting in the forest. We’d hang a bleeding sheep from a tree and conceal ourselves upwind. We killed by starlight. As soon as the creature was wounded, we’d follow its trail through the snow. Monk taught me to recognize that a trail is not only on the ground but also among the bracken and even the trees. In the cold night his face looked blue. He kissed me among the firs. He wore a wolfskin coat. His poison lasts and lasts.

Alkanet (Italian Bugloss)
The beautiful duchessa has lost her shoes in the marsh. She will die of malaria, “bad air.” She will lie on her stomach while the physician places hot glass cups on her naked back to draw the bad air out again. The glass will glow and the beautiful duchessa will whimper softly. The sound will remain with the physician until his death. He doesn’t know it yet, he’s still free, happy, at his desk, writing his never–to–be–finished treatise on waterfowl. “Silver back,” he writes.

Anemone (Windflower)
Brocade spotted with rain. A yellow heart. Denied land for a convent, St. Brigid begged for a portion of earth the size of her cloak. The king agreed with a laugh, and St. Brigid’s friends took the edges of the cloak and walked in four directions, mile after mile. Cover me with thy cloak of blue. It is said that anemones spread as far and as easily as St. Brigid’s mantle. Rain–colored hills, while her skull rests in Portugal. At the convent, blueberry preserves. Brigid, also known as Bride, presides over cattle, abortions, and spring.

Browallia (Amethyst Flower)
Linnaeus named it after his friend John Browall. Browall, in turn, advised Linnaeus to study abroad. While Linnaeus was away, Browall began courting the botanist’s fiancée, the amethyst–eyed Sara Lisa Moraea. “Very tired and Browall was here again,” Sara wrote. She snuffed out the candle, snuggled into bed, and blew her nose on the sheet. Rituals comfort—perhaps especially the disgusting ones. Browall (very ugly) declared again today he would kiss her feet. “Oh God your little black boot.”

Brunnera (Siberian Bugloss)
Little clustering blooms, like lace, like suds. The attraction of projects that make themselves. It’s only necessary to do a little bit every day. The girl who taught me to keep a diary loved the moment when she would transfer everything to an enormous binder and write the year on the spine. 1988. 1989. How the old farmhouse creaked! It was cold, laundry piled up on the piano bench, dead deer gazed down from the walls. One of the happiest places I’ve ever been. In the morning the long gray fields and a car advancing, so slow, like a child with a lantern. 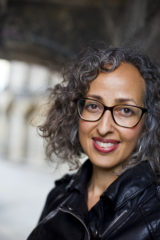