Ludo and the Goblin King

When Labyrinth came out in 1986, I was 11 years old. (I hit menarche that year and was part of the first sixth grade class in my home town to move from the elementary school to what was still called junior high. Good times.) I had no idea who David Bowie was. Honestly, to this day, even though I have a much broader, deeper, and more nuanced appreciation of Mr. Bowie, who was performing genderqueer and genderfluid decades before anyone came up with those words, part of me still thinks, and will always think, of him as “Oh yeah, that guy who played Jareth the Goblin King.”

There isn’t actually a downside there.

I think I first saw Labyrinth on VHS, rented from a video store, when video stores were still new and awesome instead of almost extinct. I rented it because I loved the Muppets, had seen The Muppet Movie (1979), The Great Muppet Caper (1981), Emmett Otter’s Jugband Christmas (1977), and every episode of The Muppet Show (1976–1981) I could find. I knew who Jim Henson was, and what he and his team were capable of doing. And much of my love for Labyrinth is based on exactly that: the amazing things the movie does with puppets.

We’ll get back to that in a minute, because I actually want to start by taking about Jareth the Goblin King.

On the simplest level, Labyrinth is about Sarah’s quest to rescue her baby brother Toby from the Goblin King. Moving back a step, it’s about Sarah accepting responsibility for herself and her actions, and taking the first step away from utter self–absorption to awareness of and love for those who love her. That’s a story about the change from childhood to adulthood at its most schematic level; that same schematic applies to all kinds of children’s literature (just for one example, Frances Hodgson Burnett’s The Secret Garden). But Labyrinth is also talking about the shift from childhood to adulthood on another level, the very uncomfortable level of sexuality.

Jareth the Goblin King is both highly sexual (those pants leave nothing to the imagination) and highly queer (oh the eighties, oh the blue eyeshadow). And his obsession with Sarah shifts steadily over the course of the movie from basic (campy, over the top) fairy–tale villainy toward romantic/erotic love. What exactly he wants from her is never clear; the movie is much more interested in her refusal than the details of what it is she’s refusing. But just as Bowie is the lone adult in a world of puppets and children, Jareth is the lone sexually–aware creature in a world of sexless monsters. He transforms (or Sarah’s awareness of him transforms) from an adult blocking figure like the Wicked Stepmother (whose wickedness is shown by her absolutely dreadful crime: making Sarah babysit Toby), there only to antagonize her, to something far more dangerous. Her quest is Jareth’s (admittedly perverse) way of courting her. The closer she gets, the more his antagonism shifts to seduction (“Everything I’ve done, I’ve done for you”). He is both frightening and intensely attractive (meaning not what we usually do by that word, i.e., pretty, although Jareth is also that, but in the sense of attracting, as a magnet attracts needles or a black hole attracts everything within its reach), which—I shamelessly posit—is a pretty good representation of how teenage girls feel about their sexuality and about the mysterious—positively labyrinthine—world they are teetering on the edge of.

This is pretty risky for a children’s movie, even though Sarah refuses Jareth in the end. What I particularly like about it—aside from the fact that, as a child of the eighties, I do in all actuality find Jareth insanely hot—is the way that, while he goes from antagonist to seducer, from a cartoon villain to a complex character, morally as well as sexually ambiguous, he never ceases to be dangerous. This is not a retelling of Beauty and the Beast. Sarah does not reform Jareth, and she’s not going to. Just as Sarah refuses Jareth, Labyrinth refuses the incredibly dangerous myth that the “love of a good woman” can change a brute (beast) into a prince. The path he offers her into adulthood is the wrong path, and Sarah’s ultimate triumph in the movie is that she chooses Toby over Jareth, chooses to be her little brother’s big sister over the opportunity to be Jareth’s queen.

Labyrinth is also telling its audience that it’s okay for teenage girls not to be ready for the inescapably sexualized adult world waiting for them. It’s okay for them not to want to be beautiful. It’s okay for them to say no when their boyfriends pressure them for sex. This was a vanishingly rare idea to be offered to teenage girls in the eighties—compare, for instance, The Breakfast Club, which is all about iconoclasm and defiance of authority and accepting other people as they are, even if they’re different from us, right up to the end, when it absolutely screws the pooch and tells us that Claire’s performance of femininity is “right” and Allison’s is “wrong.” I did not see The Breakfast Club when it came out in 1985, and I am grateful, because I was and am every inch an Allison and the last thing I needed as a teenager was to be told, yet again, that I was supposed to be Claire.

I needed stories like Labyrinth that say it’s okay not to want the sexualized, exaggeratedly feminine version of adulthood represented by that ridiculous white dress. Sarah can grow up, from selfish child to responsible adult, without having to say yes to Jareth. A boyfriend is not a victory condition. You don’t have to turn your back on your friends (Sarah in fact makes friends as she solves the labyrinth). And (for the audience) you can still take delight in imagination and storytelling and magic.

I love the puppetry in Labyrinth, the ingenuity, the flexibility, the way that—unlike the denizens of Sesame Street and The Muppet Show—the inhabitants of the Labyrinth can be mean, selfish, unhelpful, and downright malevolent. I love Brian Froud’s visual aesthetic that makes the puppets look as “real” as the human beings, and the way that it means anything, anything, can be sentient and opinionated. And more than pretty much anything ever, I love Ludo.

Ludo, who is huge and soft and sort of like an orangutan crossed with Ferdinand the Bull, is the necessary proof that the world of the imagination is not innately bad. (It would be horrible for a Henson–Lucas–Froud–Bowie movie to tell its audience that imagination is solely hurtful and dangerous.) Ludo’s friendship is unconditional; he is both protective older sibling and hero–worshipping younger sibling, and he absolutely hits all the buttons of anyone who was a lonely, bullied child. Adulthood doesn’t mean that your imagination will turn against you, just as it doesn’t mean that your identity will be reduced to your sex.

Labyrinth is about the transition from childhood to adulthood by way of adolescence allegorized as Sarah’s journey through the labyrinth: full of traps and wrong turns, involving the perilous negotiation of sexuality and the long hard lesson of taking responsibility for your own actions, but also exhilarating, liberating, responsive to, and in full engagement with your imagination. And with the promise—the promise that I think every child looking at the adult world needs—that you will still be loved at the end.

One Response to “Ludo and the Goblin King” 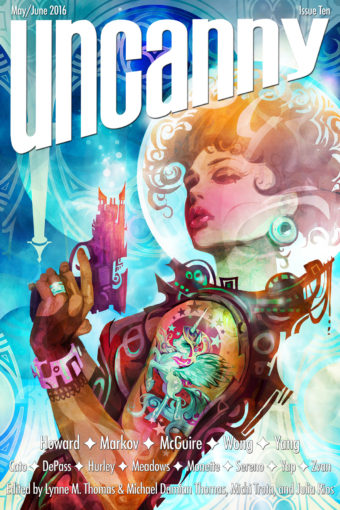