by Amal El–Mohtar in Uncanny Magazine Issue One | 286 Words

The old ways were lost on a dusty road between
Orion and Abora, sewn with the splintered skins of stars,
tracked in spirals, where once a small boy
fit Jupiter in his eye. It became a habit with him, the vast—an ocean fell
out of his mouth, and in it he rolled
the planets up with small green snakes,
made cormorants of his mistakes,
until his blood ran cold.

Three centaurs wearing bowls of glass
in a vision once I saw
they were a mesh of light and shade
and through the vastness whole they neighed
singing of bright Carina.

The new ways were found tucked inside a nautilus shell,
spat up from the swell—a missive white and tiger–striped,
a particle from waves. Cradled against the ear it spoke
old names in careful sequence, hummed
a path to walk in spirals, drummed
the silence ‘til it broke—and hatched
uncanny creatures mixed and matched
to thunder through the air, ablaze,
to toss their fractal hair, to raise
a thousand voices in a song
of praise, of wonder, loud and long—

the new ways will cost
they sang as they flew
but they flew so high. 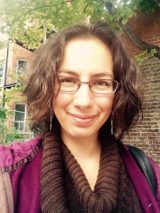 5 Responses to “The New Ways”