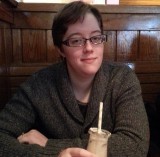 Brit Mandelo is a nonbinary, masculine-identified writer, critic, and editor whose primary fields of interest are speculative fiction and queer literature, especially when the two coincide. They have two books out, Beyond Binary: Genderqueer and Sexually Fluid Speculative Fiction and We Wuz Pushed: On Joanna Russ and Radical Truth-telling, and in the past have edited for publications like Strange Horizons Magazine. Other work has been featured in magazines such as Stone Telling, Clarkesworld, Apex, and Ideomancer. They also write regularly for Tor.com and have several long-running column series there.