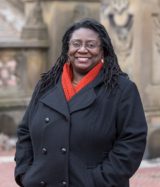 Jennifer Marie Brissett is a British–Jamaican American who immigrated to the US when she was four and grew up in Cambridge, MA. For three and a half years, she owned and operated the Brooklyn indie bookstore Indigo Café & Books. She has a Master’s from the Stonecoast MFA Program in Creative Writing and a Bachelor’s in Interdisciplinary Engineering (Electrical Engineering with a concentration in Visual Art) from Boston University. Her short stories can be found in The Future Fire, Halfway Down the Stairs, Lightspeed, Morpheus Tales, Terraform, Warrior Wisewoman 2, and APB: Artists against Police Brutality. Her story “Secrets of the Sea” was short listed for the 2013 storySouth Million Writers Award. Her debut novel Elysium (Aqueduct Press) was a finalist for the Locus Award for Best First Novel, placed on the Honor List for the James Tiptree Jr. Award, and won the 2015 Philip K. Dick Special Citation Award. She currently lives in NYC.