Outstanding news, Space Unicorns! “And Yet” by A. T. Greenblatt is a 2018 finalist for a Best Short Story Nebula Award!

It is an amazing list of finalists. CONGRATULATIONS TO EVERYBODY!!!

From the SFWA Nebula Award announcement:

The Nebula Awards will be presented during the annual SFWA Nebula Conference, which will run from May 16th-19th and feature programming developed and geared toward SFF professionals. On May 18th, a mass autograph session will take place at the Warner Center Marriott Woodland Hills and will be free and open to the public.

The Nebula Awards, presented annually, recognize the best works of science fiction and fantasy published in the previous year. They are selected by members of the Science Fiction and Fantasy Writers of America. The first Nebula Awards were presented in 1966. 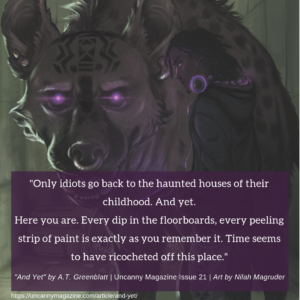