With continuity–resetting crossovers in the Marvel comics universe and a post–event time jump in the DC universe (coinciding with a new wave of titles and creative teams) this summer, I’ve been thinking again about the relationship between the comics continuities and the cinematic counterparts, and especially the films’ roles as the most well–known incarnations of their respective universes, earning billions of dollars worldwide, solidifying 21st Century incarnations of the characters in the minds of viewers world–wide. These cinematic portrayals stand large in the global cultural imagination, due to the incredible reach and financial success of the films and the size and scope of the franchises.

Therefore, I think it’s useful to take a moment to compare and contrast what each company is doing with their comics, the source of the cinematic material, and those far–more–widely–consumed cinematic incarnations. The huge transmedia merchandising juggernauts that accompany these universes have an over–indexed cultural significance important to consider.

Who Gets To Be a Hero?
This year, both Marvel and DC are re–setting their comics status quo, Marvel with a continuity reset/rebook in Secret Wars/Battleworld, DC with Convergence and several new series (most notably those in their DC YOU campaign). And in each case, the post–even status quo appears to be one with a greater breadth of diversity in terms of who gets to be a hero—more heroes of color, more women as heroes, more QUILTBAG heroes, and so on. On top of that, both companies are bringing in more marginalized voices as creators, hiring more women, more people of color, people from religious minorities, and QUILTBAG people, including intersectionally hiring people speaking from multiple marginalized positions.

The weight of comics history allows for a wide range of interpretations and a wider (and more diverse) cast. Captain America has been around since 1941, and over time, numerous other characters have carried the shield, the legacy, and/or the name. The mantle of Superman has been carried by a black man, a boy, a cyborg, and others. The power of Thor has been wielded by a woman, a horse–like man, and so on. And if we include alternate universe versions, most of these heroes have been gender–swapped and seen incarnations from different races, creeds, and more.

When that deep back catalog of different incarnations is taken alongside current pronounced efforts to increase diversity of content and creator, the Marvel and DC universes present a wide range of stories for audiences to engage with, see themselves in, and to be inspired by. Both companies, with notable missteps, seem to be coming around to the idea that showing a wider range of heroes appeals to a wider audience, and is therefore good business.

By contrast, the cinematic versions release more slowly and their choice in heroes obscures the work both companies are doing in terms of diversifying their universes in their comics.

So far, both Cinematic Universes are overwhelmingly white and male. This is unsurprising given Hollywood’s casting habits. However, there are notable exceptions, from the casting of mixed–raced Hawaiian, Native American, French, and German Jason Momoa as the usually–white Aquaman to the casting of Samuel L. Jackson as Nick Fury, the inclusion of Cobie Smulders as Maria Hill, and some other supporting characters in the MCU, lending some range to these film universes and showing how re–interpreting a character can broaden the range of who gets to be a hero without drastically changing the core facets of those heroes.

The choice to not prioritize that same widening approach in their cinematic universes being used in the comics means that where the film universes should be more modern, more forward–looking than the comics universes, being entirely 21st–century incarnations of the characters, re–invented for these new incarnations, instead both companies’ cinematic universes are falling behind, and are now struggling to catch up by green–lighting films for Wonder Woman, Captain Marvel, Black Panther, and so on. The tide does seem to be turning.

But that doesn’t change the fact that Marvel’s first Avengers team line–up contained exactly one woman and no people of color (though Nick Fury and Maria Hill provide some more diversity in the overall cast), the Guardians of the Galaxy team had one woman and no people visibly of color (though the film included three actors of color as Guardians, all played aliens outside the human range of racial presentation).

Perhaps due to the fact that DC’s cinematic universe is still in its early stages, its Justice League may quickly prove to be more diverse than the first MCU Avengers line–up and perhaps more diverse than the most recent iconic comics–universe Justice League. Working from already–cast characters, the cinematic Justice League is on–track to include one woman and two men of color. However, the certainty of this result is far less solid, as several members remain yet to be cast. The inclusion of Cyborg alongside Aquaman would put a black man on the team, and one of the best–known Green Lanterns, John Stewart, is also a black man. Aquaman, Cyborg, and a black Green Lantern could bring the team to 50 percent people of color, but perhaps no women of color. There are several arrangements of the Justice League which could present a very diverse initial team, should the DC executives choose to do so. The iconic 2011–2015 incarnation of the team, for context, includes one woman (Wonder Woman) and one man of color (Cyborg).

And looking at another axis of representation, that of QUILTBAG persons—the both Marvel and DC’s cinematic universes provide negligible textual evidence to indicate that any of these heroes are anything but cisgender and heterosexual, only heterosexual pairings are acknowledged in the narrative or shown on–screen, and in the most recent comics line–ups of the team, only Wonder Woman is depicted as QUILTBAG.

So What?
When we talk about these cinematic universes, what we’re also talking about is the leading tip of worldwide merchandising juggernauts. The financial powerhouse of the MCU is now informing the comics continuity in major ways, from the inclusion of Phil Coulson in the comics, the growing primacy of the Inhumans, and so on. The MCU versions of characters are getting a larger and larger share of Marvel’s transmedia content blitz: video games, party supplies, clothing lines, action figures, and a million other ancillary materials.

For at least one new generation of fans, these films will be the iconic versions of the comics heroes. Nick Fury will always be the Samuel L. Jackson version of the character, Superman will be synonymous with Henry Cavill the way he was with Christopher Reeve. Batman will be Christian Bale (and perhaps, eventually, Ben Affleck), Black Widow will be part–and–parcel with Scarlett Johannson. And those versions of the characters and stories set the tone for all of the ancillary material, they are the flagship variants that all of the books and merchandise and other ancillary materials and narratives refers back to.

I’m a huge comics fan. I believe in the power of superheroes to instruct and inspire.  I grew up with superheroes as some of my finest role models. Spider–Man taught me responsibility, the X–Men taught me acceptance, Superman helped instill in me a sense of justice and looking out for those weaker than me. And that’s why I’m incredibly conscious of the messages these best–known incarnations of the DC and Marvel superhero universes are saying about who gets to be a hero. Because those are the messages that will echo with the might of billions of dollars of merchandising around the world, the messages that children and adults will ingest and replicate in the way they tell stories about themselves and others. If the films roll out a consistently less–diverse set of heroes than the comics, those choices will have a huge ripple effect, one likely to work directly against the efforts the companies are making in their comics universes.

In an age where demand for diversity of content and creators is rising and being actively discussed in the world of comics, prose SF/F, and beyond, unchallenged assumptions and the replication of teams, worlds, and heroic paradigms from earlier, less diverse and inclusive eras of superhero comics history are wasted opportunities. These cinematic universes could future–proof themselves by becoming more explicitly inclusive and to cast the widest possible net of marketing.

Both Marvel and DC have incredible potential to lay strong foundations for decades of sales and derivative properties and franchises with their current cinematic universes, but are, so far, falling short of their potential in terms of representation, especially compared to their own comics universes. DC’s cinematic universe is comparatively new, and DC may therefore be in a position to pivot quickly and outpace Marvel in terms of representation, presenting a more diverse first incarnation of their flagship team. Meanwhile, Marvel is already showing strong signs of diversifying the universe by greenlighting Captain Marvel and Black Panther films, and the seeming promotion of heroes such as Falcon, Scarlet Witch, and War Machine at the end of Avengers: Age of Ultron, though Black Widow remains marginalized on her own team, especially when looking at merchandising. But as these casting choices are made, it’s worth noting what choices aren’t made, what identities and perspectives remain un–represented on the cinematic rosters. Will the DC Cinematic Universe’s Wonder Woman be explicitly bisexual/pansexual as she has been shown to be in the comics? Will any other heroes in Marvel or DC identify as QUILTBAG? That remains to be seen.

Both universes are still very much in motion, even though their plans stretch out years in the future. And just like in the comics, it’s never too late to start over and try again, or to try to do better once you’ve started. 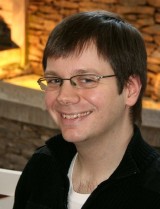 Michael R. Underwood has circumnavigated the globe, danced the tango with legends, and knows why Tybalt cancels out Capo Ferro. He also rolls a mean d20.

He is the author several series, including the comedic fantasy Ree Reyes series (Geekomancy, Celebromancy, Attack of the Geek) and Genrenauts, a science fiction series in novellas. By day, he’s the North American Sales & Marketing Manager for Angry Robot Books.

Mike lives in Baltimore with his fiance and their ever–growing library. In his rapidly–vanishing free time, he studies historical martial arts and makes pizzas from scratch. He is a co–host on the Hugo–nominated Skiffy and Fanty Show.