The day you arrive at the academy, you spend just three minutes outside the car before begging your mom to drive you back home. There are too many girls. They’re too loud. They’re laughing. Some of them are flying. Even if you weren’t a mindreader, you’d be overwhelmed.

Your mother, who took a day off work and has driven eleven hours straight to get you here, refuses. She is the worst mother ever.

A girl approaches, her eyes so sharp you expect her codename to be DAZZLE or CHARISMA or SINGULARITY. You can’t stop yourself from reading her mind: she calls herself Meg.

You’re grateful she’s not a mindreader, too.

Meg shrugs and tells you she can blow things up with a thought. She offers to show you to your dorm. Bewildered, you hug your mother goodbye, grab your duffel, and follow Meg, whose hair is brown and whose eyes are lighter brown and whose codename should be TEMPEST or HURRICANE or AVALANCHE based on how she’s making you feel.

For the next three weeks, the days are a blur of headaches and other girls’ anxieties.

I’m not strong enough to stop a train.

I’m too slow to defuse the bomb.

My witty rejoinders are not actually witty.

That creepy mindreader is probably reading my mind.

But there’s also girls kissing each other. So much kissing. Eavesdropping makes you feel more connected and more alone, both at once, like a tsunami that excitedly tumbles you to shore, while at the same time trying to drown you and smash your head on the rocks. You wish you could block out all their make-out sessions. And yet… if you could, you don’t know if you would.

You learn to get by, as you always have. You study in the stacks, which are almost always empty. You eat lunch in your dorm room when your roommate is making out with someone in the stacks. You do not attend parties or join clubs, and you do not participate in the Save-the-City simulations… not that anyone asked you to join their team. Don’t they realize you could read the other team members’ minds as well?

One day you’re walking to class along the path that maximizes your chances to see Meg walking to her class, and you run into her. She’s crying. You’ve been acing Controlling Your Powers class and do not immediately read her mind. Which is frustrating, because it forces you to actually ask her what’s wrong, and speaking to other humans as if you’re not a freak is a skill you’ve yet to master.

Meg doesn’t notice how you mumble, how the words come out in the wrong order, how you keep glancing at the trees and the sky and the ground instead of looking in her light-brown eyes. Or if she notices, it doesn’t seem to matter.

She tells you that her three older brothers have just signed on as henchpeople for a supervillain. Meg is afraid that deep down, she’s evil, too. Why else is her power about blowing things up?

You attempt to comfort her and could not be more awkward if awkward was your superpower. But for a second, her sharp eyes soften and she takes your hand. She asks you to read her mind. To tell her if she’s evil. She’s going to let down her barriers, just this once.

You pull away and shake your head. You don’t care if she’s evil. Most days you think you are, too. But if you go into her mind, you’ll see everything: what she really thinks about you, or if she thinks about you at all. You’ve been down this road so many times, and it always ends in a great fiery crash and your heart bleeding out on the pavement.

Meg says please again and suddenly your A+ in Resisting Torture is absolutely meaningless. You crumble.

Her mind is chaotic and messy, and you sift through it carefully, trying to respect her privacy while at the same time rooting through her most secret thoughts and feelings. You find her asshole brothers and her disinterested parents and, surprisingly, many images of yourself.

You sitting in the stacks studying, a pen dangling from your mouth.

You standing near the bleachers, pretending not to watch Save-the-City while obviously actually watching it.

And you on that first day of school, standing by your mother’s car and wearing a scowl, as if anger could somehow protect you. But there’s sun dappling your hair and cheeks and nose and the way you’re wringing your hands betrays exactly how nervous and excited you are to be there.

When you’re done reading Meg’s mind, you tell her she’s not evil. At least, not any more evil than you are, or your classmates, or your headmistress. You tell her that evil isn’t a noun, it’s a verb. She won’t end up a villain like her brothers unless she wants to.

When Meg kisses you, you kiss her back. Her lips taste like her memory of summers at the ocean, sundrenched and salty, and kissing her in person is so much better than when you were just reading about kissing in other girls’ minds. You think that if Meg decides to become a supervillain, you will be her most loyal henchwoman.

You are once again grateful that Meg is not a mindreader.

And that she knows what to do with her tongue.

A few months later, when you and Meg are holding hands in the stacks, when you’re late for Extreme Physics and she’s late for Hostage Negotiations and neither of you cares, not even a little, you’ll call her BLAZE and VOLCANO and SUPERNOVA, because it makes her blush when you imply that she’s hot.

Your mom was right not to drive you home, back on that first day. She is not, in retrospect, the worst mother ever. The academy still overwhelms you, but you want to stay. Not just for Meg, but because you like who you’re starting to be here. Because last week you got invited to play Save-the-City. And because if evil is a verb, so is hero.

(Editors’ Note: Jenn Reese is interviewed by Caroline M. Yoachim in this issue.) 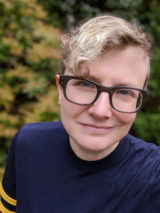 Jenn Reese (she/her) writes speculative fiction for readers of all ages. Her middle grade books include A Game of Fox & Squirrels (Henry Holt) and the trilogy beginning with Above World (Candlewick), a finalist for the 2012 Andre Norton Award. Jenn’s short fiction has appeared in Uncanny, The Magazine of Fantasy & Science Fiction, and Analog, among others. Jenn has a deep, abiding love of road trips; they are the liminal space between what was and what might be, but with snacks. More at jennreese.com.