Athena Holds Up a Mirror to Strength

Girl, you best stop setting yourself on fire,

you may be the phoenix,

but these bones aren’t kindling

to keep others warm—

your spine isn’t a bridge

you need to burn,

and you aren’t a consequence,

remember who you are.

Woman, you a hundred rivers,

each one gathering itself

of its own current

and nothing beyond that—

this is your magic,

but hands full of knives,

remind them who you are.

Goddess, you are both roots

and sky, a gentle hymn

of wolves, keen and hungry,

but a universe of free. Your chest

and this holy crusade

has made you a heretic,

but your blood sings for it,

this legion of flaws, mouth reddened

by your own sins—

tell them who you’ve been.

(Editors’ Note: “Athena Holds Up a Mirror to Strength” is read by Erika Ensign on the Uncanny Magazine Podcast, Episode 34A.) 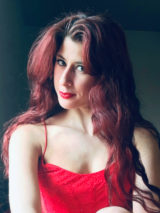