When I was growing up in Miami, my late mother, Patricia Stephens Due, sat down with me on Saturdays to watch “Creature Features”—old Universal film classics like Dracula, The Mummy, and The Mole People. The first deep scare I remember is the end of the 1958 version of The Fly, when the scientist/fly caught in a spiderweb calls out in his hopelessly tiny voice, “Help me! Help me!” The depths of his inconsequence scared me for life. Mom also gave me my first Stephen King novel, The Shining, on my 16th birthday.

And so my love for horror was born.

I didn’t know then that I wasn’t alone: black children across the country were also watching movies like Night of the Living Dead, Candyman, and Tales from the Hood with their parents and grandparents, drawn to horror both to heal trauma and to celebrate representation. Black horror fans’ love of horror is the stuff of legend: theaters in black neighborhoods carry the (well-earned, at times) expectation that audiences will express vocal frustration, outrage and joy while they watch their favorite horror films. For years, black comedians have joked about how black characters in horror would never rush so foolishly toward danger.

It’s no surprise, then, that Black Horror is now rising to the national consciousness. A large part of it, of course, is the phenomenal success of Jordan Peele’s films Get Out (for which he won the Oscar for Best Original Screenplay) and his follow-up film Us. I executive produced a documentary for Shudder called Horror Noire: A History of Horror, the streaming channel’s first original documentary. (The Hollywood premiere trended on Twitter as a who’s who in Horror Hollywood, and it was the highest rated film on Shudder the weekend after its debut this past February.)

Our documentary, directed by Xavier Burgin and adapted from the 2011 book Horror Noire: Blacks in American Horror Films from the 1890s-Present by Dr. Robin R. Means Coleman, has been embraced by horror fans of all backgrounds for its lessons on the most common tropes around black characters in cinematic horror:

The documentary also discusses the ways black creators have fought back with films like Blacula, Ganja and Hess, Eve’s Bayou, Tales from the Hood, and Get Out. It traces iconic characters in horror like Ben (Duane Jones) in George A. Romero’s Night of the Living Dead and contextualizes films like Get Out within a framework of both horror history and U.S. history.

And history is in the making. A strong early box-office showing for Jordan Peele’s Us is cementing him as not only a leading black director, but a leading American director—and horror director. It is a badge he wears with pride. Because Peele, like me, and like so many other writers I know, loves horror. His profile photo on Twitter is from a Key & Peele sketch evoking The Shining.

For many black horror fans, I think the love of horror—whether or not the characters are black—is rooted in the desire to process and escape trauma. I didn’t realize it as a child, but I now believe my mother’s love of horror was directly related to her activism during the Civil Rights Movement in Florida, when she and other Florida A&M University students—including my aunt, Priscilla Kruize—spent 49 days in jail in Tallahassee after their arrest during a lunch counter sit-in. In 1960, a police officer threw a teargas canister directly in my mother’s face as she led a nonviolent march. Until she died, my mother wore dark glasses even indoors because of sensitivity to light after her experience with state violence.

I also think horror appeals to fans in general as a salve for traumatic histories, events, and experiences, allowing us to confront real-life demons from a safe distance. When Jordan Peele tweeted on March 17 the simple words “Us is a horror movie,” the horror community saw it as a rallying cry, defending horror from the genre bias that often limits students, writers, and filmmakers because power brokers often consider horror to be nothing more than cheap scares. It isn’t a “thriller,” as studios are so apt to call quality films, but horror. On my Twitter page, fans with disabilities and mental illness shared how meaningful the genre has been to them.

As fans defended the honor of horror in general, I saw echoes of what I believe is also the power of Black Horror—to visualize trauma. To fight back. To try to heal. To seek out survival behaviors in crisis. To face the worst and be able to walk away unscathed… because, unlike the demons in our real lives, it isn’t real. By comparison, in fact, sometimes the real-life demons don’t seem quite as bad. Or sometimes, horror is the only way to help others understand.

Jordan Peele’s Get Out is the epitome of the contemporary racialized horror story—where racism is literally the monster, and all members of the audience, no matter their race, are forced to empathize with a black protagonist who is hunted and abducted by a white family. Within that simple premise, Peele layers in commentary on white liberalism, micro-aggressions, the history of slavery, and the appropriation of black bodies.

Another good example is Toni Morrison’s Beloved (which, granted, the author herself does not consider horror). In her use of a ghost to embody the child murdered by her mother, Sethe, to prevent the infant from falling into slavery, Morrison created a metaphor so powerful that Jonathan Demme’s film adaptation is almost too painful to watch despite its cinematic beauty and earnest casting of Oprah Winfrey, Danny Glover, and the introduction of Thandie Newton. Beloved helps us feel at least a sliver of what it would have felt like to live with that guilt and trauma, which is so hard to put into everyday words. Horror’s visceral nature makes it the perfect genre for such a story.

In the age of Jordan Peele’s Get Out, it’s easier to see how well horror can help us allegorize racial monsters to help us confront true-life fears, especially as a marginalized group where we are often in a minority: the only one in the room at work, at school, at Starbucks. When the blue lights of a police cruiser surprise us on a deserted road.

But as Us shows us, not all black horror is about race—blackness adds a layer to messaging, but those characters could have been white. The simple appearance of black characters in horror is still noteworthy, evoking societal advancement at times, or societal pathologies at other times, depending on the filmmaker. The first awareness I had of a black character in horror was probably Ken Foree as the heroic lead in Dawn of the Dead, who survived the film. Or was it Scatman Crothers in The Shining, who was axed in the chest by Jack Nicholson as soon as he walked through the door of the Overlook Hotel? (A departure, by the way, from his fate in Stephen King’s novel. In the film, he was simply thrown away.)

But I loved the horror movies of my youth, flaws and all. And in the ’90s, I saw Def by Temptation, Candyman, Tales from the Hood, and Eve’s Bayou, and by then I knew I wanted to write horror. My first novel, The Between, was published in 1995.

But even more than the films, it was books and writers who convinced me to pursue my dream of writing horror. The first was the late Gloria Naylor, whose novel Mama Day showed me that a novel with metaphysical leanings could be celebrated as literature. Second was Anne Rice, who I interviewed by phone as a reporter for The Miami Herald and asked her the question I was wrestling with privately: “How do you answer criticisms that you’re ‘wasting your talents’ writing about vampires?” Not my words—I was quoting from actual critics—and then I waited with bated breath.

Rice wasn’t offended or bothered. She just broke it down: “My books are taught in colleges,” she said. She went on to explain all of the sweeping themes one can write about in horror—love, death, and mortality. I finished a draft of The Between nine months later.

It isn’t always easy being a black horror creator, or a black horror fan. Just as some black movie fans on social media have said Us looks too scary to watch, book clubs have been afraid of my book covers, and believers have feared for their souls. I’ve faced blank faces pitching black horror projects in Hollywood, where a producer once asked aloud what so many other executives were thinking: “Do the characters have to be black?”

While I was writing The Between in the early 1990s, before I had even read a single Octavia E. Butler novel, I remember asking my sister if she thought anyone would read black horror stories. But sure enough, Terry McMillan had ignited the black commercial books boom of the 1990s, so I published The Between quickly, following up with My Soul to Keep, Joplin’s Ghost, The Good House, and my short story collection Ghost Summer, among others. In publishing, it was like I had two families who were rarely in the same space—black readers and horror readers.

Today, the lines are blurring a bit more. More horror readers are aware of black writers, and more black readers are embracing horror.

But as much as black horror is gaining popularity on screen, movies still haven’t caught up to the variety of black horror works available in literature. From the late, great L.A. Banks’s Vampire Huntress series to Brandon Massey to literary star Victor LaValle, black horror writers have been on the rise as well. The next step is to move from original scripts like Peele’s to film adaptations of black horror literature—which is on the horizon. LaValle’s The Ballad of Black Tom is in development at AMC, for example. Several of my works also have been in and out of option for years, but the timing may finally be right for a greenlight.

So far, my only film adaptation is the short zombie film I crowdfunded and shot myself: Danger Word, co-written with Steven Barnes, directed by Luchina Fisher. (You can see it free here at dangerword.com.) It stars veteran actor Frankie R. Faison and newcomer Saoirse Scott. During our crowdfunding campaign back in 2013, we railed against stereotypes and tropes, promising a new era in black horror.

That era is here. 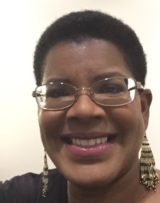 Tananarive Due is an author, educator, and producer who teaches at UCLA and in the creative writing MFA program at Antioch University Los Angeles. Her website is at tananarivedue.com