Childhood Memory from the Old Victorian House on Warner

then the butterfly was gone
swallowed
stolen
merged
with the wall

that maybe
through smoke and hellfire
that butterfly
finally did

(Editors’ Note: “Childhood Memory from the Old Victorian House on Warner” is read by Erika Ensign on the Uncanny Magazine Podcast, Episode 27A.) 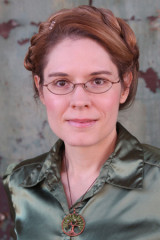 Nebula-nominated Beth Cato is the author of the Clockwork Dagger duology and the Blood of Earth Trilogy from Harper Voyager. Beth is a Hanford, California native transplanted to the Arizona desert, where she lives with her husband, son, and requisite cats. Follow her at BethCato.com and on Twitter at @BethCato.