Courage to the Sticking Place: Connecting SF/F Students With Creators

I hear them outside my office before I see them: footsteps, then voices, two at minimum, but sometimes more. I lean in closer to my desk, listening to their feet shuffle.

They always travel in packs.

When they start talking three feet short of the threshold, it goes something like this:

“Are you sure? I don’t hear anything.”

“What’s that even mean?”

“She leaves the door open all the time. We’ll come back later.”

“So write her an email.”

And so they peek through the door, looking sheepish. It will be a student wanting to talk to me about a paper draft, or ask if I’ll chaperone an event, or check with me about missing work. Their emotional support companion will always insist they’re just going to hang out in the hall, it’s cool, no problem, until I remind them I have chocolate and tea and two guest chairs, so they may as well come in, too. The food is tempting enough for the third friend to stay, if there is one, staking out a spot on the floor. Sitting there is a small price to pay for hospitality when you’re tired and afraid. They look bemused as I pass them Wonder Woman and Darth Vader mugs.

If I haven’t smiled already, I do now.

In the consuite of the 2016 Nebula Awards conference in Chicago, I’m trying to figure out how to tell Fran Wilde I loved Updraft. It’s the first of many encounters at many conferences, many conventions where I’ll struggle with excitement over meeting authors I admire, trying to square them with my fears of not belonging. I’m more than a year away from the novel I’ve just sold actually coming out. I don’t have a single professionally qualifying story sale to my name yet. But I move around the con, gathering people up like a social katamari, collecting humans as I roll past, because if I slow down to think about who I’m talking to, I’ll fall apart. I tuck myself into pockets of people, lingering after panels to chat with folks who asked interesting questions, getting sodas at the bar with people who are good enough not to care that I don’t drink.

I introduce myself as having the best job in the world. I teach science fiction and fantasy literature, and creative writing, and nearly anything else I want to lay hands on at a public boarding school for gifted STEM students. More than a few people make envious noises.

When I’m out at a con or a reading event, teaching is my calling card, a way of opening the doors I want my students to walk through. I spend a lot of time thinking about the nervous students outside my office coming with their own security detail. I envy them that protection. But I plow on, anyway.

I have people to meet.

I have students to be brave for.

There are a lot of teacher certification programs out there. A lot of courses of study and continuing education geared toward teaching people how to be educators. Some of them might even work. I wouldn’t know. I’ve never enrolled in one.

Everything I know about teaching is an extrapolation of handing someone a napkin at a cocktail reception or discovering a forgotten purse at a bar, the encounters turning into nights of conversation. My teaching is spotting moments of opportunity and jumping into them. It’s working on the fly, changing plans, making new goals when old ones fail. It’s sometimes not knowing what the goal needs to be until I walk into the classroom and read the expressions on my students’ faces.

We tend to forget how much courage learning requires. To be constantly judged and measured and given feedback and expected to act on it. We forget, too, that being a student means carrying the constant fear of not being taken seriously. When they are forever scrutinized, the terror that someone will laugh at your ideas sits in a student’s stomach like a stone. How could it be otherwise?

It’s true that I grade papers and teach stories, but these are a very small part of my real job.

I am in the business of teaching young people to be brave.

I’ve shown my students my rejections, both from agents and editors, and I’ve shown them excerpts from edit letters and critique partner feedback. I’ve taken students to author speaking engagements and nudged us to the front of a scrum to say hello, or stopped a discussion in class to tweet a student’s thought or question at the author we’ve been reading. It doesn’t always work out, but I have to show them what it looks like to try. I have to answer their courage with at least a little of my own.

I’m an introvert by nature. Like many introverts with a knack for performance, I play garrulous and charming well. I’m good for about six, maybe seven hours of it before I lapse into a kind of social vegetative state, staring at walls and hearing only parts of sentences I can’t summon the energy to answer. But it’s a convenient battery life. Sufficient. It covers the hours I’m likely to spend in classrooms or at meetings, and tends to be enough to push me through a day of panels and readings at a con. Deep down, I still have a horror of saying the wrong thing, of making a fool of myself, of being the odd person out.

For my students, I put that aside. For my students, I connect with people, because as much as my students need books and stories, they need to see the courage and creativity of others—the things I ask them to try on for size, to risk embodying themselves—even more. They need to meet creators so they can learn that kind of strength is alive and well in the world.

A quick review of the most commonly taught texts in American secondary schools reveals that, in the publics and privates alike, English reading lists generally share one thing in common: everyone on them is dead.

I have nothing against Shakespeare, or Dickens, or Twain (though I admit I have rather a lot against Salinger and Hemingway). There are plenty of authors who have shuffled off this mortal coil whose works provide crucial windows into human nature and the struggles we face. But there’s little that can match the power of seeing a student speak to the author of the text they’ve just read and catching the light in their eyes that clearly says this is the first time they’ve read something by a living person and also had access to them.

I build connections with other writers so my students can Skype them, tweet at them, meet them in person on campus visits, or answer questions for them on blogs about their perspectives as readers. I want them to see and be seen, to experience stories and their authors as living realities. I want my students to meet writers who will inspire them to tell their own amazing stories. And I want these creators to experience the validation of their work being written about in papers, debated in classrooms, read late at night in dog-piles of students in residence halls who hop on Discord to argue with each other about what they read long after in-room curfew.

In the end, authors and students alike want to believe they’re seen and listened to. I never really know if my students are listening to me as closely as I’d like, but I know they listen to the people I’ve brought them together with.

That’s enough to make me screw my courage to the sticking place.

Matt stops by my office as I’m working on the outline for this essay. (His name isn’t Matt, but that isn’t important.) He starts by apologizing for interrupting what I’m doing.

I try not to laugh. I’ve been flailing between writing this essay and not writing it, caroming between productivity and self-recrimination, a roaring case of impostor syndrome drowning out my ideas. Sure, Matt. Come in. Please, please, come in.

He’s anxious because the novel he’s been working on has stalled out, and after weeks of not knowing how to get back into it, he’s wondering if he’s bitten off more than he can chew.

I know the feeling. We talk about writing fanfiction as a way to give his brain a break, or to rev it up again, depending. He confesses he’s been pouring most of his creative energy into the D&D game he’s running for friends in his residence hall, and that leads to a tangled conversation about possibly using the structures of storytelling used in a game session to inform his writing. When it’s my turn to kvetch, I opine about the copyedit for my second novel which is damned near killing me. He ends up taking some tea with me and debating the utility of subgenre distinctions for writers as compared to readers. Soon, though, it has to end. We both have classes to get to.

He stops in the doorway before running down the hall. Matt tends to look me in the eye, which I like, both because plenty of students can’t bear to, and because I know I was terrible at doing it, too, at that age. Mostly, I still am.

“I wanted to say thanks, by the way.”

“Just…” He shrugs. “Everything. Always listening. Believing in me. I know it’s not very interesting and you don’t really have the time, but—”

I put up a hand to stop him. “It’s always interesting. You’re always worth the time.”

He smiles, and then he’s gone.

I don’t have time to think about that encounter until later, once I’m back in my office facing this draft again, remembering I’m also supposed to be coming up with moderator questions for a panel with Seanan McGuire next week.

I can’t help but wonder if she’d have better ideas than me about how Matt can get back into his troublesome novel.

The only way to know is to be brave enough to ask. 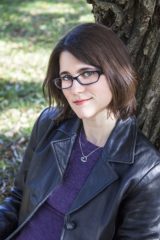 Tracy Townsend holds a Master’s degree in Writing & Rhetoric from DePaul University and a Bachelor’s degree in Creative Writing from DePaul University, a source of regular consternation when proofreading her credentials. She has served as chair of the English Department at the Illinois Mathematics and Science Academy, an elite public boarding school, where she currently teaches creative writing, and science fiction and fantasy literature, still recovering from past careers as a martial arts instructor, a stage combat and accent coach, and a short-order cook for houses full of tired gamers. Now she lives in Bolingbrook, Illinois with two bumptious hounds, two remarkable children, and one very patient husband. Her gaslamp fantasy The Nine (a finalist for the Stabby Award for Best Debut) was published by Pyr in 2017 with the sequel, The Fall,coming in June 2019. Tracy is also a columnist for the feminist sf magazine Luna Station Quarterly, where she writes about story craft and world-building. You can find her on Twitter (@TracyATownsend) or online at tracytownsend.net.