Deadly Frocks and Other Tales of Murder Clothes

Recently, while working on a murder mystery novel involving green dye, I fell down a rabbit-hole of historical research about arsenic green, and the deadly ballgowns of the 19th century.

I’ve always loved bright green clothing, so I was fascinated to read about the Victorian passion for that particular colour, how delighted they were with the bold pigment that defied the more muted shades of green previously available…so delighted that they kept wearing ‘emerald green’ garments despite the known danger to themselves and (more crucially) to the workers who made those clothes.

In 1861, Matilda Scheurer, a 19-year-old maker of artificial flowers, died tragically of arsenic poisoning. Her job had involved blowing arsenic powder onto headdresses to colour the petals, which meant she inhaled a great deal of the poison over a long period of time. In February 1862, a year after Matilda’s gruesome demise, renowned chemist Dr. A.W. Hoffman published an article in the Times called “The Dance of Death.” His work drew public attention to the huge weight of poison carried in garments like headdresses, ballgowns, and so on, in order to achieve that perfect shade of vivid green. Cartoons of skeletons dancing or displaying their fancy clothes appeared in publications like Punch, and even the British Medical Journal weighed in on the topic, also finding it humorous:

“Well may the fascinating wearer of it be called a killing creature. She actually carries in her skirts poison enough to slay the whole of the admirers she may meet with in half a dozen ball-rooms.” British Medical Journal, February 1862

At this point, arsenic green had been fashionable for decades. Queen Victoria herself was sketched in a famous green ballgown six years earlier. Factory workers had likewise been reporting symptoms such as open sores, stained hands, vomiting, and so on, sometimes leading to death.

The dangers of poison in everyday items of Victorian England was a controversial, highly-discussed issue at the time, with various items such as wallpaper, cosmetics, and soap also featuring arsenic—given how often newspapers called attention to this shocking fact, the results from Hoffman’s study of the fabric industry were neither controversial nor surprising. His investigation was funded by the Ladies’ Sanitary Association…the same upper-class women who were now being blamed and shamed in the media for their vanity, responding to long-held beliefs that there was something sinister in the dye-vats.

If it involves ladies and fashion, of course, it counts as frivolous even (or especially!) if it’s also deadly. Hence the reporting in the media so often making a joke of it, even as they accused the women of cruelty and murder.

Knowing that these poisons were not only present in the fabrics, but actively causing harm—far more to the people (mostly women) working with the pigments than to the men and women wearing them—did not slow down the industry. In fact, a new fashion—one for dresses decorated with artificial fruits and vegetables—began in Britain a year after Dr. Hoffman’s findings were discovered… and yes, the combination of toxic green pigments with dresses that looked edible did actually lead to some horrific accidents involving children, thanks for asking.

Arsenic dye was not the only 19th century clothes-related hazard, from crinolines catching fire (at the rate of three deaths on average per week according to the New York Times in 1858) to the mercury poisoning that was common to the hatter trade, another sinister fashion joke famously captured for posterity with the Mad Hatter character in Alice’s Adventures in Wonderland by Lewis Carroll. Deaths and illnesses caused by the fashion industry, however, were talked about far more as a female issue than one affecting everyone. The narrative around the risks of women’s clothing was quite different to that of men’s clothing…and that gender divide became far more dramatic as the 19th century progressed. The female victims of fashion-related illness or death in Victorian England were usually considered to be at fault—such as Oscar Wilde’s half-sisters, who died in a tragic crinoline conflagration—for caring about frivolous things in the first place.

There’s something weirdly mythic about the idea of wearing a garment that could kill you. From Ancient Greek legends (Heracles met his death by a shirt soaked in the blood of a poisoned centaur; Medea murdered her rival with a toxic gown that burned like acid) to fairy tales (Snow White suffering through a deadly too-tight corset, the Red Shoes that dance their wearer to death…), the idea of a beautiful garment that kills its owner is both memorable and dramatic.

Especially when that death is intentional. And we’re back to gender stereotyping, of course, because historically poison has always been framed as a woman’s weapon. Over the centuries, women who are publicly disliked have often had accusations of poisoning used to damage their reputations, along with accusations of adultery and witchcraft.

Catherine De Medici began a fashion for scented or “sweet” gloves when she married into the French Court. Gloves scented with pomegranate, orange blossom, violets, etc. made a practical as well as attractive gift. They were not only used to mask personal smells but also to cover the horrible scent of the leather itself, thanks to a fairly gross tanning process. Catherine was so hated by the French people, who spread rumours about her being a sorceress and a murderer, that everything she did—even making gloves smell better—was interpreted as dangerous and sinister.

So of course, when her enemy, Queen Jeanne of Navarre, died not long after receiving a pair of scented gloves from Catherine, guess who was blamed? Modern historians now believe tuberculosis was a far more likely cause of Jeanne’s death, but a glamorous fairy tale involving a foreign woman and poison is always going to capture public imagination. In this case, the rumour that Catherine had murdered her daughter Margaret’s future mother-in-law only weeks before the wedding fueled a wave of civic unrest that led to the infamous St. Bartholomew’s Massacre.

When Alexandre Dumas wrote up the story years later in his novel Queen Margot, he included the poisoned gloves story as a fact. Why would he not? It’s a great story, now preserved forever in fiction and myth as well as rumour.

Speaking of made-up facts, one of the most common hits you get when searching for stories about poisoned dresses is the movie Elizabeth (starring Cate Blanchett), based on the life of Elizabeth I. Sadly, this awesome scene in the film is one of the made-up bits and not one of the ‘real history’ bits. But, once again, it’s a great story.

Like in history, myth, and fairy tale, fantasy fiction is rife with poison. From iocane powder in The Princess Bride all the way through to modern books like Sam Hawke’s City of Lies and Claire Luana’s The Confectioner’s Guild (based on a poisoned cupcake!) we do love a juicy dose of something toxic. But what about deaths caused by clothes in our SFF? I’ll admit, I struggled to find a wide range of examples.

Poisoned or deadly crowns are a popular trope, found in the works of Kristine Kathryn Rusch (a lead character is assassinated with a crown dipped in holy water) and in the cartoon Adventure Time, where the Ice King’s tragic backstory involves a cursed crown that destroyed his memory and replaced his personality. (There’s also the death of Viserys in A Song of Ice and Fire involving a crown of gold that turned out to be…either more metaphorical or more literal than he expected.)

Terry Pratchett’s Discworld is full of examples of sinister clothing, largely because this is a world where stories and myths take on literal power, so a crown might easily start putting ideas in your head. In Sourcery, the Archchancellor’s hat is actually an antagonist in the story, an idea that is later used to great effect in the children’s TV series Yonderland, with a wig. Also in the Discworld, one of the teachers at the Guild of Assassins has enough poison rings on her fingers to ‘inhume’ a small town…

In Rick Riordan’s Percy Jackson series, we get a modern re-interpretation of the death of Heracles, with a t-shirt soaked in centaur blood…that causes hives in the wearer rather than death, because this is a children’s story.

In Lois McMaster Bujold’s Winterfair Gifts, a string of fake pearls prove to be poisonous…and in Harry Potter, there are all manner of deadly jewellery examples, from the cursed necklace used in an attempt on Dumbledore’s life, to the various Horcruxes that are wearable. Back to ASoIaF/Game of Thrones, and Sansa Stark finds herself an unwitting accomplice to murder when poison is smuggled into a wedding banquet in a bead of her hairnet (and in the TV show, a necklace).

Clothes in fantasy fiction, myths, and fairy tales often take on symbolic significance. They represent magic and beauty and transformation: the right gown can turn a maid into a princess, and it takes a crown or a ring or a lost slipper to prove identity.

So many classic stories turn on the idea that it’s a shocking revelation that something beautiful could in fact be horrible or deadly—because of course, there’s that toxic idea built into the bones of so many cultures that prettiness and ‘perfection’ must be inherently virtuous.

Poison, or other deadly consequences, concealed in clothing (especially women’s clothing) carries a certain narrative weight, not because we don’t expect it, but because we have been trained by ancient myths and stories to look for danger behind the glamour.

My first instinct is always to challenge the ways that women are criticised historically. So I was quite prepared to defend those ignorant young ladies with their giant, bright-green frocks when I began my research. I assumed this particular historical trend was a bewildering glimpse into how humans so often keep doing whatever they want despite knowing it is bad for them. But the more I delved into the subject, the more I learned about the suffering of the factory workers and the dressmakers—and most importantly of all, that people kept buying and distributing these garments, knowing of the dangers—I start to wonder if the cartoons of beautifully dressed skeletons had it right the first time. This was not a case of tragic irony: pretty thing is actually poison. Everyone knew: from the media and doctors through to the government itself. It took several decades of mockery, medical advice, and the protest action of women’s groups for the use of arsenic green to finally fall out of fashion in Victorian England…and a full 34 years after the death of Matilda Scheurer for the British government to regulate against the use of arsenic in clothing, long after France and Germany passed legislation to deal with this ongoing health risk.

Perhaps, after all, the wearers of those frocks felt that dancing on the edge of death (not their own death, naturally!) merely added to their beauty.

“Now if the ladies will persist in wearing arsenic dresses, a ball will be as deadly and destructive as a cannon ball, and nearly everyone who dances will be food for (arsenic) powder.” Punch, November 1862.

Alison Matthews David, Fashion Victims: the Dangers of Dress Past and Present 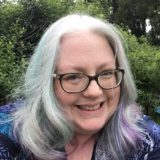 Tansy Rayner Roberts was the first Australian woman to win a Hugo Award. Her fiction titles include Musketeer Space, Tea & Sympathetic Magic, and the Creature Court trilogy, and she also writes murder mysteries under the pen-name Livia Day. Her latest non fiction book release is From Baby Brain To Writer Brain: Writing Through A World Of Parenting Distractions (Brain Jar Press). You can hear Tansy on the Verity! podcast, and subscribe to her newsletter: https://tinyurl.com/tansyrr