Discard the Sun, for It Has Failed Us

Every four hundred years, I make my pilgrimage to the Sol System, as every Decanus of the Zon has before me.

For the past three hundred waking cycles, the Captain has seen fit to impede my path on my morning walk to the solarium. Not for a full audience, but to spout the same Extra-Solar rhetoric I’ve been bombarded with these many centuries.

He is not a scholar of history, physics, or theology. He simply sees folly in the work, waste. His assignment to my ship leads me to believe my time as Decanus may be approaching its end.

He thinks we maim our future.

And yet, the past still calls…

Moths are the saddest part of an evening storm. They know they’re in danger after the first roll of thunder—can feel it in the pressure change, the thickening humidity.

They flutter against the windowpanes, demanding Sadie save them. She cries, but Gran won’t let her open the sash.

“They’d only suffer in here, child. You have to wait for the resurrection.” Sadie’s eyes get big. “The wha—?”

“I implore you again, Decanus, discard the sun.” The Captain does not hide his distaste. “The star should have died an epoch ago. It’s wasteful, pouring resources into something so useless because of nostalgia.”

Sol is forty-percent brighter today than it was when Sadie lived. The oceans she knew? Boiled away. The continents she recognized? Victims of plate tectonics. The Earth’s surface is dead, the atmosphere acidic.

But the planet has not been consumed by the fiery burgeoning of the sun’s red-giant stage. This we have prevented, by feeding the star.

Without my pilgrimage, the sun would die.

I will not let its light extinguish.

Because, before Sadie, there was Umma.

Umma prays and sacrifices before every harvest, every planting, every table. It’s necessary, because of the dangerous year, when the dark disk of the moon moved in front of the sun, and a storm flattened her crops.

Perhaps the sky had not been mad at her, but when she prayed for mercy, it wasn’t long before the light returned.

Now she always sets aside a tribute.

It’s not unreasonable for the sun to demand respect.

“Why should we feed it?” the Captain blusters. “We can do so much with the hydrogen—make building materials for the outposts in Gulla, use it to clean Winsoar’s atmosphere. This is a waste, you must see.”

He doesn’t ask about the Communion. I doubt he believes it’s real. That when I use my soul as the ‘portation filter, the sun sends something back.

I don’t think he knows it’s alive. That it’s grateful.

[past the past of the past]

Why is it so cold now? the others ask. The skins are not thick enough to keep us warm, and the ground is too hard to bury the dead.

It’s because the sun is sad, Eerak thinks. The cold began after the flash in the sky—when a far-off star grew big before winking out.

Then the sun drew away, distant.

“It’s sad,” she insists, but no one listens. They march on, the migration all-important.

I cannot stand his ignorance any longer. “The sun is the only god empirically proven to exist,” I yell. “It created life on Earth. Gave life-sustaining energy. It gave and gave and gave, and—no matter our millennia of trying—our sacrifices could not reach it.

“It resurrected the moths—its warmth drying their wings. It encouraged the crops, kept the people of Sumer fed. It saw an empathetic girl on her way across a land bridge and vowed not to let an ice age last forever.”

He frowns—the history inherent in the Communion is not his to know.

“When I come to replenish the hydrogen, I am repaying part of the greatest debt humanity has ever incurred. We owe it everything, and how we treat creatures we do not understand—”

The captain stares, silent. I can see he does not believe me. He has not been genetically engineered to talk to stars—to filter pure hydrogen through his soul to feed them, and thus find quantum connections to the past—and lacks the imagination to envision the lives of those who can.

“Would you abandon your grandparents once their bodies have become frail? Would you forsake your lover simply because they’ve changed with age? If there is love, there can be no desertion. That is why Sol lives.”

The captain does not protest, but his expression does not soften. I don’t know if I’ve changed his mind, or if he will ask me to abandon Sol again tomorrow.

Even as the universe shifts, I know I am not useless. My faith in the importance of this empathy, this sacrifice, is not useless. For now, I am in charge, and the sun will live for as long as I can sustain it. 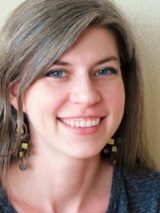 Marina J. Lostetter’s original short fiction has appeared in venues such as Lightspeed, InterGalactic Medicine Show, and Flash Fiction Online. Originally from Oregon, she now lives in Arkansas with her husband, Alex. Her debut novel, Noumenon, is an epic space adventure starring an empathetic AI, alien mega structures, and generations upon generations of clones. Marina tweets as @MarinaLostetter and her website can be found at lostetter.net.