Not a lustful fisherman—

someone caught in the battle

between man and nature

as his eyes fill with ocean—

but a small black boy

dragging a stick against

the evening shores of

She is leaning against the

so he sees her human first:

her dark skin, her hair high and wide,

pearled and shelled, brown-tinged in the light;

he almost confuses her for his mother,

He calls out to her in his child voice,

her voice is the entire Caribbean,

the splash of flying fish, the mosquito whines,

tinkling of steelpans, drums at the Mas

he’s too young to play in.

Jump down to me, she says, arms held out,

you are like my blue-black boy, my sea child,

and before he knows it, he is all wet,

she is kissing his cheeks, a hand through his waves.

He wraps his legs around her hips,

feels the cool sweep of fish,

like the ones his grandmother buys at the Carenage,

his mouth opens, an oh!

Now, the coast splits the sky from the sea,

his laugh mixing and becoming one

with the green wash, the orange clouds,

the symphony of this warm nature

wrought with a violent history:

water bringing and taking away

In the distance, the pea dove asks—

(Editors’ Note: “Fin” is read by Joy Piedmont on the Uncanny Magazine Podcast, Episode 36A.) 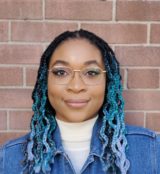 Terese Mason Pierre is a writer and editor whose work has appeared in Hobart, The Puritan, Quill and Quire, and Strange Horizons, among others. Her work has been nominated for the Rhysling Award, the Ignyte Award, and Best of the Net. She is the co-Editor-in-Chief of Augur Magazine, a Canadian speculative literature journal, and she is the author of chapbooks, Surface Area (Anstruther Press, 2019) and Manifest (Gap Riot Press, 2020). Terese lives and works in Toronto, Canada.