For All Those Who Sheltered Here

The first thing I remember was the heat of the sun on my tender skin, the curl of a single leaf opening. As I ate sunlight and drank rain, my limbs grew in number and size. See my trunk so thick and fine. See my leafy canopy.

Those first few winters, when I was small and my branches bare, people hung blue bottles on me. At night, I’d hear the spirits giggling and whispering, as they scampered forward on light feet, drawn to the blue. And they’d curl themselves inside the bottles, like pill bugs, only to burn out in the light of day, their trembling cries carried along the wind.

The best thing I ever did was lead people to freedom. Some groups were small, only two or three, while others were as big as eight. They never stayed long, but they touched me with gentle hands, found the moss on my side and used that as direction.

I liked it when they unrolled a cloth and sat around me, eating. I listened to their soft voices and swayed to their songs. In the summer, I asked the wind to blow, to lick the sweat from their necks. In the winter, when I had little shelter to give, I asked the wind to leave them be. Many of them would pat me before they left, would turn their faces up high and admire my leaves, my many branches. They talked to me like a friend.

They came less and less, and one day, it took me a while to think about the last time they had come. There were no more groups whispering the word “north” like a prayer.

Maybe they had finally found their freedom.

The worst thing I ever did was kill a man. You might say it wasn’t me that did the hanging, but he died swinging from my branch.

As soon as I saw the many little fires bobbing in the dark, I began to tremble. I didn’t know what those people might do. And a fire out of control is a terrible thing. Sometimes, when I think about that long night, I wish they had burned me down. Because at least then I wouldn’t have that memory living in every ridge of my being, stuck inside me all the way to my heartwood.

They dragged the man behind them or pushed him out in front. I yelled at them, I’m here for shelter, I’m here for comfort! But they didn’t hear.

When his battered face pressed against me, I whispered, Put your arms around me, I’ll hold you.

His tears were salty, a gentle sting. His blood washed over me, a bitter rain.

The rope cut into me and into him. Everything was noise and chaos and terror. And yet, the people on the ground celebrated. They took their pictures, they put their sweaty hands on my trunk as if I were some kind of monument. They used me like I was a willing participant. When they’d had enough, when there was no more body to break, they left.

And then it was just me and the man whose life I had taken. I whispered to him, I’ll be your shelter until your people come. I’ll protect you from the sun and the rain. The wind moaned in the wake of what had been done. I asked her to stop, because with every breath she blew, the rope creaked a haunting song.

I bore that man until his family came to take him.

The person I loved the most was the wise woman. For a very long time, she came. The first time I spoke to her, I expected no reply, but she smiled up at me.

“Oh, we speak the same language,” she said, running her hands along my trunk. When I smiled back, she saw it. “May I have three leaves today?” she would ask, never taking a single thing from me without my permission. I gladly gave her leaves and even small strips of my bark. She always thanked me and repaid me with water kissed by the moon or copper pennies or sometimes, a drop of rum. Many nights, she pressed her back against me and told me stories of her life, of ancestors whose names she knew and ones she didn’t. Of how she trusted the dirt and the plants more than people. My shade was her blanket, my leaves her coat. I was never happier than when she danced with me, her bare feet sliding over my roots, her voice mingling with my own in a loud warbling cry.

“The birds are the jewels in your crown!” she sang, her arms held high, her head thrown back.

The person I hated the most, and pitied just as much, was the man with the ax. In his drunken rage, he cut me until I bled.

I screamed and begged for him to stop. It only ended when he pressed a hand against his chest and slumped to the ground.

Afterward, I was in so much pain. I lost leaves. My tears stained my trunk. Even now, I bear the scars of that day, jagged tears in random places. For the longest time, I felt ugly, unworthy.

But the wise woman came and healed me, sliding her hands into the ragged spaces. She kissed my scars. She told me I was beautiful.

When she died, they didn’t bury her with me, which is what she wanted. They carried her far away, where they could keep her near.

Sometimes, when I’m very still, the wind carries her voice to me in a kiss.

Ah, here come the man and the boy. They live in the house over there. He swings a couple of ropes over one of my low branches, but this time, I’m not scared. He works with the ropes and a board, a smooth wood piece.

Are you happy? I ask, and the board tells me she is happy to be of use.

When the man is finished, he stands back and admires his work. Then he pats my old trunk again, like he always does. He lifts the boy onto the board and pushes him gently. Loud squeals ride on the air. Their joy washes over me, wriggling its way into my bark, where I grip it tightly.

“This tree’s been here a long time,” the man tells the boy. “I bet it’s seen everything.”

I have, I tell him, although I know he can’t hear.

At sunset, the other two come, a man and his son. They’re different now. Their bodies shimmer in the fading light, and with each step, the son grows smaller until his head is no higher than his father’s waist.

They stop and look at the rope swing.

Yes, we’ll change it together, I agree, and this time, they hear me.

How do you ask forgiveness for murdering a man’s son?

Before I can speak, he slips his fingers inside one of my scars, a light touch heavy with pain and regret. In that way, we forgive each other.

He lifts his son onto the board and pushes him gently. The boy swings and swings and swings until daybreak, his laughter rising through the air, washing over my leaves like a soft rain. The father pats my old trunk before they go, fading away into shimmers with each step.

They come back when the nights are still, and the sound of the boy’s laughter burrows its way into the grass and the flowers, into the ropes and the wood.

And the man in the house over there sometimes looks out the window, at the swing moving higher and higher, a deep crease in his forehead.

I wonder what he tells himself as he stares across the yard. Probably that it’s only the wind, although, if he looks closely, he can see that my leaves don’t stir. If he listens closely, he’ll hear that shadow laugh. But I know he tells himself it’s just the wind, it’s someone’s windchimes tinkling away like mad.

We know the truth.

(Editors’ Note: “For All Those Who Sheltered Here” is read by Matt Peters on the Uncanny Magazine Podcast, 43B.) 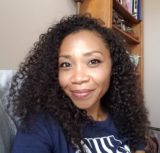