Alex Bledsoe is the sort of writer who reaches straight into the heart of truth and gives no quarter. Deeply grounded in the southern culture of his youth, he dances with the mythos of the South while not falling into its stereotypes. In reading his work, the reader has the impression that Alex Bledsoe has yet to meet a trope which he hasn’t wanted to subvert with abandon. He shows us hard–boiled noir detectives can navigate nimbly through sword & sorcery fantasy in the Eddie LaCrosse series, while in the Memphis Vampire series he deftly settles a turn–of–the–century Welsh vampire in the steamy world of 1975 Memphis. With the Tufa novels, he creates a new American mythology, weaving tales filled with music and heartbreak, and in the Firefly Witch series he gives contemporary romance his own delightful urban fantasy spin. A prolific writer with over 200 short stories to his name in addition to the novels, Alex Bledsoe is a writer whose fans cannot wait to see what weird and wonderful tale will spring forth next. We are thrilled to have a chat with him about “I Seen the Devil” and what made him the writer he is today.

Uncanny Magazine: “I Seen the Devil” has the feel of a tall tale told around a campfire, complete with first–person narrative and a sting at the end. You’ve been hailed as a southern writer with a strong connection to that rich, storytelling culture, part of which is a tradition of oral storytelling. Did that type of storytelling have any impact on you as a young writer developing your craft?

Alex Bledsoe: Not as a young writer. Back then, I wanted nothing more than to be physically and creatively as far from home as possible. “Home” meant the kinds of friends—and family—who had nothing but contempt for the things I enjoyed, and by extension, me. And with the exception of my cousin Jimmy Dick, we had no raconteurs or storytellers. And more crucially, no one valued such things.

But for good or ill, the South was the place I best understood, and since I wanted to set many of my stories in the contemporary world, I found myself using southern settings. I also started appreciating some of the literature I’d earlier resented, such as Faulkner, Bobbie Ann Mason, Walker Percy, etc. All the best southern lit has a hint of the otherworldly about it, whether it’s merely in the descriptions, or in the way, as Faulkner said, “the past is never dead.”

Uncanny Magazine: The protagonist of the story is retelling this story as an adult so we have a dual perspective: one where, as a child, he is taking words and actions at face value; and another where, as an adult, he is seeing the subtleties of sarcasm, deference, and the thousand lies adults tell without thought. Since the boy is exactly the age you would have been in 1973, how much of yourself did you put into the story?

Alex Bledsoe: I suppose he’s a simpler version of me, maybe even the kid I wished I’d been: one who fit in with his surroundings. It’s hard to do in–depth characterization in a short story, particularly one as short as this, so what’s there is minimal, and done with implication. A lot of the details, though, are absolutely real: the description of the town, Tater’s old truck, and so on. There was even a real Maso, and we did relate to him just as the narrator describes.

Uncanny Magazine: In addition to your extremely successful novels, you’ve written over 200 short stories. You’ve said in past interviews that you don’t think of length when beginning a project but, rather, follow Kurt Vonegut’s advice and start as close to the end as possible. Have you ever had a story get away from you or refuse to let you go? Is there ever any temptation to revisit any of those worlds and expand their boundaries?

Alex Bledsoe: They don’t get away as much as they used to, because I’m better at sensing which ideas are short and which are long. Some have surprised me: the first chapters of both my vampire novels, Blood Groove and The Girls with Games of Blood, are actually short stories that I realized later made good jumping–off points for novels. So yes, sometimes I revisit them.

I keep intending to go back and revisit the characters from my short story, “Next–to–Last of the Tiger Men,” about a pair of modern big–game hunters (well, “modern” in that they’re set in the 1990s, when I first wrote them). Hunting isn’t a very PC topic right now, and I’m still waiting for a novel–length idea to come along. But I love those characters, and would really like to do more with them.

Uncanny Magazine: When beginning a novel, you’ve stated you start with “What if?” Do you apply that same principle to short stories? And, if so, what was the “what if” of this story?

Alex Bledsoe: Short stories, by their brevity, thrive on “what if” inspirations. For example, I wrote a story about mermaids for the anthology “Not Our Kind,” and my inspiration was, what if mermaids were as prejudiced as anyone on land?

“I Seen the Devil” had a few inspirations. One was the character of Maso, who I’d always wanted to use but never found the right place. Another was reading about a guy who lived in a hole in his yard by choice, which I found fascinating. The last was a Tony Joe White song with the impossibly long title, “They Caught the Devil and Put Him in Jail in Eudora, Arkansas,” from 1971, that I’d always loved and wanted to turn into some sort of story. So the “what if” came from the idea of “what if all this happened in my old home town, to people like me and those I knew?”

Uncanny Magazine: You wrote about how being a southerner has affected your writing and said that it inculcated you “…with the importance of the physical place to the stories that happen within it.” Now that you no longer live in the South, has the change in geography affected your writing? Has being removed from environment changed your perspective on the culture in any way?

Alex Bledsoe: If anything, it’s made me more conscious of my southernness. I’ve lived in Wisconsin for over ten years, but I still don’t feel qualified to write stories about it, or at least about people who are native to the region. There’s just something about the place you’re raised, whether you like it or not, that soaks into you.

As for my perspective, it’s made me glad I no longer live there, and that I’m not raising my children there. The South has a lot of good qualities, but they’re so entangled with prejudice and religion that it’s impossible to separate them. Some of the bravest people I know are the ones who have stayed, and who insist on being true to themselves and following alternative lifestyles and beliefs in spite of the pervasive bigotry all around them. I guess deep down I’m not that brave.

Uncanny Magazine: In reading this story there is a sense of treading landmines. The boy is very aware of the volatile nature of adults. He has learned to navigate through this world as deftly as he navigates the path from his house to Tater’s. It is an interesting question to ponder whether the boy is frightened that the devil exists or comforted that the devil can be caught. As a writer who is also a parent, which perspective do you prefer?

Alex Bledsoe: I suppose every childhood consists of navigating a certain number of land mines, with some more devastating than others. And kids, being both resourceful and without the perspective to really comprehend, simply think that’s the way things are supposed to be. I know I grew up ignorant of a lot of really terrible things that went on in my family and in the town around us, because I had nothing to compare it to. The narrator is a little more self–aware than me, but that’s because I don’t think readers would believe how utterly clueless I really was.

The world is filled with devils, and as a parent, I hope my kids don’t discover them until they’ve already learned the skills to defeat them, or at least negate their influence.

Uncanny Magazine: Thank you so much for taking the time to give us such gracious insight into your work. 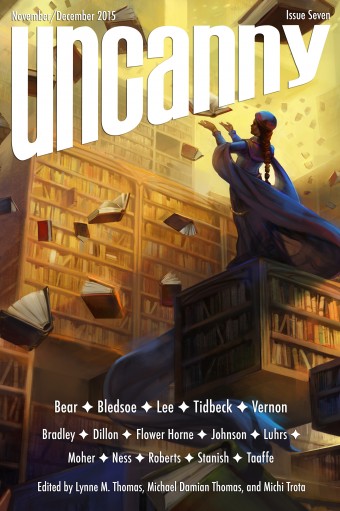