This interview is with Beth Meacham, Senior Editor at Tor Books, which published Jay Lake’s final collection, Last Plane to Heaven, from which this month’s reprint is drawn.

Uncanny Magazine: How did you first meet Jay? What struck you the most about his work?

Beth Meacham: I first met Jay through his work—I’d noticed some short stories of his, so when Jennifer Jackson, his agent, submitted his novel Mainspring to me, it went to the top of the reading pile. It was one of those manuscripts that, once started, I didn’t want to stop reading—this is always a good sign in a book! And I found myself making notes as I read, also a good sign.  They were moderately extensive notes, so I sent a long email along with them, asking if the author was willing to do this much work on the book. Some writers, you know, are not willing to really dig into revisions. That was a Thursday. On Monday, I received a revised manuscript, which pretty much answered that question! Jay included a note saying that if there was anything else, I should let him know.

I made an offer on the book a few days later.

I didn’t actually meet him in person until after that, when we were at a Locus Awards. Jay was the hardest working writer I ever met. Everyone knows Party Jay, loud Jay, fast–moving object Jay. But he worked at his craft and he worked hard. He wrote every day, fluidly and fast. I think my biggest contribution to his work was getting him to slow down and dig deeper, and recognize when good enough wasn’t good enough.

Uncanny Magazine: What was the story that drew you into his writing, and what about it appealed so much?

Beth Meacham: I loved Mainspring. I loved everything about it. The world, that crazy alternate clockwork universe that he so brilliantly figured out. The history of the world, the politics, the theology, the construction of the planet. And I loved Hethor, the main character—so bewildered at being the chosen one, so willing to try, so uncertain of success. I’ve always thought that the most endearing characteristic of Frodo was his sense that he didn’t know why, but if it was up to him, then he’d try. Hethor is very much like that. You can only get motivations like that in a world where the deity is manifest.

Uncanny Magazine: Last Plane to Heaven contains only a fraction of Jay’s publications. How were the stories selected, given how prolific Jay was?

Beth Meacham: They’re a combination of Jay’s favorites and mine, and I’m sure we had different criteria. A lot of it was determined by the decision to go with the angels motif, which was really surprisingly prevalent for the work of an atheist.

Uncanny Magazine: Did you have a specific plan for the ordering of the stories? Does it vary from collection to collection, or do you typically use a relatively standardized method of organizing the stories?

Beth Meacham: You know, I can’t really answer that. I do it by feel. Does this feel right? Does this order resonate in that deep sense of thematic rightness? Do you the reader move from story to story in a pleasing way? I have no standard method, no system. Also, in this case, I deferred to Jay in the grouping of the stories. He knew what he wanted to say to to the world.

Uncanny Magazine: Is there one experience with Jay or his work that, to you, epitomizes who he was within the industry?

Beth Meacham: It was only after his death that I know the answer to this question. And that is discovering how many writers, all across the country, he helped financially when they were in need. He paid for workshops, and classes, and helped with medical bills or rent. He never told anyone, he never permitted public thanks. He wasn’t a rich man, he didn’t make a huge amount from his writing, but he made a good living at his day job. He took care of his family, and whatever was left he gave away. Jay cared about others in a very concrete kind of way. 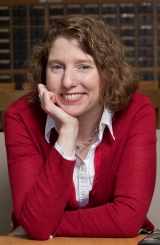 Three-time Hugo Award winner Lynne M. Thomas is co-Publisher/Editor-in-Chief of Uncanny: A Magazine of Science Fiction & Fantasy with her husband Michael Damian Thomas. The former Editor-in-Chief of Apex Magazine (2011-2013), she co-edited the Hugo Award-winning Chicks Dig Time Lords, as well as Whedonistas and Chicks Dig Comics. She moderates the Hugo Award-winning SF Squeecast, and contributes to the Verity! Podcast . In her day job, she is the Curator of Rare Books and Special Collections at Northern Illinois University, where she is responsible for the papers of over 70 SF/F authors. You can learn more about her shenanigans at lynnemthomas.com.