There is, in Aotearoa New Zealand, a tree called the horoeka. It is heteroblastic, which means that the juvenile form of the tree is very different to the adult form—so different, in fact, that the two forms were historically believed to be different species.

It’s easy to see why. In the botanic gardens, the leaves are dark and unfriendly and leathery. Horoeka is the Māori name, but the European settlers called the tree lancewood: the young leaves are long and sharply toothed, obnoxiously defensive. The older leaves are half the length of these green-toothed spears, and twice the width.

They really do look like they come from completely different plants. And the truth is, no one knows why the horoeka does this. There are a number of theories. One is that, as this tree evolved alongside the moa (the large flightless bird of Aotearoa, the females of which could stand at over three metres tall), the tougher juvenile leaves were less likely to be eaten. The mature leaves, on the other hand, were high enough to escape significant grazing. If this theory is true, then the horoeka is a plant that’s firmly rooted in a past and spectral landscape. With the extinction of the moa, the horoeka’s strategy is redundant, and its form is an artefact of an ecology that no longer exists.

There’s something very lonely about the horoeka. All its young leaves are toothed for ghosts. The adult leaves, the ones that come with height, well. They’re far more defenceless, but then there’s nothing that can eat them now. Nothing that could ever have eaten them. We are lacking in herbivores. Large ones at least, the ones with reach. There was only one animal in this country with jaws that stretched so far for feeding, and moa have been gone so long that even the stories of them surviving in the back blocks of bush have lost their strength.

The world is full of such spectres. As we enter what Elizabeth Kolbert calls the sixth extinction, the depopulated wastelands of our world become sites of the ecological gothic, with the spectres of the dead apparent in the forms and functions of the surviving organisms. Added to this is the prospect of reanimation: the almost necromantic desire to raise the dead, whether they be moa or mammoth, and to insert them back into landscapes that still bear the biological imprint of their presence in the forms of the organisms that once lived alongside them.

It’s a science fictional idea, this resurrection. In a sense it’s time travel, the returning of an ecology to an earlier form, one that’s more sudden and more drastic than rewilding. There is, too, something of the horrific about it but really, which is the more horrifying thing: raising the dead, or razing the planet? We live in an age of ecocide. The increasing focus on climate fiction within the speculative genres makes this clear. We consume science fiction on the death of insects, the death of bears, the hideous empty expanse of ocean. A lot of climate fiction extrapolates to the death of ecosystems, for instance the melting of polar ice and the destruction of tropical rainforests. How does this play into the idea of the ecological gothic? What ghosts are we storing up for ourselves?

They were so well adapted for the world that they lived in. Horoeka, which held onto juvenility, onto inedibility, for metres. Moa, which gorged on the gap between ground and canopy. And us, who brought our hunger with us. One toothless organism eaten, another old and slack-jawed in response to a threat that’s nothing now but bone. And us, milk-mouthed because our young are never raised for grazing, us who spit out young teeth for meat and who gorge ourselves on birds.

Another name for milk-toothed is deciduous. When the milk teeth are lost, it’s called exfoliation. (The horoeka is not deciduous; it does not defoliate in winter.)

The roots of the milk teeth are dissolved and reabsorbed by the stronger teeth that come after. (The sharp toothed serrations are, in the older leaves, softened into rounder shapes.)

This is a land of birds. Aotearoa, the last major landmass to be colonised by humans, and there was nothing here that evolved into a match for the teeth that we brought with us, for the spears so very different than those which grow on lancewood. The moa got eaten up, and all the teeth they left behind were on a plant that tried to defend itself from eating.

By the time I lost my milk teeth, all the moa were long gone, nothing more than bones in the bush. There was nothing left of them to bite, and nothing that could take their place. Certainly nothing in my mouth evolved alongside the horoeka’s heteroblastic height, and its teeth are now redundant as the sharpest of mine. I’ve the canines for carnivorism, but those teeth were never meant for vegetarians and I don’t eat meat.

It’s a funny thing that, between the three of us—me, the moa, and the horoeka—it’s the two with the sharpest teeth that no longer need them, and the one that never had them that needed them the most.

Still, what ghosts lack in defensive ability they make up for, perhaps, with staying power. Not everyone leaves a landscape so moulded around them, a monument to past existence. In the museum next to the gardens there’s a moa skeleton, laid out in a glass coffin like a dead fairy tale, its neck stretched out at my feet. I hold my arms out in parallel. One hand at the base of its skull, the other where vertebrae end. We are a match.

That bird, coffin-confined and with mummified feet…what if we could bring it back? Frankenstein the thing back into existence. Presumably we wouldn’t act as Frankenstein did, sending it off into the wilderness to raise itself. It would be too precious for that, the effort of resurrection would, I think, confer some protection. Yet if science fiction has one particular strength over the other genres, it’s that it can hypothesise future responses to scientific and social developments. There’s got to be more to it than theme parks. Would the possibility of resurrection make us even more indifferent to the ecological gothic, make us believe that no matter what, recovery was possible, in a sort of scientific sorcery that absolves not only guilt but responsibility? It gives new meaning to blasted heath, if that heath withers under drought. What ghosts would we see, if we walked there afterwards? Just what can science fiction predict for us about the ecological gothic, and our relationship with it?

I have a climate novella coming out next year, from Stelliform Press. Called The Impossible Resurrection of Grief, it looks at this very theme. Social and scientific response to the increased manufacturing of spectral landscape, the determined indifference to biodiversity loss, results in the rebirth of lost species. This, ultimately, is a gesture of enormous trust— but how can that trust be justified, if those recreated organisms return to a world where that indifference is still the norm?

There would have to be a sea change. We have so little time left to come to terms with the ghosts that we’ve made.

Moa have only been gone a few hundred years, not nearly long enough for the land and everything that lives there to evolve around its absence. If that resurrection ever happens, it’ll come with a determination to keep our teeth to ourselves this time, to not bite into a toothless creature that itself might feed on the teeth of another organism. The ghosts, then, would be us…a thin reflection of what we once were to landscape—blunted teeth and lighter feet and nothing left so far in the fossil record, not like the others.

But that, perhaps, is life in the ecological gothic, where ghosts trade their spectral status, where they climb out of coffins and file down their own teeth, gone from milk to wisdom perhaps, rounding down with age. This is how we learn to live with ghosts—how we learn to let them live as they are, and as they might be.

As a species, we are very good at ghosts. We’ve made more, perhaps, than any other organism. The only thing that’s outdone us in apocalypse is asteroid. Climate change is our latest attempt at mass extinction, and, as an isolated archipelago rich in biodiversity—as isolated archipelagos tend to be—we have to come to terms with the ghosts we’ve created, and the ghosts that our inaction is going to result in. Reinterpreting what is left as the ecological uncanny, as sites for spectral transformation is surely a perspective that is long past due. After all, we walk among the dead already, and we do it daily. 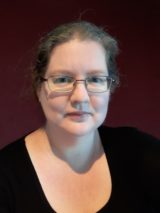 Octavia Cade is a Kiwi writer with a Masters in biology and a PhD in science communication. She lives in a land of dead birds and would totally resurrect the moa if she had the chance. (Her botanist self feels deeply sorry for that poor, lonely horoeka.) She’s the author of over 50 short stories, which can be found in markets such as Clarkesworld, Asimov’s, and Shimmer. In 2020 she was a visiting artist at Massey University in New Zealand.