Myth Has Momentum, or: How I Accidentally Deified a Jar of Jelly

As an author of various flavors of science fiction and fantasy, I’ve spent most of my life deliberately creating mythologies. I deal in gods and demons, heroes and villains, dragons, imps, tricksters… Maybe that last one most of all. My first successful novel was WebMage, which ends with the protagonist backing into becoming a power of chaos and a face of the trickster.

That’s not where I set out to take him when I started writing the novel, but that’s where he ended up, because stories have weight and shape, and we as writers are only partially in control of our creations. Some of that is narrative necessity. Some is the interaction of conscious and subconscious creation. Some is pure serendipity, and that’s what I’m going to talk about now.

Back when I started down this road, I used to think I had more control of the process of creativity than I do. But my brain creates almost independently of my will, which is an effect my wife, Laura, refers to as leaking weirdness. The perfect example of this is my microfiction series the Dragon Diaries, which is a collection of silly, Twitter–length observations from the point of view of a syntactically challenged dragon.

The Dragon Diaries were an accidental project. I was deathly ill a few years back—too sick to write anything coherent or even to watch a movie. This is not good for a brain which runs on narrative, and after a fairly short time I started coming up with these fragments of dragon–thought and shared them with my wife whenever she came to check on me. There was never any intent to create something for my readers, but she thought they were funny and brought my laptop so I could share them online. Here are the first three:

Hatched today. A nice man was waiting for me with harness and food. He wanted to be my friend. I said yes. Then I ated him.

Alternatively. I am a pretty gold dragon. I hatched today. Girl was waiting. Told her my name was Henth. Then I ated her.

I went to the barn. There were many animals. I ated them. Except the cat. I only tasted the cat. I did not ated it. Good cat.

I wrote maybe twenty or thirty over the time I was sick and figured that would be the end of it, but a funny thing happened: a lot of people loved them. When I didn’t post one for a bit, I would get asked about it. I picked up new fans who had never read any of my books. Pretty soon, people were asking when there was going to be a Dragon Diaries book. And, as I write this, I’m working with a fantastic illustrator and book development team on a series of illustrated Dragon Diaries books as an indie publishing project.

That’s the power of story. I’m an atheist, but I believe in story down deep in my bones. It’s how we as human beings make sense of the world and I think it’s a fundamental drive and coping mechanism. We crave story. My friend and fellow author Elizabeth Bear has a pinned tweet on her wall that I think speaks to a part of that: “The world is an unfair place, and this is why we have fiction.”

We need story. We also need tradition, and sometimes those things intersect. Which brings me to Red Currant Jelly Day. Some twenty–five years ago, my wife, Laura, (then my girlfriend) and I wanted to throw a party. We could have just sent out invites saying: hey, party here, with date and time, but that didn’t seem like enough. We wanted to make an occasion of it and the timing was coincidental with the expiration date (April 18, 1987) of a jar of red currant jelly that I’d had in my fridge forever. There was an abbreviated story attached to where the jelly had come from, when my friend Chris had been house sitting for me, so I wrote that up and we attached it to the invites. Sadly, the original is lost, but the version below—from a later party—is pretty close.

It all started in 1989 when a young man went off to the Arizona Renaissance Festival and needed someone to see that his apartment didn’t explode and his cats stayed well–fed. Many adventures were had by the lad, but that is not what this story is about. This is about his or, should I say, my, refrigerator.

Since I lived a hundred yards from both my parents and my grandmother, I’d never seen much point in using the kitchen of my apartment for anything other than storage. The oven was a convenient place to put cat food, as the cats couldn’t open it, and it kept it out of my way. The cabinets were largely filled with strange artifacts—later identified as dishes by my wife–to–be—supplied by my family when I moved out. The refrigerator was a mystical place into which I would occasionally stuff a twelve pack, or a candle that had been melting in the sun.

None of this was really front–brain knowledge however, and when I went off to live in a tent in the middle of the desert I didn’t give so much as a passing thought to the functioning of my kitchen. However, for my house–sitter, Chris, the kitchen was a vitally important place, necessary to his survival.

One of the first things Chris did after I left for parts south was go to a grocery store and stock up on food, which he brought home and proceeded to put away. This turned out to be an adventure in itself, beginning when he opened the crisper. At some point in the distant past, I had been given a dragon candle. Slightly after that, it ended up in direct sunlight, softened, and folded in half. That was when I stuffed it into the crisper. Of course, it was already too late at that point, and all that I managed to do was create a multi–colored blob of wax, heavy on the purples and greens, and with a very odd topology.

Chris—still foolishly possessed of the idea that if it was in the fridge, it had probably at one time been food—was deeply disturbed by this discovery. But after a while, he worked up his nerve, prodded the alien life form with a fork, and discovered it was harmless. However, this experience made him very cautious when he approached the rest of the contents of the fridge, which turned out to consist of one never–opened jar of red currant jelly which had expired some two years before his arrival.

When I finally returned from my wanderjar, Chris naturally enough wanted to share the tale of his adventures in my apartment, and to question me about the candle (now tucked away in a box in a cabinet—but still unidentified) and the jelly. After some careful inspection of the items in question and dusting off of old memories, I was able to identify the candle. But the jelly defied my powers of memory.

Or, at least, that is one explanation. However, since I have never in my entire life eaten red currant jelly, nor to my knowledge has it ever been a staple in my family’s household, I have darker suspicions. I tend to believe that it condensed out of the mysterious cosmic stuff of missing hangers and lost socks, and that it happened some time between when I left the house on my trip and when Chris arrived a day later—and that it is possessed of inhuman and sinister motivations.

And so, I have never opened it or discarded it—for fear that someone else might open it. Instead, once a year—near the expiration date listed on the jar—we bring it out and throw a festival to appease it.

That time has come again.

The response to this little story was like nothing I could have possibly expected. People LOVED the idea of the jelly as alien and possibly chthonic being and really wanted to be a part of the story. Several people brought offerings of weird food or little gifts for the jelly and we set it up on a counter surrounded by offerings. Sadly, we didn’t hang on to those first offerings, because, well, we didn’t expect to make a thing of it. But then, the next spring rolled around and we thought, Why not have another Red Currant Jelly Day party?

More offerings, a cloth for the counter, more bits added to the Jelly’s legend. Without thinking about it we had started a tradition with an attached myth, and it slowly accreted more traditions. The years rolled past. Our friends Steph and Ben made it a small wooden shrine with LED lighting and bead curtains.

The offerings became more elaborate and the party grew. Literary luminary friends added their bits. Like the year that Scott Lynch and Elizabeth Bear printed a randomly generated Cthulhu mythos paragraph as an offering, and Scott declaimed it for the party. Our friends are mostly geeks, writers, editors, academics—my wife is a physics professor—IT people, etc. They’re smart and engaged and they like to create, so it continues to grow well beyond whatever Laura and I might have made of it on our own.

We have a special box now for the offerings and all of the other accoutrements of Red Currant Jelly Day. At the most recent party, Sara, who has a Masters in Theology, was making noises about writing a creed for the Jelly, and suggesting I get ordained to perform marriages so she could add sacraments.

The Jelly has an origin myth. It has a holy day. It gets offerings and has its own shrine. It is stored in a special place between celebrations—the crisper, in a container labeled DO NOT OPEN, DO NOT THROW AWAY. It has grown into something that I no longer control or fully understand, and that’s all a result of the power of story. If I hadn’t written that first mythologized account for the Jelly, I don’t think any of what followed would have happened. I don’t know where it’s going or what it will ultimately become, but the Jelly and its story have become an example of the process of narrative moving beyond the imagination of the author.

Who knows? It’s already survived well beyond its own expiration date, perhaps it will outlast mine. 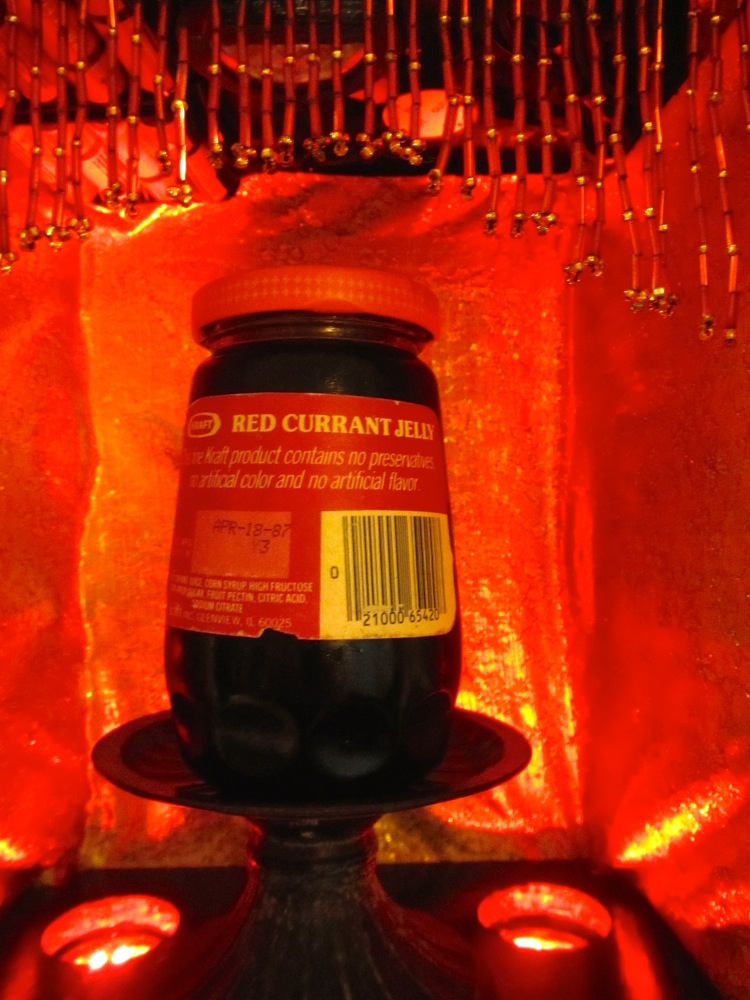 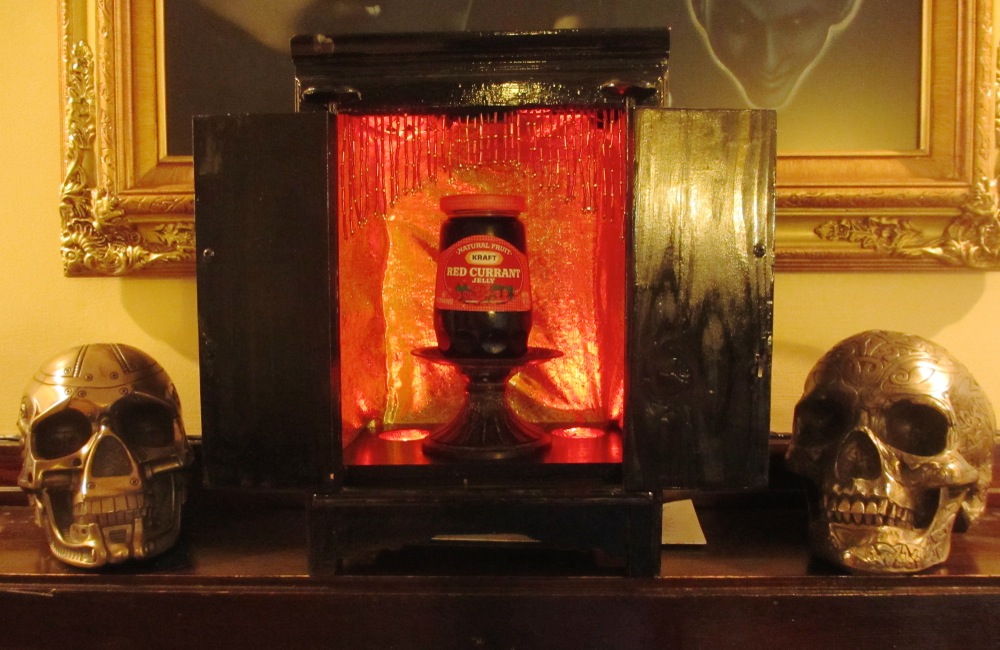 Kelly McCullough writes fantasy, science fiction, and books for younger readers. His novels include two series, WebMage and Fallen Blade, as well as School for Sidekicks; Magic, Madness, & Mischief, and the forthcoming Spirits, Spells, & Snark. His short fiction has appeared in numerous magazines and anthologies. His microfiction series DragonDiaries and Badnoir can be found on his webpage or by following him on Twitter or Facebook. He has been known to dabble in science fiction as science education, having written short fiction for the National Science Foundation and co-created a science comic for NASA and the Hubble Space Telescope. He also does a fair bit of silly performance art which can be found at: kellymccullough.com/shenanigans. He lives in Wisconsin with his physics professor wife and a small herd of cats. In those rare moments when he is not writing fiction, he serves as an elected county board supervisor, an office he has held for eight years.