Nails in My Feet

I gotta tell you, as a puppet life sucks. I mean, cartoon characters got it easy. They don’t have to deal with five-fingered monsters crawling all over them or being nailed to the floor. Or dying.

I was talking with old Scoobster the other day. Once you get past the doggy speak, he’s pretty clear. He says the studios cut sweet package deals for cartoons. They get television shows, feature films…

I know, I know; I’ve had my day. I made the majors and got my feature film, ruling the valley time forgot. Only now I’m in the closet time forgot. Whoopee—I’m Closetsaurus Rex, tyrant of the closet.

My big feature was a one-time gig, not like a cartoon character with spin-offs and trading cards and lunch boxes.

As if cartoons didn’t already have immortality staring at them with all those animation cels, thousands of them to hold their lives together. Some of those guys wind up in museums even. Talk about immortality.

Then there’s guys like me. After filming ended? They stuck me on a shelf. Which, I gotta admit, is better than some folks I know who went straight into the garbage.

You should’ve seen me, ripping into the other dinosaurs and dominating the frame while our handlers blurred all around us. I remember the light heating up my skin all the way down to the metal bones inside me. And I was good. I could move one tiny frame at a time and hold that pose. I was the Tyrant King.

Man, what I wouldn’t give to have one more day on stage, but that would kill me faster than anything. Why? They built me out of foam latex! Do you know what the life span on foam is? Five years, if you’re lucky.

I’ve been sitting here for over fifty years. I mean… my foam oxidized years ago. It doesn’t show, and I’m trying to keep it together, but one of these days someone’s going to try to lift me off the shelf and their hands will punch right through to the armature inside me. I’ll crumble to dust before they even finish moving.

Gives me the willies. Scares me. You know the saying, “They broke the mold when they made him.” Yeah. I can’t just get a new body and be ready to go on. I don’t have another cel of animation waiting to take over. If I’m moved, that’s it. Show’s over.

If I were a cartoon character—heck, if I were a real dinosaur, they’d put my armature in a museum. But not me. Not a puppet. There’s no immortality in my future. 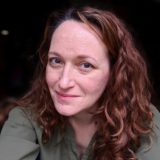 Mary Robinette Kowal is the author of the Lady Astronaut series and historical fantasy novels: The Glamourist Histories series and Ghost Talkers. She’s the President of SFWA, a member of the award-winning podcast Writing Excuses and has received the Astounding Award for Best New Writer, four Hugo awards, the RT Reviews award for Best Fantasy Novel, the Nebula, and Locus awards. Stories have appeared in Strange Horizons, Asimov’s, several Year’s Best anthologies and her collections Word Puppets and Scenting the Dark and Other Stories.

Her novel Calculating Stars is one of only eighteen novels to win the Hugo, Nebula and Locus awards in a single year.

As a professional puppeteer and voice actor (SAG/AFTRA), Mary Robinette has performed for LazyTown (CBS), the Center for Puppetry Arts, Jim Henson Pictures, and founded Other Hand Productions. Her designs have garnered two UNIMA-USA Citations of Excellence, the highest award an American puppeteer can achieve. She records fiction for authors such as Seanan McGuire, Cory Doctorow and John Scalzi.

Mary Robinette lives in Nashville with her husband Rob and over a dozen manual typewriters. Visit maryrobinettekowal.com.