“This visa is expired. Please step to the side.”

This could have been the opening to a spy thriller or a rollicking cyberpunk novel, full of chase scenes and neon lights. It certainly felt cyberpunk, being hustled back through the airport to a waiting taxi, surrounded by over-enthusiastic grifters and uncaring security guards. I cried in the cab on the way back to the apartment that was not in our name.

The year was 2016. My name was Jacqueline Bryk, and my boyfriend and I were being held under house arrest in Chengdu, Sichuan Province, China, for visa fraud.

Perhaps the most terrifying thing about the whole ordeal was that it wasn’t our fault. Our visas had been procured through a third party, who promised to handle everything. We were in China at the behest of my boyfriend’s employer, who wanted us to help set up an ESL tutoring business. The third party was supposed to be our local liaison. He abandoned us and went back to Guangzhou three weeks into the three months.

If I was a heroine in a fantasy novel, those threes would have meant something to me. We were on the 27th floor of our building. Three cubed. Three months in China. Three flights to catch there. Three hundred and twelve ESL instructional videos made. Three, three, three.

Phedre no Delaunay of Kushiel’s Dart might have found a universal cypher in those threes and made a key out of a hairpin to get herself out.

Tenar from The Earthsea Cycle would have seen it as an echo of her service to the nine Nameless Ones, and left that area as quickly as possible, resolving to never let them get a hold on her.

Hypatia Cade of The Ship Who Searched would have collected her things and flown herself and her partner out of imprisonment, without so much as a by-your-leave. Who would stop her?

I did none of these things. Instead, I floated along in my glass tower, and wept oceans while being shuttled in and out of holding cells, police stations, and government agencies for four days. It was 90 degrees the whole time, and the air smelled like vomit. My lungs were full of dust and tears. I am not a priestess or a changeling or an anguisette. I still have nightmares about that time, a year later. My therapist gave me a diagnosis of post-traumatic stress disorder, on top of my cyclic depression and overwhelming anxiety.

They were always there for me, though, these ladies and others of paper and ink. Even before China, I knew I could trust them. Tenar knew what I was going through, as a homeschooled Catholic child, constantly being pressured to represent an unstable family life with courtesy, dignity, and silence. She would not have told me what I was going through wasn’t “real abuse” just because her jailers were dark gods and not sneering parents. Phedre was there for me after both of my sexual assaults, reminding me that I was allowed to be terrified and hurt, but also have a healthy romantic life while in recovery. I was never kidnapped by a Viking overlord or the megalomaniacal god-king of darkness, but being violated by people I trusted was scarring just the same.

Hypatia lost her body to a debilitating illness, but became a cutting-edge interstellar spacecraft instead. She could have chosen to merely survive, but she thrived. Her disability changed her, but did not define her entire being. She was a brainship, but a brainship who liked to play chess and study artifacts and crush on her human partner, Alex. In the same way, I have a mental illness that knocks me out of “normal” human life in some ways—but that doesn’t mean I am no longer human.

I was scared once, but I am not dead.

Now I survive, but not alone.

“You’re safe,” they say. “We understand. We went through the same things and we survived. Now it’s your turn.” 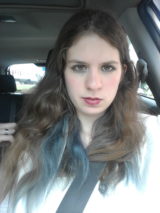 Jacqueline “Jax” Bryk is a freelance writer and game designer from Delaware. She is no stranger to sci-fi and fantasy fiction, though she mostly designs analog games. She was a featured guest at BreakoutCon 2017 and 2018 and won the Golden Cobra Award for game design in 2016. Jacqueline has written for White Wolf, Onyx Path Publishing, Helmgast AB, Galileo Games, Growling Door Games. and Damocles Thread Development. In her spare time, she likes to yell at games like Civilization V and Crusader Kings II, model for photographers and visual artists, avoid arguments about politics, and attempt recipes she saw on Iron Chef America once. You can find her work, both self-published and freelance, at http://drivethrurpg.com/browse.php?keywords=&author=Jacqueline+Bryk