I was born at the cusp of the dictatorship in Rosario, Argentina at the end of the seventies.

Fútbol has been in our blood since English sailors brought a soccer ball in their ships to the coasts of the Paraná and de la Plata rivers. In 1978, a few months after I was born, the country exploded in ecstasy as we celebrated the FIFA world championship. Our first. I was a baby on my father’s shoulders chanting victory with our fellow Rosarinians, while dissenters were being tortured in detention centers all over the country, including one a few blocks away from our home. The chants of gol! silenced the cries of the high school kids taken in the Night of the Pencils or other similar raids. Thirty thousand people disappeared during El Proceso, the Process of National Reorganization implemented by the Junta to return our country to a glorious past when people had flocked to Argentina, the Granary of the World. The Junta wanted to make Argentina great again by invoking the monsters those freedom seekers had left behind in their motherlands. And yet, the drive to fight against the monster of oppression was ingrained in our Argentine DNA.

Revolution simmered from the time our Native ancestors resisted against the conquistadores. Even when the Conquest of the Desert left them destitute, they weren’t vanquished. Stubbornly, they survived plagues, poverty, and abandonment.

Revolution roared in our blood when the first criollos fought against the Spanish and the English crowns to remain independent, and they won, declaring that the United Provinces of the Río Plata were free.

Later, our people rose against the monster of the dictatorship with its overreaching hands that disrespected even expectant mothers and robbed them of their children. Children born of love between parents who wanted to fight for freedom. Children conceived in violence in detention centers. The monster swooped down and carried the babies in its wings of anonymity and forgetfulness.

But mothers never forget their babies. They, and when they were dead, the babies’ grandmothers, waited in a plaza, white handkerchiefs wrapped around their heads. They waited years that turned into decades. The monster had stripped these children, born at the same time I was, even of their identity, the greatest crime against a person. Because the monster wants us to forget who we are; it wants us to believe we’re insignificant and unimportant.

Resisting the monster sometimes proved to be too much, and our people learned to look the other way and pretend the cries of their brothers and sisters were the roaring of the Pampero and the Zonda winds.

Every Argentine family has a story of a green Ford Falcon stopping at the neighbors’ house, or of a whole high school class swept away in a raid.

When I was a child, my questions of “Why were they taken?” were invariably answered with “They must have done something” or “They had it coming.”

My questions of “What did you do?” were answered with “Nothing. No te metás. The less you get involved in the neighbors’ problems, the better off you’ll be.”

This advice applied when a young man was stopped and frisked and taken away for not carrying documents, or the next-door woman was beaten up by her police officer husband every night. He was untouchable, and it was better to ignore her cries too.

But at the same time I was told to look away, I grew up with the slogan Nunca Más, born of the eponymous report compiled by the National Commission on the Disappearance of Persons led by writer Ernesto Sábato.

Learning how to live in democracy was difficult. Everyone wanted to be a hero, but it was more important to stay alive.

My parents were honest people. Hard-working. They were teenagers during El Proceso, and they grew up with a simmering anger and desire to speak up, and also with the overwhelming need to protect their family.

My orphaned mom had bounced from house to house to religious boarding school until she turned seventeen and was left on her own when the country was in turmoil. My dad lived with an alcoholic father and dropped out of school to feed his little brother. My parents didn’t finish high school, but they loved books and stories. And they loved me. Against the odds, they stayed together until death suddenly took my mom when she was in her early fifties. They had a difficult but beautiful life together—a revolutionary act in itself.

In our society, there were two ways out of poverty: becoming a fútbol sensation or getting an education. My parents tried to give me the best education they could afford. My father was a taxi or bus driver throughout his twenties and thirties. My mom cleaned houses and watched children from early morning until late at night. The oldest of four, I was responsible for keeping our house, cooking, doing the laundry, and taking care of my siblings, and never ever letting my chores keep me away from my studies. A degree was my ticket away from the monster of oppression that once a decade reared its ugly head and threatened to be reborn under a different disguise. Starting in 1983, we lived in a democracy, but democracy was slow in trickling down to us, the lowest class, the working people.

At school, in the early 80s, children still learned how to read from outdated and propagandistic primers that featured fragments of novels and short stories without any attribution to authors. In fifth grade, I read a snippet of a story about a boy who throws rocks at a train engine every day, until the train engine, fed up with the abuse, hurls back her whistle. The boy loses his voice and—

I didn’t learn the end of that story, or its title or author for almost thirty years, when I set out to look for its conclusion. In the security of my home, I read Mauricio y Su Silbido, by Laura Devetach, an author from the province of Santa Fe (like me!), the daughter of a Slavic immigrant father. Her work was banned by the military junta to the point that no one would publish her stories. The courageous labor of teachers ensured that her words wouldn’t be silenced and forgotten. Although I didn’t know Devetach’s name as a child, I remembered her other stories about a tree that flowers and produces notebooks for the poor children of the barrio, about a tower of blocks that opens to other worlds, of an angry boy who must learn to deal with the consequences of his actions.

Laura Devetach and other authors fought the monster with their words. Teachers resisted by spreading the seeds of free thinking contained in those words.

The revolutionary blood simmered inside me and sang its primal song, but I didn’t want to fight like Che Guevara or the Montoneros of the Dirty War. My role models were wordsmith warriors like Laura Devetach and María Elena Walsh, authors who waged war by giving voice to the most powerless members of society: children.

I left my beloved country a hot autumn morning in late March of 1997. I was nineteen years old. I’d never flown before. I’d never traveled more than a few hours away from my riverine city. When I arrived in Utah, I was drunk with possibility. When I stepped inside the glorious library at Brigham Young University, I was delirious with joy. The first book I read was the uncensored version of Little Women and cried for the first time over Beth’s death. My copy of the book back home ended with Meg’s wedding.

In my gluttony, I devoured books about Che Guevara, the history of my country, the dictatorships and the revolutions that drove my great-grandparents to Argentina from Yugoslavia, Spain, Syria, and Ireland. They had all known the monster too.

Every generation had to fight to earn freedom.

Freedom is fragile. It withers if we don’t tend to it. Every day.

In gatherings, after we danced our salsa and reggaeton, my friends and I exchanged stories of the monsters from our countries. It had different names in Chile, Haiti, the Dominican Republic, Bosnia, and Nigeria, but it looked the same everywhere. It arrived with false promises of security, lies of making a country great again, of going back to the roots.

In the years that followed, I discovered that the monster of oppression I’d left at the end of the world had followed me. It sprouted again and reared its ugly head, even in the happy valley where I live in the land of the free and the home of the brave.

I saw it in the way stories that featured my culture were reserved for reading during one special month of heritage and put away the rest of the year.

I saw it in the police officer who asked me for my papers when he came to my house to fill out a report after my daughter was bitten by the neighbor dog.

I saw it in the fear of my dear friend living in the darkened limbo between migratory status as he waited for a green card.

I feel the monster’s fetid breath even now as I type these words and all over the country immigration raids are breaking families apart and planting fear and terror.

But Nunca Más will I look the other way or remain silent. Like the mentors of my childhood, I wield a literary scythe that cuts down the vines that tie us and choke us, and I spread word-seeds to the winds. Seeds of free thought and the knowledge that we all have a voice no monster can ever silence.

Seeds take a while to germinate, but with care, they always do. When my ten-year-old daughter asks about why our neighbors were taken away, I tell her the truth. When she asks what I’m doing about it, I take her to town hall meetings, and women’s marches; I read her stories. And then, she wields her pen and writes an essay for her fourth-grade teacher, listening to the primal song of resistance of those before her, reverberating in her soul. She writes about immigrants’ rights, and her immigrant family, and the worth of each soul.

I know that the monster may re-awaken every few years, all over the world, but Nunca Más will I be silent and look the other way and pretend the pain and injustice around me are none of my business. This time I’m ready. 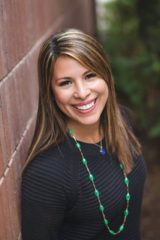 Yamile (pronounced sha-MEE-lay) Saied Méndez is an immigrant writer and reader, a dreamer and fighter, a Vermont College of Fine Arts MFA graduate, a 2014 New Visions Award Honor Winner, and one of the 2015 Walter Dean Myers Inaugural Grant recipients. Born and raised in Rosario, Argentina (cradle of fútbol), she now lives in Alpine, Utah, with her husband, five children, and three dogs, but her heart is with her family scattered all over the world. Find her on Twitter: @YamileSMendez and online: yamilesmendez.com.