Once We Were Prophets

Epilepsy used to be called the sacred disease because it enraptures people, taking control of them and sometimes bestowing visions that can be heavenly or hellish. It was the realm of oracles and wise men. When the seizures overtook people, they were touched by the Gods themselves. But over time, people began to fear it. It became a sign of witchcraft and demonic possession, and during the Inquisition epileptics were burnt at the stake.

Most of this is rooted in a lack of awareness. Movies and television get it wrong more often than they get it right. Ignorance causes shame and doubt, and makes it harder for people to relate to those with epilepsy, even with friends and family.

Getting my diagnosis as an adult was difficult. I was able to find comfort in the stories of my youth where people were not limited by their disability, and were fully active and respected members of their communities. Geordi LaForge from Star Trek, whose assistive technology and comprehensive knowledge was an asset to those around him. Tyrion Lannister, who embraced his atypical body, and was stronger for having embraced it.

When I first started having seizures, I didn’t know what they were. It wasn’t like in TV or the movies—no falling down, convulsions, or foaming at the mouth. It’s hard to find people like me in media. I’ve never really known anyone I could relate to in fiction.

Epilepsy is different from person to person. Sometimes it’s just an unstoppable jerking of the limbs that goes away for a few minutes. Sometimes it’s the inability to use language correctly. Sometimes you get trapped in your body, and lose the ability to move or interact with anyone. For some people, it brings hallucinations and visions, which can be rapturous or torturous depending on the content.

Professor X’s seizures in the movie Logan are a good representation of what it feels like for me.  It captures the inability to do anything but just ride the seizure until it fades. It freezes your world. For the first time in my life I had something I could point to and say “This is what it feels like! This is me!”

Talking about my epilepsy is a source of tension in my family. It is simply Not Spoken Of. It wasn’t until more than a decade after my diagnosis that I learned that I wasn’t the only one in my family with epilepsy.

My great-grandmother was humiliated by her epilepsy. At the time, few in Puerto Rico understood what triggered epilepsy, much less how to respond to someone in the throes of a seizure. It was considered shameful, something not discussed in front of children. My mother and her siblings never understood the source of my great-grandmother’s ataques until they were well past childhood. She believed her seizures were the will of God, and by taking her medication she was avoiding God’s will.

After her first seizure, my great-grandmother gave up cigars and dived deeply into evangelical Christianity. For her, it was an escape, a form of control. For her, prayer and her deep devotion to God gave her release from epilepsy’s trap.

Science fiction is my release. It’s helped me through periods of abuse, homelessness, and my diagnosis. The people in those stories found ways to rise above their problems. Playing tabletop games gave me a sense of control. As a player, I controlled my own actions. As a storyteller, I controlled the story myself. It helped me to understand that sometimes, situations come up that we can’t avoid, but we always have choices in how to handle them.

Epilepsy is a thief of a disease. It robs you of your time, energy, and control. You are not yourself when you’re having a seizure. My great-grandmother fell into convulsions and lost her sense of self, a condition that sometimes would last a whole day. Epilepsy traps me in my own body.  I see, hear, and think at my normal speed, but my body slips from my control. It limited my horizons, robbed me of opportunities and stole my dreams. For a while I thought I was dying. I had no control, and no answers. I spent time coming to terms with the idea that my life could already be over and there was nothing to do.

But after I was able to understand the limitations of my epilepsy, I was able to do so much more. I took up ballet, I had a painting headline a gallery show, and I travelled to Europe. It was while I was travelling that I met the man I would marry and start a family with.

I found a renewed sense of purpose once I had come to terms with those limitations, I found I had more options than I had believed before my diagnosis. I put aside my life of fear and embraced the opportunities that came my way.

Once we were prophets. Maybe we can be again. 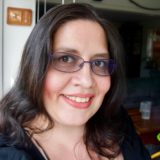 Leigh Schmidt is living her happily ever after with her daring hero in a seaside village in Denmark. She has a daughter and a way with animals and many stories she whispers to herself at night before she goes to sleep. She has been (in no particular order): a painter, a public speaker, a dancer, a cubicle drone, and a storyteller. She gave up on a life of chasing goalposts for a grand adventure and hasn’t looked back since. She lives in a state of perpetual motion, with a song close at hand to keep rhythm. You can find her on Twitter as @skriftleigh, or looking for a little peace and quiet as the monster under the bed.