This is the original timeline. You know, the one all of us came from. So we can’t do anything to it, or we won’t be born to invent time travel. We can only meddle with other timelines.

This is the original timeline. We’re trying to fix things. Unfortunately for you, if we ever do manage to fix them, you’ll probably vanish into oblivion, never having even been born. We have theologians in our future trying to decide, in that case, what happens to your soul; some of them think you’ll still be born, as a different person and in a different body, to live and die in that other reality. It’s controversial. Most people think you just won’t ever exist.

We’ve been trying to fix things but somehow we keep making them worse. We’re wondering if we should stop interfering. Maybe after this try.

We used to try to fix things, but somehow we always ended up causing what we were trying to prevent. The story of how we caused the sinking of the Titanic is hilarious. At least as long as you didn’t know anyone on the Titanic. Remind me what year it is right now?

There’s a plan. There’s a good plan. It might not be quite so good from your personal perspective, but we’re very confident in the plan as a whole.

There’s no plan. Sorry. We’re winging it. Can I have a sandwich, while you’re up? I didn’t pack a lunch.

You are correct, I am a time traveler! Unfortunately, I can’t actually change anything, at least not anything that matters. The time stream protects itself too carefully. I’m just here to interview people, you know, to get a folks-on-the-street sense of what things looked like… before. Oh, I can’t tell you before what. But can I interview you? Please? History will thank you.

The whole concept of a Darkest Timeline is inherently subjective. I’ve always thought the one where light can barely get through the ash in the air is the darkest timeline because I like being literal about these things. Oh, that had nothing to do with the Clean Air Act—I mean, there’s a timeline where it didn’t get passed, but the one I’m thinking of is post-nuclear. I mean, I guess you can also argue that it’s figuratively the darkest timeline as well. No one can really contest it on literal grounds, though, and figuratively there are some other contenders.

We tried to fix the rise of the Excoriat in 2050 and in trying to address the root causes of that, we accidentally caused World War I. Then we tried to undo the damage and instead we accidentally made the rise of Hitler possible. Then we had to come back and try to undo the nuclear catastrophes but we were sort of flying by the seat of our pants and we’ve decided not to add up all the additional deaths we caused but at least you made it out of the Cold War without anyone nuking anyone else. You may not like what you’ve got at this point but we have learned our lesson and aren’t making any more alterations to the time stream. We’re pretty sure it was worth it, though. They wore the skins of their enemies. Quilts were involved. You probably don’t want any more details.

We’re pretty sure JFK was shot by a time traveler, but we’re not sure why.

Do you have any idea how many joules of energy it takes to travel through time—yeah, we’ve got that movie, too. It’s a lot, okay? A whole lot. We don’t send very many people back here.

Look. Through extensive research and effort and conscientious work, we gave you a shot at defeating fascism by handing you a fascist who can’t even go down stairs competently. He can barely tie his own shoes. His organization leaks like a sieve. Quit your whining and take this chance. It is the best one we could offer you.

What is it you think you need from the future to get you to act now? Reassurance that your actions will matter? Really? Because I can’t actually give you that. I’ve never heard of you. Your name isn’t in any of the history books. If you need to know you matter, don’t ask history, ask the people you matter to.

You need my reassurance that your actions won’t matter? Really? Good lord. Where I come from, your name is a household word. You’re known to third graders. We named a doctrine after you. A strategy. A groundbreaking scientific theory. A potent form of humiliation. An execution method. A literary prize. You’ll never be forgotten. Ever. The only question is what you’re going to be remembered for.

Time travel to the past isn’t actually possible. I mean, obviously it used to be possible, but now it isn’t, so I’m stuck. It’s hard to explain. Something something quantum something. Do you have legal alcohol in this timeline, because I would really love a drink right now.

So the way we solved the butterfly problem is that we only go to timelines that are dead-ending soon anyway. Any questions you want answered? There’s nothing I can’t tell you, it won’t matter.

So the way we solved the grandfather paradox is that we realized that we can create new timelines, but we always go back to our own in the end. So I’m here to see if what my colleague did yesterday has worked yet. If I’m right, things will be a lot better for you! If I’m wrong, well, look, we’re doing our best.

We find the Mandela Effect weird, too. Because that movie people say they remember with the Genie never existed, and the Berenstain Bears were spelled the same in every timeline, but we totally did save Nelson Mandela. He was going to die in prison from an illness but we treated him. We did a good job of it, too, didn’t he live to be almost a hundred in the end? Anyway, no one should remember the version of history where he died. We’re not sure if some people actually do, or if it’s like that movie, people are just wrong a lot and sometimes they’re wrong in extensive detail.

We tried shooting Hitler, Stalin, Pinochet, Pol Pot, Queen Victoria, Andrew Jackson. We tried saving JFK, Archduke Ferdinand, Indira Gandhi, Martin Luther King Jr., Ken Saro-Wiwa, Leon Trotsky, Yitzhak Rabin, Sitting Bull. We tried warning airport security on September 11th, 2001, to confiscate all box cutters. We tried warning Indonesia and Thailand and all the rest about the 2004 tsunami. Well, obviously we didn’t make any of those changes in your timeline. But anyway, you’d be amazed at how many despots you can kill in infancy only to find out twenty years later that someone’s taken his place.

We have advanced mathematical models regarding exactly what changes will do to the timeline, and we’ve worked backwards to determine exactly what needs to happen. I know you don’t see your own purpose—that’s not at all surprising, at this point—but the models have determined conclusively that you have to be killed. It’s for the good of the world, and history thanks you.

There is tremendous debate where I come from about meddling with the past. Obviously there is tremendous scope for improvement—extinctions, the Library of Alexandria—but from where we stand, everything turned out okay. Humanity is thriving. So we’re hesitant to make any tweaks because you just never know.

We are physically unable to make changes to the past. We thought it might be possible to offer advice, but it turns out that when we attempt to offer any specific advice our voices become inaudible. Anyway, I’m here, and I’ve come to you, but I can’t tell you anything specific about the future, I can’t tell you anything specific about actions that might help. Here’s what I’m going to tell you: don’t lose hope, don’t give up, your actions matter. Did you hear that? Hello?

I’m from the future and I’ve come to visit the past because I always loved the ‘teens and ‘twenties, the golden era. The music, the fashion, the arts… Who? Oh, I never paid much attention to the politics of the period. I just liked the dance crazes. I’d ask you if you liked my favorite artist, but you won’t have heard of them yet!

In my era we’ve cured cancer, AIDS, Alzheimer’s, and diabetes. Shame we didn’t cure everything in time to save you… oh, wait, I’m sorry, I had you confused with someone else. I have no idea what you die of.

People have funny ideas about time travelers. I mean, yes, we know the future. But we don’t have some sort of magical insight into the what-ifs. Like, what if someone had saved JFK from being shot? Would he have gotten us out of the Vietnam War sooner, or would he have started a nuclear war with the Soviet Union? We don’t know that any more than you do.

What exactly is it that you think time travelers should be doing? You’re here. Why aren’t you doing it?

(Editors’ Note: “Paradox” is read by Erika Ensign and Naomi Kritzer is interviewed by Julia Rios on the Uncanny Magazine Podcast Episode 16A.) 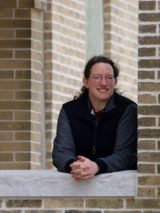