Pipecleaner Sculptures and Other Necessary Work

Ninah stood at the door, watching the kids head off to their parents in other parts of the ship. When the last one had vanished, she wheeled back into the classroom, ready for the bittersweet weekly ritual of taking down the art projects.

The preschool classroom was small, carved out of a storage room on the generation spaceship. Grey walls, cool lights. But she had made it a home over the years. A scrap of fabric here, some colored tinsel there.

But mostly the decorations were from the children.

Every Firstday they started from scratch; by every Fifthday the walls were transformed.

Ninah extended her metal arm, took the first batch of pictures down from the wall. Sammy had covered a yellow sheet with random purple shapes. Eliza had glued red to green.

Into the recycling bin.

There was so little on this ship, and everything counted. Yet she had pleaded for the children to have this work to do. Everyone needed work. Humans, children—androids.

The shelf by the wall was decorated with pipecleaner sculptures, strung with beads. Someone on the ship had had a packet of them once, and now she had them. How many years had it been? The wires were mostly bare of fluff, but they still bent.

Ninah took the sculptures back to her desk, took the beads off one by one, dropping them in the bead bucket. Straightened out the wire that had been twisted by dozens of tiny hands. The top joint was loose on her index finger. She was going to have to get that repaired.

She did not immediately recognize the man at the door. Ninah rarely ventured beyond the classroom. “Yes?”

He whistled. “Quite the setup you’ve amassed here.”

“Doing what I’ve been assigned, sir.” She could feel her hackles rise, or what passed for hackles on a silver 9-AH standard model android. She scanned the public directory on the ship’s database. Sub-Commander, Military Task Force, Landfall Division.

Ninah went back to her pipecleaners.

He didn’t like being ignored, she could tell. He prodded, “You know we’re landing in three months.”

“And there won’t be much call for preschool.”

“There will still be children, sir.”

If he had been Sammy he would have rolled his eyes. Being a Sub-Commander, he merely blinked. “Your classroom has held the children born during the journey,” he reminded her. “They’ll begin waking everyone up soon. The real childcare workers will need work to do. Can’t have idle hands.”

He blinked again. “I’m in charge of weaponizing anything that can be weaponized,” he said. “You Ninah types have some very useful features. Exceptional in combat.”

“And you expect violence, or…?”

“There’s always violence,” he assured her. “Some people are just bad apples.” He picked up a pipecleaner. “I haven’t seen one of these in years…”

She stared at him.

“Well, then. Get your classroom packed up. I’ll be seeing you shortly.”

He paused, as if expecting her to say how grateful she was to be of service. When she did not, he finally left.

She stared at a hanging paper crane for a long time, until a small voice interrupted her thoughts.

“Miss Ninah?” It was Eliza. “I came back for my scoopsure. I was gonna show Mama.”

Ninah blinked back tears. Not strange that she could cry. All the 9-AH models carried a standard range of responses. You loaded software for what you needed. Server. Nursery worker. Soldier.

“Of course, darling. Let me find it.” Hands moved blindly among the pipecleaner sculptures, searching.

“It was green,” said Eliza. “With four pink beads ‘cause I’m four.”

“I think we may have to repair it,” said Ninah. She picked up the straightened green pipecleaner. So strange to think of the materials leaving the classroom. “Let me find you the right beads.”

Eliza seemed to sense that this was an unusual event, and therefore unusual things might be possible. “And I had the flower bead,” she claimed, “and the gold button…”

Ninah laughed ruefully at her little haggler. She felt around in the bead bucket. The finger joint, already loosened, caught on the edge of the bucket and popped off. Ninah brought the metal piece out with the handful of beads.

Ninah stared at the piece in her hand. It had unbent so many pipecleaners. Held pencils. Patted heads.

It wouldn’t change a thing if she mislaid it. They would make her a new fingertip out of another android’s part, someone who was being scrapped, perhaps. Reusing. Recycling.

Ninah twisted the silver part onto the pipecleaner, handed it to Eliza. “Remember me,” she said.

(Editors’ Note: “Pipecleaner Sculptures and Other Necessary Work” is read by Stephanie Malia Morris and Tina Connolly is interviewed by Shana DuBois on the Uncanny Magazine Podcast Episode 19B.) 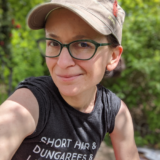