You press the barrel of the Aegis-IV Longslide into your partner’s hole, and he spreads for you like he’s purpose-built for this very moment. Your spinal reinforcements are made to handle recoil, but you can feel the tension of him juddering up your arm as you hold him still, keeping him there, keeping him under you.

“Hey, asshole,” he gasps into the mattress. “Is that thing loaded?”

The gun slides out of his ass with a soft squelch. You set it down and roll him over, wiping your hand on his body. He jerks with the aftershocks like you’ve overloaded him, eyelids fluttering open-shut, processing. His prosthetic fingers have torn large chunks out of the self-healing foam of the mattress, and it struggles to regenerate itself due to the lack of material.

You look at him sprawled out, still and silent, and lift your hand.

If he stirs, if he notices your raised hand, you will have to turn this into a slap, a rough prelude to the second round where you slam him against the wall and wrap your broad hands around his neck until he begs you to kill him or let him die.

His eyes remain closed. He does not get up.

His soft flesh feels strange against your calloused palm, and in the stillness of the room you keep your hand pressed gently against his cheek, listening to the one-two of his breath, a steady rhythm in and out, marking time.

You first meet him when you are about to be replaced. You are one of the few surviving R9-series supersoldiers, and your obsolete biological enhancements and nutritional requirements have made you a resource that is too expensive to maintain. Your handlers have told you that resisting will only accelerate the timeline of S1-series adoption, so you spend your final day-night cycles acquiescing to their tests, obediently letting them insert needles into your flesh for the full-body electromyograms. As you twitch your fingers trigger-fast for the measurement of nerve conduction speed, you hear the handlers murmuring about the cost efficiency of single unit elimination. They eventually come to the conclusion that mass disposal will be more efficient.

In the dimmed light of night-cycle, staring at the transparent walls and blank ceiling of the holding cell, you know that your retirement is inevitable. You close your eyes to see the familiar red-purple-black wash behind your eyelids, and breathe heavier breaths to hear something other than the hiss of the ventilation system.

A man knocks on the wall of your cell.

You look at the man (E4-series infiltrator, wiry, short, covered in blood). You look at the pistol in his hand (Aegis-IV Longslide, made for Q-series supersoldier and onwards, scopeless, requires arm reinforcements for ease of use).

You decode the colloquialism and nod. That is technically possible.

“Okay, fine.” He motions with the pistol. His grip is much too low. His dominant hand is swollen and bruised from kickback, indicating potential nerve damage without maintenance. “Step aside. This might take a couple shots.”

E4-series infiltrators are known for their expertise in hacking, not weaponry. There is no reason why one of them should be attempting to breach a holding cell, or even handling a weapon not built for infiltration purposes. Your duty as part of the R9 series is to inform your superiors of rogue units, or to engage in single unit elimination, depending on the situation.

He aims the pistol at the wall.

Both of you are waiting for an information broker in a location that calls itself the City Park. There’s an environment-wide holo shimmering above it, reskinning the body of water bright blue instead of dull brown. The holo is lagging in its camouflage—the grey pigeons flying over the water are trailed by overlapping afterimages of doves, and the branches of a swaying tree briefly turn to chrome wire before the motion-mapping catches up.

“There she is,” he says, vaguely gesturing at a figure in the distance wearing a pink synthcloth sheath dress. His dominant hand is still swollen from repeated use of the Longslide, and he winces as he moves his fingers.

You incline your head at him, and glance towards the broker.

“You’ll know if I need help. Have fun looking at trees and shit,” he says, before walking away. You gauge the distance you’ll need to close, and ready the Longslide, just in case.

After a brief conversation, the broker taps the steel-rimmed frames of her iKontakt unit, indicating information transfer. They shake hands upon completion of the transaction. You note the slight flinch as the broker grips your partner’s hand, and sorely regret his elimination of every scientist capable of maintenance.

“So, good news,” your partner says, sitting straight down on the park bench’s anti-sleep spikes. “Turns out we can get revenge on the fucks who made us and get paid for it.” He goes on about his plan to eliminate the parties responsible for creating and maintaining the facility—the funders, the backers, the scientists he has not killed yet—but all you need to know is where to go and who to shoot.

Most of this is irrelevant data to you, but not to him. You settle down next to him and let his words fill the air, tilting your head upward to watch the pigeons as they fly beyond the bounds of the holo, their pure white feathers turning back to grey.

You break the Longslide down after every mission. After cleaning each part methodically, you reassemble the pistol and perform a standard function check. It is important to maintain your equipment in order to avoid failure in combat.

The muscle damage in your partner’s dominant arm has reached a critical point after his encounter with an S1-series supersoldier. His typing speed has slowed, and his grip on the Longslide has been weaker than usual, making the pistol vulnerable to jams or cycle malfunctions. Your partner shows no signs of initiating maintenance on himself.

You haul him up, dig your fingers into the place where his neck meets shoulder, and press down hard. While there are several knives within reach, he refrains from stabbing you with any of them.

“Fuck,” he says through gritted teeth. “Fuck this, fuck you, fuck—”

You pick up your unused silencer and roll it across his forearm in one long firm motion, and he arches back against you and howls. You do not flinch.

You continue rolling the silencer along his arm, applying steady pressure in order to break up the developing scar tissue. While subjects are undergoing pain-inducing maintenance, it is standard facility procedure to verbally inform them of the flaws in their combat technique. You are acutely aware of your partner’s flaws: his insistence on using the Longslide, his propensity for excessive violence, and his determination to work alongside you despite being ill-suited to direct combat.

You set the silencer down to begin manual maintenance on your partner’s wrist. His constant stream of curses falters, replaced by ragged breaths. As you progress to his finger joints, he sags back against you, his head pressing against your chest as he begins to emit pained sobs.

You hold him steady as you continue the process, and avoid any use of words.

You are used to hooded sweatshirts, baggy jeans, clothing items that allow you to hide the bulk of the Longslide in their folds. You are not used to the tailored lines of the suit jacket and pants, the cuff holos on your shirt cycling through animation routines with every small motion, and the necessity of concealment forces you to take the small polymer pistol instead of the Longslide.

You know for a fact that your partner’s training included covert assassinations. There is no reason for the two of you to be at a bar named Sui Generis, wearing custom-tailored suits, waiting for an automaton to wheel itself over and read your tastebuds.

[For you, %NAMEOFPATRON%,] the automaton says to him, [I would recommend the Negroni. A mainstay of any cocktail menu, the Negroni is—]

“Yeah, whatever,” he says. “Save the explanation, gimme one. What would you recommend for this asshole right here?” He jabs his thumb at you, and the sudden movement lags his skin holo, his fingers gleaming silver before it catches up.

You open your mouth for the automaton to scan your tongue, and it whirrs for a while, considering.

[For you, %NAMEOFPATRON%, I would recommend the Fuzzy Navel. Made with equal parts orange juice and peach schnapps, the Fuzzy Navel is considered a fun drink for many an occasion, such as bachelorette parties and beach getaways!]

“He’ll have that,” your partner says. His authenticator chimes with the account deduction.

When the Fuzzy Navel arrives in a tall glass that’s so cold it’s frosted, you take a tentative sip of the orange liquid. Most liquor you’ve tasted since avoiding mass disposal has been a bitter shock, but this makes your teeth hurt with its sweetness, and somewhere during the process, your sips gradually become gulps.

Your partner watches you as you drink. The ice clinks as you set your glass down.

“Thought we should celebrate beforehand,” your partner says, gesturing at a man across the room. You wave your hand at the gun under your suit, then raise your index finger to indicate distance.

“Fine, fine, let’s go closer, let’s avoid collateral damage,” he says, getting up from his seat. “So sorry you can’t play with your favourite toy tonight. Hell, after all this is over, I’ll even let you fuck me with it.”

His tongue curls around the last few words, and you can tell he wants you to—has been wanting that ever since his prosthetic was installed, since he could finally fire the Longslide the way he wanted—so you nod, remaining silent.

“Last time,” he says, modulating his pitch in an attempt to be reassuring. “Last one on the list, I promise.”

The sweetness of the drink lingers in your mouth. You know this will not be the last time.

You shoot the man anyway.

You lie down on the bare mattress, pressing your forehead against your partner’s back, and despite being asleep he still shifts on the bed to accommodate your presence. You reach your hand around to where the prosthetic latches onto his stump, and ease it off in order to let the skin rest.

This is the man you consider your partner. You have staunched the flow of blood after he cut his own arm off, have seen him tear a man’s ear off with his teeth, have heard his soft snores fill up the room as you drift off to sleep. You gently place your arm around his waist, prepared to deny everything in the morning.

The Aegis-IV Longslide pistol lies beside you, spit-and-shit-sticky, gleaming in the half-light, unloaded. 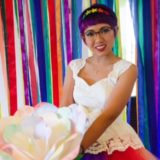 Vina Jie-Min Prasad is a Singaporean writer working against the world-machine. She has been a finalist for the Nebula, Hugo, Astounding, Sturgeon, and Locus Awards. Her short fiction has appeared in Clarkesworld, Uncanny Magazine, and Fireside Fiction, and you can find links to her work at vinaprasad.com.