The Politics of Comfort

Earlier this year, there was discussion about the Hugo Award ceremony and the need to keep politics out of the acceptance speeches. On the one hand, I can understand that. The last thing most of us want is a bunch of cranky authors getting on stage to sling mud and proclaim that their story stands for freedom, and everyone who voted for that other author WANTED THE FICTION TERRORISTS TO WIN!

It’s a refrain I’ve heard a lot: The need to keep politics out of science fiction and fantasy and to let people enjoy our stories for entertainment without having to drag politics into everything. We in the United States just got through midterm elections last month, and I can certainly understand the burnout on political ads and self–serving straw–man narratives. But despite what the campaign ads might suggest, politics isn’t just fearmongering and lies.

So many of our stories involve questions of power, whether that power is personal or supernatural or technological. Storytelling isn’t simply a matter of coming up with the next shiny idea. It’s looking at who benefits from that idea and who loses out. What struggles do you create with the introduction of magic or monsters or time travel or cloning? The moment J. K. Rowling began writing about witches and wizards, she also had to write about political conflict. How would the wizarding world be governed? Who gained from magic, and how? Those political power struggles are part of what made her series great.

Politics have always been an intrinsic part of our genre. They’re at the heart of science fiction and fantasy, and they’re an important piece of what make our stories work.

Frankenstein is often hailed as the first true science fiction novel, but where would that novel be without the political themes of power and alienation? Sylvia Bowerbank notes, “[t]he Creature confronts Victor with the twisted logic of mankind. He asks Victor why he should respect society’s laws which ‘would not call it murder’ to kill him because society classifies his life as an aberration.” Building a man out of spare parts is cool, but it’s the creature’s alienation and exile from the social order that makes Shelley’s novel a classic.

Look at our award–winners, our bestsellers, and you’ll find politics on every page. Lord of the Rings is an epic of war and the corruption that comes with power. It examines the cost of isolationism, the impact of war, the myth of the “true” king, and so on. Ender’s Game is built around the fear of the other, the importance of communication and empathy between cultures, and much more.

Sometimes the politics are obvious, such as the dystopian government of Suzanne Collins’s The Hunger Games, or the rugged individualism of Heinlein’s work. The sentiments in his quote, “An armed society is a polite society,” from Beyond This Horizon crop up in gun control debates to this day. Strip the politics from the stories, and you’re left with a hollow cocoon.

So what does it mean when we read yet another call for everyone to stop polluting and destroying the genre with politics? Most of the time, what these calls really seem to want is for politics to be invisible and unobtrusive. “Obtrusive” generally means one of three things:

In January of 2014, Alex Dally MacFarlane issued a call for the end to the default of binary gender in SF/F. Not the end of binary gender; merely a call to move beyond that unthinking default. This led to a number of arguments and discussions, with some authors proclaiming it was a mistake to put the message ahead of the story, and anyone following MacFarlane’s advice would end up writing politically preachy, second–rate fiction.

There’s no such thing as pure entertainment, and I say that as someone who wrote a story about a muppet–eating werewolf. What “entertainment without politics” means is “entertainment that regurgitates the norm and doesn’t challenge my assumptions in any way.”

Ours is the genre of “What if?” and “If this goes on…” In order to explore the possibilities of other worlds, we must acknowledge the realities of our own. In order to imagine the future, we must recognize the complexities of the present.

I understand the allure of comfort fiction, but how comforting can it truly be to read stories of a future in which your culture and people have disappeared from the universe? How entertaining is it to read yet another fantasy set in a meticulously researched analogue of our own history…with the exception of the total and inexplicable erasure of people like you?

When Ann Leckie chose to write about a protagonist from a genderless society in Ancillary Justice, that was a political choice. So was Jim Butcher’s choice to write Harry Dresden as a straight white male. Neither of those choices is automatically Right or Wrong, and I’ve enjoyed both authors’ work. But let’s not pretend one is a political statement while the other is “normal.”

In Ursula K. LeGuin’s acceptance speech at the National Book Awards, she talked about the need for “voices of writers who can see alternatives to how we live now and can see through our fear–stricken society and its obsessive technologies to other ways of being, and even imagine some real grounds for hope.”

Our genre is amazing. We imagine the futures of our species and the possibilities of other worlds, other forms of life, other realities. We’ve inspired scientists and artists and explorers. Story is powerful. It’s also political, whether we like it or not. It has been for as long as our genre has existed. That’s part of what makes the best of our genre and our stories so powerful, and so important. 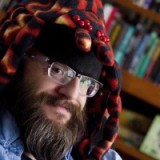 Jim C. Hines’s latest book is Revisionary, the fourth and final in his modern–day fantasy series about a magic–wielding librarian, a dryad, a secret society founded by Johannes Gutenberg, a flaming spider, and an enchanted convertible. He’s also the author of the Princess series of fairy tale retellings (in which Snow White is a witch, Cinderella has a glass sword, and Sleeping Beauty is a badass assassin) as well as the humorous Goblin Quest trilogy. His short fiction has appeared in more than 50 magazines and anthologies. Jim won the 2012 Hugo Award for Best Fan Writer.

He lives in Michigan with his wife and two children. You can find him online at www.jimchines.com.

3 Responses to “The Politics of Comfort”