Data is not an element that has ever been bloodless.

One has petals that are pale in vases and reflect moonlight

the other walks in empty spaces, and footprints glow behind it.

Marie Curie was poisoned by her blood.

She kept radium in her pocket

it bit her with bright teeth,

(I wonder if her hair fell out.

I don’t suppose it matters.

She did it to herself:

decay and dignity were isotopic together.

Marie’s shoes have flowers in them:

water buttercups, from one of the last days she spent with Pierre,

gathering flowers in the country.

Then he died in the street

the buttercups still fresh in their vase.

To keep them, Marie pressed the petals between books

but there they were hidden in covers, out of sight

and not nearly painful enough.

She pressed them in shoes instead,

her whole weight come down upon them, lightly

This is loss, she thinks: the feel of cellulose,

imbued with the slow, warm itch of laboratory,

the particles she transfers from element to flesh to funeral flowers.

(Her cookbook is kept in a lined box now.

It’s too radioactive to live outside of lead, so they say—

but when the covers open up, buttercups sprout from the round

radioactive prints of fingertips. The petals catch in the book’s spine

and fill the box with the scent of watery stems.)

The shoes she wrapped up and stuffed in the back of wardrobe,

because flowers following behind made her feel too much a sacrament.

There’s nothing sacred about grief. It’s revolting. A mess in the streets,

blood in the gutter, bones shifting uneasily and broken under skin.

He was run over, the husband who brought her buttercups,

run down in the street, and all she has of him are shoes stained with radium

(everything she touches becomes half a life, half alive)

and water flowers, wild flowers, that come alive in footprints.

(Editors’ Note: “Radioactivity” is read by Erika Ensign on the Uncanny Magazine Podcast, 41B.) 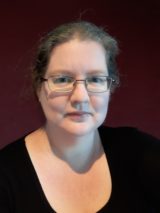 Octavia Cade is a New Zealand writer with a PhD in science communication. She’s sold close to 60 stories to various markets, and her most recent novella, The Impossible Resurrection of Grief, was released by Stelliform Press in May. A poetry collection, Mary Shelley Makes A Monster, was published by Aqueduct and nominated for a Bram Stoker award. She attended Clarion West 2016, and was the writer in residence at Massey University in 2020.