Wandering among the roses in my garden,
I found a child, only five inches tall,
under a Madam Hardy. She was standing
on mulch, leaning against one of the rose canes.
I bent down to look at her, and she looked back
fearlessly. She was lean and brown, dressed
in a dormouse skin, cleverly sewn together.
She raised one hand, and I saw that she was armed
with a long, sharp thorn. She was not threatening me,
just showing me that she was not defenseless.
She shook the cane, and rose petals fell down
around her like summer snow. What should I do?
She was a child, but clearly self–sufficient,
in no need of help from me. So I did nothing.

Every morning, when I went to check the roses
for blackspot or Japanese beetles, I would see her
or traces of her—aphids speared on a thorn,
a pile of raspberries pilfered from my garden.
I didn’t mind—she could take what she wanted.
Would it be wrong of me to leave her something?
And what would be useful to her? String, I thought.
Toothpicks, pieces of felt, a cut–up apple.
I would leave them under the blossoming Cuisse de Nymphe
or Cardinal Richelieu. They were always taken.
One morning I found a Japanese beetle spitted
on a toothpick, and the next morning I found two.
I think it was her way of thanking me.
She must have noticed what they do to roses,
how they eat the leaves and petals, chewing through them
until they are only a series of ragged holes
held together by a spiderweb of veins.

I did not see her again for a long time,
just tiny footsteps where I had raked the soil.
But one day I found her lying under the birdbath.
Immediately, I could tell there was something wrong;
she was pale, her breathing irregular, in quick gasps.
She lay with her arms wrapped around her torso, the way
you do when you’re trying to hold yourself together.
What should I have done? We are always told not to touch
the wild things: abandoned fawns aren’t really abandoned,
mother birds may return for fallen fledglings.
But she was a girl—a wild girl, but still human.

I put her in a shoebox lined with batting
and carried her up to the porch, which had a screen
to keep out insects, but was not indoors, exactly.
I brought her the sorts of things I thought she ate
in the wilderness of my garden: raspberries,
sliced peaches, lettuce, peas, asparagus sprouts,
even a frog I had to spear myself,
but I had seen her thorn, so I knew she hunted.
She ate it raw, all except the skin and bones.
Nothing seemed to help. Each day she would eat
less, sleep more. Slowly, she grew sicker,
coughing and feverish, with the typical symptoms
of a respiratory infection, something viral
that even her strong system couldn’t fight off.
One day, she stopped eating altogether.
She drank water from a thimble, that was all.

Next morning, I sat with her as she closed her eyes,
and then it was over, as quickly and peacefully
as a bird flies from its nest. I buried her
by the edge of the woods, under a stand of maples.
I put a stone there, gray with a vein of quartz.
Then winter came, and I was sick myself;
at my age, I don’t get over these things as easily
as I used to. Meanwhile, the garden lay dormant, snowbound.
I mostly stared at it from the kitchen window.

When spring came again, and all the snow was melted,
I walked around to survey what had been damaged.
The rose canes were dry and brown. I’d have to prune them
so new green shoots could spring from above the graft
to form flowering mid–summer arches. The vegetable garden
was covered with burlap. I peeled it back to see
what had survived underneath: mostly beets and turnips.
Almost as an afterthought, I walked to her grave.
In front of the stone was heaped a strange assortment:
acorns, a piece of faded ribbon, the cap
from a soda bottle, several sharpened sticks,
a bright blue plastic button. I started to sweep
it away as rubbish, then suddenly realized
that no, these were grave goods. As ancient tribes would honor
their dead by burying them with weapons, supplies
for the afterlife. Later that day, I brought
the thimble she had drunk from and left it there,
like a chalice on a church alter. Every morning
I’d go and leave something: berries, and when the roses
had started blooming again, the finest blossom
I could find that morning, fragrant, still covered with dew.

It was mid–summer before I started to see them,
the wild children, no larger than she had been,
dressed in skins, with weapons just like hers.
Now, when I’m in the garden deadheading the lilies
or cutting back the mint, sometimes I’ll see one,
sitting on the old stone wall, enjoying the sunshine,
never speaking, just being companionable.
Or one will be leaning on a tomato trellis,
arms crossed, watching the birds in the lilac bushes.
Sometimes I’ll leave out something they might find useful,
a ragged handkerchief, a knitting needle
that would make a fine spear. But I try not to interfere
in their lives—some things should be left as they are;
at my age I’ve learned that. I hope eventually,
when I’m buried by the edge of the woods myself,
which is what I’ve arranged for, they will come and visit,
leaving bits of ribbon, or buttons, or maybe a rose
every once in a while. It makes the thought of death
easier, somehow, that they would still be climbing
up the branches of the apple tree, or fishing
in the pond, or maybe dancing under the moon
if indeed they do that—I’ve never seen them,
just tiny tracks in the newly prepared bed
where I was planning to sow the radish seeds.

If they could visit me, just once or twice,
even if there’s nothing of me left
to know or care—I’d like that.

(Editors’ Note: “Rose Child” is read by Amal El–Mohtar on the Uncanny Magazine Podcast Episode 13A.) 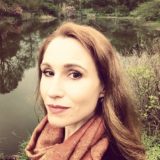 Theodora Goss is the World Fantasy, Locus, and Rhysling Award-winning author of the Extraordinary Adventures of the Athena Club novels, including The Strange Case of the Alchemist’s Daughter, European Travel for the Monstrous Gentlewoman, and The Sinister Mystery of the Mesmerizing Girl (forthcoming October 2019), as well as short story and poetry collections In the Forest of Forgetting, Songs for Ophelia, and Snow White Learns Witchcraft. She has been a finalist for the Nebula, Crawford, Seiun, and Mythopoeic Awards, as well as on the Tiptree Award Honor List. Her work has been translated into twelve languages. She teaches literature and writing at Boston University and in the Stonecoast MFA Program.

One Response to “Rose Child”