I was so taken with the theme of Ports in a Storm. Safe havens can come to us in so many ways: the home we live in, the relationships that nurture us, the moments we have with others as we laugh, listen, and talk about our heart’s desire. For some, there are friends or family to visit when the need to get away from a stressful life happens and their home/presence become the calm outside the storm.

But for too many people the idea of a safe haven is hard when they are treated as less by others just because they are different in the many ways that humans can be. Using the traditional differences of skin, religion, sexual preference, age… the list goes on. Danger comes from outside and inside.

Outside danger presents as weapons, thrown objects (beer bottles), looks of disgust/negativity that ask: why are you in my safe space (aka a restaurant/hotel, etc.).

Inside danger is the constant grinding down by society saying you are worthless. This results in suicide, loss of dreams, depression, anger, violence, and whole generations losing their sense of self.

As I traveled to Baltimore for the World Fantasy Convention, many friends wished me a safe trip in the way you do for someone traveling to a strange, unknown country that might be dangerous.

A fellow Black woman writer posted on social media the day I was at the airport traveling here that she was walking her dog when a beer bottle was thrown at her from a car, along with racial slurs. She went into a restaurant to wait after she called the police. The restaurant became a temporary safe space for her. The police escorted her and her dog home. She got a sense from the police that they were not happy with what happened to her, that the change of atmosphere in our country has created these incidents.

I think often how this country has become increasingly dangerous for humans who look/act different from the people who now feel it’s acceptable to behave in inhuman ways. This is not a new situation, but it has ramped up because there’s a sense of no shame in this country among some groups of people.

Where is the safe haven for the rest of us?

I’m a human walking in a country I sometimes don’t recognize anymore. My constant desire is for the evolution of all humans on this planet to realize that we’re each different, we’re each the same. We have joy, pain, desire, dreams.

Days where anger and disappointment spike I turn to writing—my safe haven. I can write my feelings and feel safe expressing anything in the solitude of my home. I take care to decide which of these words to offer to the world through the dark light of horror or the fantastic worlds of science fiction.

In the speculative community there is a safe haven. For what humans are in this community who can’t accept the same/differentness of others, they mostly keep to themselves—and that’s fine with me, they can leave the room when I enter. I know many voices in this community who have spoken up to reject putting down others because of their difference.

Each place I walk, whether safe or unknown, I enter to meet and treat others as equal humans and expect the same in return. In speculative communities I don’t have to be ready to defend my humanness as I do in the real world. I also know many people who would have my back if something dangerous came down—and well, you know—I’m from Philly, so I’m prepared!

I am also part of a tai chi community that gathers once a year in Sedona for a retreat. Another opportunity to relax into my human-ism, to feel safe.

I carry my own safe harbor as an energetic force field. When I’m around others that I don’t have to constantly be on guard against, life is more relaxing.

For those of us who are on guard, who have been hurt, until you are in your Safe Haven, as a human being on this planet, I apologize for the human race to you.

For those of you who can walk this country without fear, accepted because of how you look, I challenge you to be aware when others enter places they aren’t welcome. Take a moment and imagine what it would be like to be them. This moment can make a subtle change energetically and perhaps inspire you to step outside your comfort zone and do something to create change. 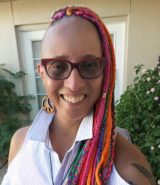 Linda D. Addison is the award-winning author of four collections, including How To Recognize A Demon Has Become Your Friend, and the first African-American recipient of the HWA Bram Stoker Award®. In 2018 she received the HWA Lifetime Achievement Award. She has published over 300 poems, stories and articles and is one of the editors of Sycorax’s Daughters (Cedar Grove Publishing), an anthology of horror fiction/poetry by African-American women. Catch her work in anthologies Dark Voices (Lycan Valley Press), and Cosmic Underground (Cedar Grove Publishing). Her site: lindaaddisonpoet.com.