One night on the mountain, you eat his death.

You don’t know what compels you to do it. It has been a trying day. Anyone might have committed the same thoughtless act of petty retaliation.

Whatever the reason, when Kyoseong turns his back on you, slender hands on narrow hips, you take his death between your teeth and bite down, hard. It cracks between your jaws like thunder condensed in a chestnut, and the echoes roll off the trees, across the face of the cliff. A dozing flock of magpies, scandalized, takes wing.

“What was that?” he asks, the jagged edges of your latest disagreement already softening.

And you, gluttonous, spiteful creature that you are, you swallow down his death in two gulps and say, “What?”

“That sound. That—” here his hands flutter to his stomach as though to cover an open wound, “—sensation.”

You cannot voice a lie, so you settle for a grunt that you hope he’ll take as a dismissal.

“Never mind. I’m tired.” He trudges down the hill a bit, still favoring his left leg. Falters, comes back. Ever loath to let anger fester. “Listen. What I said earlier, about your—”

“—concerns.” His eyes close, longer than a blink. “It was presumptuous of me to dismiss them out of hand.”

You draw in a slow, cautious breath, and there isn’t a whiff of falsehood riding the air between you. But then, there wasn’t earlier, either. What a luxury, this ability to utter two opposing statements with the same conviction, mere minutes apart.

He laughs, rueful. “I know, Geon.” The name they assigned you fits easily in his mouth, as though it were carved to fill the spaces between his tongue and teeth. You decide you might grow to like it, finally.

He glances over at that. Tension eases from his shoulders, and he rests his palm on your broad forehead, between your eyes, fingers briefly encircling the nub of bone that rises from your crown. You let him believe he understands what you’re apologizing for.

The sweet, sticky aftertaste of his death lingers on your tongue.

You don’t recall what drew you down from the mountains. The music, perhaps. The scent of seared meat and burnt honey. You would have done well enough for yourself had you kept away from their city—the occasional lightning strike during the dry season could sustain you for years—but something drew your paws along the hard-packed dirt of their queen’s road.

It surprised you, when they learned to craft lasting structures. Their lives are so short, here and gone again between dreamings, a blink before decomposition. You did not expect these fragile, spindly creatures to remain long enough to learn the land. But they did, spreading like a stain throughout the valley, adapting to the turns of the seasons. And they reworked the world to contain them better, more comfortably, clever hands rendering tools and shelter from earth and iron, wood and water. Even fire.

You are not the first of your kind to move amongst them; you are spared that awkward initial encounter, the screaming bewilderment, the impotent rattle of spear and sword against scale. By the time you first step through the tiered gateway, they have a process for you. A role. They direct you to the civil registry.

You never had a name before you came here. (What need has a current or a canyon or the chill breath of first frost for such a trifle?) They will have to assign you one from a lottery, later.

“I don’t suppose you have an address?” the clerk says glumly, the prospect of an incomplete record clouding her face. Her ink brush hovers hopefully over the page.

You swivel your eyes toward her, watch her quail. “What for?”

“So the disaster brigade knows where to find you.”

“When there’s a fire for you to put out.”

One day you will swallow the sun.

This is the promise held in the ripple of your muscles, the dull ache of your bones. You are small now, but you will grow until you dwarf the eldest pine, until lakes form in your paw prints, until no earthly conflagration can sate your hunger.

It is no secret. The hares speak of it idly among the tall grasses. The river gossips of it with the rain.

The people in the city would know it, too, if they ever endeavored to learn a language besides their own.

The evening after you are introduced, Kyoseong finds you in the hollow where you like to rest. (Each year, you move farther from the outskirts of the city. Your file is decades out of date.)

“I didn’t know,” he says, arms laden with rice cakes, persimmons, salted fish, “what else you eat.”

He is the fourth partner (handler) assigned to you, the others long dead or retired, but the first to bring wine and a bowl for you to lap from. He sits on the ground beside you, careful not to tread on your tail.

You nose through his offerings, accept a round fruit. Its skin is soft and splits easily beneath the gentle pressure of your claw. This close, you can hear his breath hitch.

He shrugs, pretends it never occurred to him. “What is that?” He taps his own forehead.

You bristle. “It will be, in time.” It is how you will hook the sun from the heavens, but you do not tell him this. He will only think that you are boasting, now.

Kyoseong examines a bamboo leaf, then discards it for another that looks identical to you. He pulls it taut across his lips to produce birdsong, the drone of cicadas. This kind of magic lies beyond your reach. His ears redden, but you can tell that he is delighted by your fascination.

Out of courtesy, Kyoseong shows you his box. His people are obsessed with them. They dwell in boxes, keep their little belongings in boxes. They travel in boxes and when they are done moving, their kinfolk store their bones in boxes mounded with earth. Kyoseong has no kin. He lives alone, cut off from the wind and stars, surrounded on all sides by boxes filled with strangers.

Dust coats some of the surfaces. “I find this dreadful,” you tell him.

He looks around at his things. “So do I.”

He teaches you to read. In the quiet hours between patrolling and drills, Kyoseong shows you the sweep and curl of your borrowed title and bids you scratch it again and again in the dirt.

It unnerves you to see it there, like a talisman. You scuff it out.

In turn, you tell him how to taste a lie. To catch a furtive glance, a flutter of the pulse. Some of these observations come more naturally than others, but he is a quick study, and eager to learn. You find that you enjoy teaching.

You wake yourself once, paws twitching. Still writing his name in the air.

“Why do you build so close together?” you ask Kyoseong, around a mouthful of flame. The charred remains of a teahouse sag as you suck down the last of the blaze from its blackened timbers. You savor the crackle at the back of your throat.

You arrived before the rest of the brigade, wending through alleys barely wide enough to admit your shoulders, but not before the fire caught the neighboring buildings, dancing across the rooftops.

Clay tiles slide from the eaves. They shatter at Kyoseong’s feet, and he jumps back, crowding close enough that his hip presses against your flank. The danger passes. He doesn’t move away.

“Perhaps we still remember huddling together in the cold and dark. It translates into our architecture.”

“Loneliness. Fear. The usual human foibles.” He smiles at you, gaze unwavering, though you know it pains him to meet your burning eyes. Smoke tangles in the weave of his ramie coat, the knot of his hair. You turn aside.

“It is stupidity,” you snarl, “to let a stray spark reduce your hard work to cinders.” Your tone is accusatory, as though he is responsible for all of his people’s shortsighted urban planning.

The others flinch from the gleam of your teeth in the darkness, but Kyoseong laughs. “Who doesn’t sow the seeds of their own destruction?”

You join in the search for survivors. Kyoseong picks his way across the scorched floor alongside you, sure-footed as a goat. Later, the relief team will line the street with the dead.

He braces against you for balance and cocks his head, startled. “Did you get taller?”

Because you are his partner, you notice when Kyoseong takes his death out and inspects it in the soft light before daybreak. He turns it over and over, gazing into it with that wistful turn of his mouth you’ve learned to recognize.

It strikes you as wasteful, this preoccupation with what comes after in a people that barely have a now.

Even you, with all your hoarded centuries, hardly take the time to consider what will become of the world once its only sun is warming your belly.

You have never feared tomorrows.

The next time, Kyoseong gets there ahead of you. A residential area ablaze, from a lantern that’s slipped its hook or was tipped in a drunken stupor. He is helping herd displaced civilians away from the inferno when he pauses, looks back.

For a moment, he simply watches the fire rage.

A wall buckles. The ceiling bows. You reach him before the roof does, but only just.

When your ears cease ringing, you can make out the muffled shouts of the brigade on the other side of the rubble. The dark is absolute.

Kyoseong coughs weakly beneath you. His fingertips trip across your chest where the hardness of scales gives way to coarse fur. “Geon?”

You grunt. It ends in a wheeze.

“Did a building just fall on us?”

You give your shoulders an experimental roll. Nothing much budges, though the ceiling beam across your back groans ominously. You stop moving. This much weight would have crushed him. Might crush him still, if your legs give way before the rest of the brigade digs you out.

You swallow a barbed comment before it can spill past your lips, exchange it for a more neutral query. “Are you damaged?”

Wonder creeps in. “I wouldn’t have thought you could survive that.”

The heat folds tighter around you. It offers you no discomfort, but you can smell the tang of sweat collecting on Kyoseong’s brow, pooling in the crook of his neck.

His voice is careful. “I would prefer not to bake alive.”

When you tuck your chin, your snout grazes the hollow of his throat. He swallows. You can tell he is imagining it, his life pumping thick and hot through your teeth. His fingers card through your mane.

It doesn’t matter what about. (You call him feckless. He calls you worse. Yet, still, there is no refuge in a distance that neither allows to spread between you.)

You suspect that you would have done it regardless of the topic: stolen Kyoseong’s death from him, precisely because he treasured it.

He lets himself touch you without pretext. He has to reach up to do it. “You’re lying,” he whispers.

He is a quick study. He will grow accustomed to immortality.

And tomorrow, you think, you will tell him. 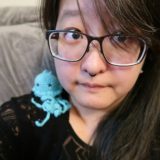 Jei D. Marcade is a Korean-American speculative fiction writer whose work has appeared in PodCastle, Strange Horizons, Escape Pod, and Goblin Fruit. They can be found haunting jeidmarcade.com or tweeting sporadically @JeiDMarcade.