For me, fiction always starts with a what-if.

The work may start with an image or feeling, but at that point it could still be poetry. It doesn’t really become fiction until that what-if element leads me to a succession of events, a story. It’s a literal counter-factual: the what-if reality were different, if dragons existed or history had played out along other lines or technology allowed us to travel to the stars. What would that be like? How would it change everything else?

These what-if ideas are powerful, because they let us imagine a different future or present, and they are particularly powerful when we do the work of imagining those possibilities through coherent stories. By connecting our wildest imaginings to stories that make narrative sense, stories in which we can see ourselves participating, we expand our concept of the possible.

Although the examples I used above suggest speculative genres, all fiction is speculative. What if there was a family that had these problems, and one of them did this? What if there were people in these positions and they found a passion they could not resist? What if I had written down everything I have semi-forgotten from my childhood?

Still, with the more overtly speculative genres we can break some more rules. We can get further from reality, or closer to what we wish reality was. We can focus a little more on the changes in the world—magic systems, world peace, human cloning. We can imagine something more different.

We’re a little more used to the role of historical fiction, which has a critical function in the building of identity. We tell ourselves stories about our lives, our childhoods, and our accomplishments, inventing biographies that, whether they inflate our own importance and virtues or not, make sense on some fundamental level where rigorous reality might leave us unsatisfied. The childhood story that has been told so many times by adults that we remember the story rather than the memory; the slightly exaggerated story told at a party; the CV that is not inaccurate but maybe a little tilted in our favor. We build and layer and contribute to stories about nation or organization, creating missions and meanings and collective identities that allow us to cohere as a group and take action together, even when there is little that objectively binds us together. We embellish or poeticize, invent a little, tweak a little, smooth out loose ends. We may miss this when we do it ourselves, but we’re used to the idea that it happens. We expect unreliable narrators, in real life almost as much as in fiction. We take people’s histories of themselves with salt shakers, imagine between the lines of their imaginative histories.

We use speculative fiction all the time too. We plan, projecting out futures with varying degrees of likelihood. Sometimes these futures are utterly impossible, but imagining them gives us some solace, or helps us ready ourselves for more plausible versions of the same story. Sometimes they are more realistic, and help us role-play upcoming situations.

And this is not just individuals. Countries or businesses develop five-year plans, ten-year plans, fifty-year plans, that imagine increasingly un-evidenced futures. Strategic documents, cost-benefit analysis, profit forecasts, all of these are forms of fiction. Political polls try to tell us what is going to happen, as do weather forecasts, and sports commentators. Our lives are increasingly entwined with a future built out of speculation and spit. Yes, they are based on something—on the past, on calculations, on ideas about what will happen when new products are unleashed on the market— but so is science fiction. Science fiction—if it’s any good—draws from observation of the past and present, the combining of new ideas with existing wisdom, and leaps of imagination based on what is known about current and day-after-tomorrow technology. Our societies draw a hard line between futuristic stories, in which we have fun or romantic or scary or exciting things happen to made-up people, and futurist projections, in which we pretend that we know what the future will be like and describe it without any made-up people at all.

There are public fantasies as well. Disaster researcher Lee Clarke has dubbed the disaster plans of many industrial actors “fantasy documents,” because they comfort the public while having no basis in reality. (As a mostly science-fiction writer I feel I should note here that I mean no slight on fantasy fiction through this comparison, any more than I meant to insult science fiction by comparing it to political polls or weather forecasts). The spin on new political initiatives often verges into the realm of fantasy, with claims not even the writers believe are realistic. Similarly, advertising often attempts to sell us portals into a brighter, shinier, much more annoying world.

We even create alternate universes, as in the form of shadow governments, which in many countries choose representatives for major government roles to talk about how policy would run under their leadership. These storied institutions exist to present alternatives, to act as either an inspiration or a warning, depending on your perspective, inviting their constituents to imagine a different world and they hope that by doing so they can convince them to make that world the next time they have a chance to vote.

It’s striking how much more willing we are to admit that our depictions of the past are partly fictional, than that our ideas about the future, so much more tenuous in their foundations, are based on similar impulses to self-aggrandizement and mythologizing rather than “hard science.” Maybe this is also why historical fiction has so much more literary cache relative to speculative fiction. Having accepted that a lot of our history is fiction already, we are less concerned about drawing a line between stories and reality. We don’t feel as compelled to mark off historical fiction as something that is apart, imaginary, and distant, something that is only of interest to a subset of the population. Science fiction and fantasy, on the other hand, are usually positioned in exactly that way, as something that is too made up to have a real impact on our world, while the speculative trappings of real life are claimed as objective and rational calculations.

Hopefully in the future that will change, because we need to do better at connecting our predictions to our sense of stories. 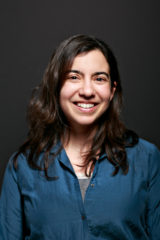 Malka Older is a writer, aid worker, and sociologist. Her science-fiction political thriller Infomocracy was named one of the best books of 2016 by Kirkus, Book Riot, and the Washington Post. With the sequels Null States (2017) and State Tectonics (2018), she completed the Centenal Cycle trilogy, a finalist for the Hugo Best Series Award of 2018. She is also the creator of the serial Ninth Step Station, currently running on Serial Box, and her short story collection And Other Disasters comes out in November 2019. Named Senior Fellow for Technology and Risk at the Carnegie Council for Ethics in International Affairs for 2015, she is currently an Affiliated Research Fellow at the Center for the Sociology of Organizations at Sciences Po, where her doctoral work explored the dynamics of post-disaster improvisation in governments. She has more than a decade of field experience in humanitarian aid and development, and has written for the The New York Times, The Nation, Foreign Policy, and NBC THINK.