I had just been to a first-run showing of the original Star Wars when I started keeping a notebook of my plans for outer space. The stories there came with star maps and spaceship diagrams. It was a galactic conquest, but of a benevolent sort. That was a long while ago, but still on the scale of a human lifespan.

I wonder, looking back, if it wasn’t the sense of freedom, of new beginnings, of shared excitement at a new frontier, that really spoke to me, more than the glossy spaceships and hammy robots.

And I wonder that no one then acknowledged the years—decades and centuries, probably—of hard work and patient exploration that were elided from the movies, and my stories, to frame the moments of exhilaration.

Now, looking at the notional map of our spacecraft’s path is—it’s thrilling and a little frightening. I don’t even know what “The G Cloud” is, or “The Hydrogen Wall”, or “Termination Shock.” They were nowhere in those notebooks. It’s hard to believe that there are major features in our own Solar System that I’ve never even heard of.

But I’m an engineer, not an astrophysicist.

I’m helping design a spacecraft to go one thousand AU1 from the Earth in 50 years, from a launch date sometime in the 2030s. That’s our goal.

The organization2 that I work for designs, builds, and operates spacecraft for NASA. We’re developing a mission plan to send a spacecraft out beyond Pluto, through the unexplored outer region of the Solar System, and into the interstellar space beyond.

We’re not the first to make plans like these. To date, the history of interstellar voyages3—the real one—has been a trail of ambitious mission proposals, scientific curiosity, engineering determination, disappointing technical studies, immutable physical constants, unyielding budgets, disillusion, eventual heartbreak—so many plans just compostable paper now. It’s a long, long way to get anywhere interesting. The costs are too great, the distances too far, the environment too harsh. The travel time is far too long.

But we hope our effort, Interstellar Probe4 (ISP for short) will be different. Our proposal is not “what we should do” but “what we can do.” Not dreams built on unlimited schedules, infinite budgets, unrealizable technologies—instead, something we can actually start to do with the technology sitting on our benches right now.

The Lab has sent spacecraft to some far objectives already: New Horizons to fly by Pluto, Parker Solar Probe to loop close to the Sun, Messenger to orbit Mercury. We’re working on Dragonfly, a drone to explore Saturn’s moon Titan. We feel like we have a sense of what’s possible with current technology, or what will be available in the next n years (for small values of n).

Looking around the ISP system engineering meetings, either around a table or now in virtual meetings, I’ve caught myself staring at the faces. It has dawned on me, slowly, that we are old. Not all of us, certainly—there are some pretty brilliant young people on the project—and not excessively old. But we’re old enough that a cynical person, perhaps a more cynical version of myself, could be tempted to assign odds to each of us, what the likelihood is that we will live to see that spacecraft reach the termination shock, the heliopause, the Kuiper belt, the Oort Cloud—each of the regions the probe will pass through.

And it’s dawned on me also, that this—planning and building for a future you know you will never live to see—is an act of radical hopefulness. It’s not fake. It’s not a scam. It’s the real thing. It’s too hard, too costly, too demanding, for anyone to be doing it except with sincere motives. The people in that room will never live to see the fulfillment of the mission that they are planning.

And they’re doing it anyway.

Someday, long ago now (1160, allegedly) some people put some sticks in the ground, with strings tied taut between them. I picture a bit of drizzle; a gray, swimming sky. Those people were laying out the foundation for Notre Dame de Paris, a cathedral they would never live to see finished.5 Building a spacecraft to leave the Solar System, for us at least, will be like that.

Our sun creates an astrosphere6, a bubble of superheated plasma that pushes out in every direction against the interstellar medium. It blocks out harmful galactic cosmic rays; life on Earth probably couldn’t have developed without it. We can see, distantly, other astrospheres, but the Sun’s astrosphere is the only one we are likely to be able to investigate up close, for a very long time.

It’s our goal to explore and understand that interface, where these two great forces collide. It will be, of necessity, a multi-generational project.

And beyond? The best slide about ISP I’ve seen yet, the one that gives me goosebumps every time, is the one with a wraparound view of the sky, with various trajectory options mapped onto it over a decade of possible launch dates. There are a long list of possible targets, directions we could head in, objects we could investigate along the way. Orcus, Makemake, Eris, the enigmatic Sedna (possibly captured from another stellar system.) Something out there called, improbably, “2012 VP113 (Biden).” And a note about “rogue planets.”

There are an endless array of directions, of paths through the sky: an infinitude.

This makes me sound like a starship captain (I wish!) but I won’t be getting to make that decision. I’m just doing my part as an avionics engineer, sketching in the onboard communications network that will enable all the more exciting parts of the spacecraft to talk to each other companionably7, to make the whole thing work together.

And that camaraderie among the various instruments and components of the spacecraft parallels that of the team. Nobody has bailed—I haven’t found a single person yet who’s said “I don’t want to do this because I won’t get to see the results.” I’m humbled and proud to be a member of this team, to do my part.

We don’t talk about it, but if you scratch a NASA scientist or engineer, you’ll find a science fiction lifer. It’s there, in the art hanging in people’s offices, the stickers on their laptops, the books on their shelves. You can see the connection between the ideas in fiction that inspired the reality, the discoveries in the science that gave new fuel to the fiction writers; the two together caught in a quickening, ardorous dance.

It makes science fiction writers complicit in this mission too. All you lovers and scribblers of fantastic stories, stories where the sky is no limit, stories where future technologies are indistinguishable from magic—you helped create this. You did! SF is a multi-generational project too, a conversation down the years and up a rich, branching tree of ideas. Your hopes, and sense of wonder you create, will go with that craft on its launch day, as well.

I think of the hopefulness of a farmer planting an orchard, never to eat her own harvest. The patience of landscape architects, planting saplings at the end of their lives. Potters laying up clay for the next generation of potters, so that it ages properly before use. Those earnest people—not simple, no, but deliberately hopeful—the planners, artisans, laborers who together set out to build a cathedral, knowing that they won’t live to see its steeple raised. I think we’re like them.

They could have waited for the invention of I-beams, internal combustion, construction cranes, concrete. It would have made things a lot easier. They didn’t wait. We’re not waiting either.

The whole of interstellar exploration is like a massive, multigenerational marshmallow test, that we have to pass together if we want to see what’s beyond.

Every map has an edge. Humans shouldn’t accept the edges, we shouldn’t wait for it to be easy or straightforward. We should question edges, we need to keep asking “What’s over there? What’s beyond? How can I get there?”

I think of the traditional map-edge denizens, those doubtful giant fishy creatures and anthropomorphic pucker-lipped clouds blowing up angry storms. I think of exposing my friends, these sweet-hearted optimists—not their persons, but their fragile vessel, the conveyance of our hopes and dreams—to the modern equivalents of those monstrous unknowns.

What would happen, if that spacecraft were seized in the jaws of some equivalent modern beast? If we didn’t plan for the cosmic rays and the gamma rays, the swelling total radiation dose, possible loss of radio lock, battery cell fatigue, metal migration, the sheer weight of years? Or something equally monstrous, yet unknown?

What would happen to us, and our hopes? Everyone knew, when the cathedrals were started, that the only possible outcome was for them to be finished, eventually, right? Maybe it might take decades, maybe centuries more than originally thought. But this spacecraft, venturing into unexplored regions of the interstellar medium, could simply fail, catastrophically, and we’d never know how or why. We’d just be left with a haunted, sky-sent silence.

It’s a risk worth taking. I say this not blithely, but mindful of the huge effort and resources at risk. The first trip into a new frontier is the most important one. Opening up a new frontier will give us new knowledge, new insights, and inspire later, better prepared efforts.

Forgive me for speaking for my colleagues, but part of what drives us is the belief that, if we set out to do this, there will be people who come after us, who will listen and hear our fragile spacecraft whispering back to us the long-sought secrets of the astrospheres, from so very far away. That they’ll do something great with that hard-won knowledge. That this won’t be the end but the beginning.

It gives me a feeling so deep and broad and nourishing and sustaining that at first I couldn’t put a name to it, couldn’t put a single word to it, to encompass it all.

People keep holding out for some undiscovered force, maybe something that Einstein overlooked, or that aliens embedded in an artifact hidden on the far side of the Moon, that will get us to the stars. Well, I’ve seen that enveloping, all-conquering force, that immense power, the thing that will take us there. It’s not a hyperdrive. It’s not dilithium crystals.

Its name is hope. Hope for the future.

[3] NASA had barely been invented and this mission was already on their list of goals. Interim Report No.3 to Space Science Board of Committee 8, Physics of Fields and Particles in Space, March 1960; “Outer solar system probe: to be aimed away from the Sun in the plane of the ecliptic.[…]”

[4]  http://interstellarprobe.jhuapl.edu — boy howdy I hope they come up with a better name before launch.

[6]  The Sun’s astrosphere is so important it has a special name—it’s called the heliosphere.

[7] My own small tech development effort is something called “A DC-Balanced Encoder for Galvanically-Isolated SpaceWire.” It’s one piece of a system made to prevent an eventual electrical failure in one component of the spacecraft from propagating to other components; a kind of immune system, to prevent contagion from sweeping through an aging, sickening spacecraft. I’ve spent a fair bit of personal effort on it, and I hope it will become a tiny, nifty footnote to the history of space exploration (somewhat like this.) 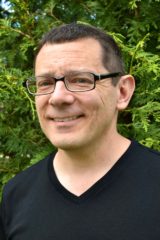 Christopher Mark Rose’s stories have appeared in Escape Pod and Interzone, and forthcoming in Asimov’s. He founded the Charm City Spec reading series for speculative fiction in Baltimore. He attended Viable Paradise XXIII. He hopes that his work is humane, affecting, and concerned with large questions.

He lives in Baltimore with his wife, two kids and a crazy dog, and works at the Johns Hopkins Applied Physics Lab. His flight hardware flies on: the Van Allen Probes, Parker Solar Probe, IMAP, DART, soon on Dragonfly and (hopefully one day) on Interstellar Probe.