Cheese infused with pork rinds! What a disgustingly absurd food to find at a supposedly upscale dining establishment! What kind of person dreams up such a thing? How does one, exactly, infuse cheese with pork rinds? Are they crushed and mixed in? Have they been liquefied? Where could I even find it in the wild? I wondered on the way to my table. Was it something I could order on Amazon?

It was only once I draped my jacket over the chair and asked for iced tea that I realized the waiter probably didn’t say pork rinds. My “second mind” as I call it—the part of my brain that keeps turning over what I hear long after I’ve heard it—had been stealthily working towards sense. Port wine is what the waiter said. Cheese infused with port wine. Not pork rinds.

Disappointment. Not really because I was going to miss out on pork rind-infused cheese, but more so because such a thing didn’t exist at all. Yet it had for a few minutes in my mind, and the ridiculousness of it was extremely entertaining.

My world is full of this kind of sudden and marvelous invention. My hearing loss allows me to experience a reality that others do not. That beeping noise? The one I think is a beeping noise? I don’t know what it is—a truck in reverse, the microwave, an alarm—so I can do one of two things: investigate or make up an explanation. Left to my own devices, I’m prone to do the latter.

That beeping noise? Probably a robot that’s broken into my house, and that robot likes to play games with people; its programmed sense of humor is to beep at me to see how long it takes for me to figure out that I’m going to die because it’s not just a robot, it’s a killer robot.

That rush outside? That ooooosh or whoooosh or shhhhhh? It’s the ocean. While I’ve been at my desk, blinds closed, the sea has risen because Rip Van Winkle has cursed me and hundreds of years have passed. I’ve been in my own world for longer than I know, and now, climate change has reached its catastrophe and the ocean floods the streets outside my house and the world is water water water.

What wakes me when I’m sleeping—that sound that doesn’t have a sound, but is only the memory of sound—is a portal to another dimension. It’s opened in my kitchen and two people are looking through it. When the woman, at the precipice of understanding, sees it start to close, what I hear are the last syllables of her scream. Anger, terror, a plea. I’ll never know.

These are the private thoughts in my world of diminishing hearing. I don’t voice them to many anymore, because I’ve found that people’s reactions can be hurtful: sidelong looks and quasi-admonishments meant to imply that the way I interact with the world is just not right.

I’ve always been a reader of fantasy, growing up with Madeleine L’Engle, C.S. Lewis, and Phillip Pullman. I was the child with a flashlight under the covers hoping not to be discovered after it was time to go to sleep. When I was younger, these stories were simply my escape hatch to a different, more interesting world. But as I grew older—as my hearing deteriorated—my connection to fantasy literature changed. Reading fantasy became less of an escape and more of a mirror for my experiences in the world.

Fantasy and fabulist literature seem to validate my cognition. The “unreal” or the “impossible” aspects of fantasy are part of my everyday experiences. When we read fantastical fiction we suspend our disbelief. We put our dualist notions of the world—“real” and “unreal”—away. When we read this fiction, we exist in a liminal space where impossibility—the magic, the bizarre, the will of gods imprinted on the everyday life of mortals—is not just possibility, it is reality.

It’s people’s inability to suspend disbelief when not reading fiction that shuts me down when I want to try to explain why I just told you there’s a giraffe in the bathroom. Or why I’m convinced the house across the street is filled with wizards. Or why once a month the veil between worlds thins for a length of time, just long enough for murderous ghosts to slip through.

If I told you the groaning of a pipe sounded like a muffled giraffe’s call; or if I told you the neighbor’s choir-robed children, combined with their cat that howls all night long, made me think some black mass was going on; or if I told you the tornado siren—which I knew must have been a warning but I didn’t know of what—was what prompted concern about blood-thirsty spirits, then you would not live in the fantasy I experience. You would not exist in the space and place where the fantastical makes sense for explaining events. You would have a dualist view of the world, seeing my creations as “unreal,” and you would never understand that in my head, they were real, if only for a moment.

I am the third in line, that I know of, with this genetic hearing loss, and everyone in my father’s side of the family with hearing loss is also inclined toward fantasy: the experiencing of it, not necessarily the reading of it.

My father’s father wore hearing aids. Large ones. Hearing aids that squealed all the time. He was an economics whiz, a man concerned with history and politics and classical languages—what others might see as an academic—but what I remember is a small man who pursed his lips in an odd way and didn’t look at me in the eye when he talked but rather gazed to the side. A man that over the dinner table would tell stories about Super Warthog. And Super Warthog was covered in warts and solved mysteries and sometimes had crazy mechanical contraptions to aid him like Inspector Gadget. Sometimes my grandfather reimagined the labors of Hercules with Super Warthog.

My father is also an academic; he teaches law. He’s concerned with power structures and linguistics and cognitive science, legal pedagogy, and he also plays baroque trumpet. He cannot recall the last time he read a work of fiction, but he does remember reading Saki in his youth, how funny the story about the mischievous, personified cat was, and it’s not out of the ordinary to find the two of us in conversation, theorizing about how Beowulf might have been different had Grendel worn hearing aids he could turn off.

A part of me wonders if our penchant for the fantastical is because of what we hear, and don’t hear. It cannot be a coincidence, the way our minds process sound and push us toward this type of invention. I wish I had more hard-of-hearing people to ask about this. I wish there was a branch of psychoacoustics that studied the link between hearing loss and fantasy, because although I live in this “real” place, I also live in speculation, a land of whats and whatifs and stories of explanation and mishearings that alter what I understand to be true. I slip between “real” and “imagined” into a space that is both and neither at the same time, and it would be nice to know I wasn’t, in yet another way, a disregarded outlier.

I don’t really like to wear my hearing aids, even though my audiologist tells me I need to. I should wear them regularly, he says. Consistently. I nod my head until he stops talking.

I don’t feel like explaining to him either, the professional who tells me what is best for my body and mind, that I’m not going to wear my hearing aids all the time because of the joy of mishearing. How I’ve come to crave the space where I create new realities. Sure, I wear them at university. At meetings. When I’m on the phone. But on the weekends, and over long breaks, they don’t go in at all, and my days are filled with investigations and nonsensical explanations.

My hearing loss provides for private entertainment, ideas for short stories, and quite honestly, a living experience that often feels a bit magical. But there is nothing magical about my impairment. It does not give me powers. It does not make me special. It is not the result of fantastical intervention. I do not romanticize disability. I am not pretending that my hearing loss is amazing—some magical thing that makes the world grand and bright and enchanted (although when I am not marginalized for my disability, the world can feel like such).

I am simply a person with a hearing impairment who, most likely, is also neurodivergent, and finds a kinship with fantasy because it makes her feel less alone. I still think about the necessity of learning sign-language, and I worry about what will happen to my career when I can no longer hear what my students say. I fret over the loss of instrumental intricacies I know is occurring on a yearly basis when the music I hear sounds different over time. Sometimes I even mourn the inability to hear the crickets I remember from my childhood—the ones that kept me up at night, right outside my bedroom window. But I also know, in part because of reading Borges, that losing my hearing is a new way of seeing, and like his blindness was a door into language, my hearing loss is an opening into a further fantastic.

I know as I write this essay, that the thud I heard just now—the one coming from the front yard—has no connection to the sun that has literally just set. But knowing this does not change that for less than a minute—just a few seconds—my imagination leads me to believe that Helios’s horses have spooked. The god’s chariot, pulled askew, dropped the sun, which plummeted down and crashed with an impact so far away that even though I heard it, it was nothing but a dun sound. 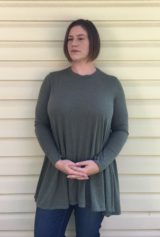 Gwendolyn Paradice is a member of the Cherokee Nation, and her nonfiction has earned nominations for both the Pushcart and Best American Essay. Her nonfiction, fiction, and poetry have appeared in Assay, Crab Orchard Review, Fourth River, Booth, and others. She retains a MA in Nonfiction from the University of North Texas, a MFA from Bennington College, and is currently pursuing a PhD at the University of Missouri. She specializes in genre-bending, speculative writing, and the study of folkloristics and global anglophone literature.