A successful story lives or dies under the banner of verisimilitude.

Good writing, we are told, reveals intellectual, spiritual, and emotional truths, as well as it is enjoyable and compelling. Engaging ideas, complex power dynamics, the strengths and frailties of the human condition—this is the stuff of quality storytelling. Fiction’s success carries another, somewhat contradictory, characteristic: these universal truths come to life using people, places, and things that only have to appear to be real. That facade is a veil writers drape over their readers’ eyes in order to make the magic happen.

When there are tears or holes in that veil, readers notice. If the fabric proves too flimsy and becomes shredded with use, the reader notices.

When and how the story falls can vary, but believability is one of those factors. A story’s believability—also called verisimilitude—has roots in the dramatic concept of mimesis, the Greek Platonic and Aristotelian theory that states that a work of art should convince its audience by imitating nature and having a basis in reality. Even in fantasyscapes, as long as the constructs of that world are understood as being feasible to the reader, then they pass the suspension of belief. More and more frequently, the guideposts of verisimilitude are shifting. Increasingly so, the conflict is centered on how fiction—especially speculative fiction—should be “historically accurate.”

For creators and audiences alike, the stakes are serious. In today’s all–consuming mass media age, there are many types of people who have been turned away from the silver screen, tokenized or stereotyped on the small screen, and poorly–written and portrayed in many things written and told. People are sick of the lies—not the lies of fiction itself, but the power that these lies hold in supporting inequality. People of color didn’t exist in medieval Europe—or anywhere else before 1600 (unless they are barbarians or ninjas). Women are being tossed into figurative fridges left and right while a nice chunk of Man–Pain thaws on the countertop. Folks who are neuroatypical or differently–abled get cast as unstable, destructive, pitied or “super–crips.” The casualty list goes on and on.

But, let me admit one thing: I’m frustrated by the argument that compares the marginalized to sparkly unicorns or dragons or the flat–out fantastic.

For example: “In this fantasy book/film/video game/entertainment medium, we can have werewolves and magic and an evil dimension–hopping overlord, so why can’t we have people of color?”

I’m tired of comparing real lives to the props of the imaginary. Using this argument, difference only matters if it’s being transformed into a metaphorical sparkly unicorn, as opposed to existing as a valid point in itself. Representation matters because it reflects our reality, not because it is equal to unreality.

More realism—specifically, more minority and disenfranchised experiences—is needed and wanted to counteract these society false ideas about them. Yet comparing the right to include real identities and honest experiences with the right to imagine anything (including its erasure in the first place), turns the argument for representation into a pretzel of irony.

Yet why is this argument so often used? There are, of course, valid points for diverse and nuanced representation. Studies have shown that reading creates empathy. Wider representation would then create more empathy for real–life people and situations. The marginalized are empowered by seeing representations of themselves in fiction. Stereotypes and sloppy storytelling can lead to misunderstandings about how to interact with actual survivors of violence and trauma. So I agree with the importance of representation in itself. What I feel frustrated about is why must we equivocate ignored realities as being as valid as the purely imaginary.

Part of my ambivalence also lies in how we value the power of fiction as something that can supercede reality. The writing philosophy of Guy Gavriel Kay encapsulates this idea very well. Kay writes historical fantasy in the most unfantasy–way possible. But, while evoking the time periods, places, and cultures of long ago, he had always been upfront about why historical fantasy is important:

“By placing the story in a fantasy setting—even if it is clearly drawn from history—we are acknowledging that this educated guesswork, invention, fantasy underlies our treatments of the past and its peoples—and for me, that is an honest and a liberating thing for any writer to do… It isn’t just an evasion, an escape, a hiding from truths of the world: it can be an acknowledgment that those truths are complex, morally difficult, and that many different sorts of techniques and processes may lead to a book’s resonating deeply for a reader and a time.”

Now we have two ideas at odds with each other. First is the idea that fantasy is often criticized as being “historically inaccurate” when it breaks the suspension of disbelief. Second is the transcendent quality of speculative fiction by providing the distance needed to address topical matters.

How can we connect these two ideas? And why do we, as media consumers and creators, conflate verisimilitude and accuracy?

Verisimilitude is what good writing strives to create, but readers mistake strong verisimilitude for “accuracy.” Verisimilitude means effective world–building, period. It is building a place and time that feels real, separate from any other (even if it makes a comment about ours—I’ll get to that in a bit). Assessing verisimilitude is judging based on the internal logic of that world.

But to gauge something via a measure called accuracy is a subjective compilation of assumptions—the ultimate assumption being that a fiction’s reality is solely based on our world, and so must be judged by our history. Often our understanding of history is just as fictional: riddled with stereotypes, false narratives, “common knowledge” that doesn’t have actual historical basis. Our common knowledge of history can be very flawed; for example, in a recent survey, 41 percent of respondents believe that humankind existed at the same time as dinosaurs.

Such assumptions can also foster stereotypes, whether they are actually true or not. People can be rational, but more often than not, people also rely on facts based on gut feelings. And those gut feelings can stem from anywhere from textbooks or research, to thoughts from your friends, family, religious leaders, teachers, television, video games, Internet forums, reddit, tumblr reblogs.

When “cultural feelings” rule over facts, even simple statements sound revolutionary when faced with a “norm” that assumes otherwise. Kameron Hurley’s “We Have Always Fought” about the historical existence of women warriors, or Balogun Ojetade talking about black people liking steampunk aren’t complicated to understand, but can be surprising to hear for those who haven’t seen otherwise in the media. These assumptions even influence our interpretations of what we see, even if we don’t openly recognize that bias. The impact of institutional biases—like what can or cannot be taught in schools—can reinforce certain narratives over others. All of these narratives—about a community, a people, a country—become enshrined in public memory and “common knowledge” as the barometer of accuracy.

Coupled with these “factual” biases is the idea that today’s world is intrinsically better than any worlds based on a “past”—even if that past is entirely fictional. Game of Thrones versus Merlin versus Galavant—all are examples that can be measured of a sliding scale of believability. We think that the past is always worse than our present and to think otherwise is “unrealistic.” Granted, there are aspects our of society that certainly made it better—penicillin, flush toilets, and the computer come to mind. But the past isn’t always worse than our present—it is only different. History benefits certain people and certain identities at different points. To recognize that history itself can be an alien place is to also acknowledge how today’s world is far from being perfect either.

Thinking that “past” times were more oppressive also ignores the still–existing oppressions today (all of which do have historical roots not commonly known). The assumption that there was more violence against women in medieval times, for instance, handwaves the fact that 1 out of 6 women will be sexually assaulted in her lifetime today.

In light of all of this, how can we stop the use of “historical inaccuracy” as a measure of quality? And, in addition, how can we move our arguments for representation past the “sparkly unicorn” reason?

It’s not easy. There is no one–stop solution, but I can think of a suggestion.

Never critique a speculative fiction work based on historical accuracy, but on its effective verisimilitude. Earlier, I referred to verisimilitude as a concept separate from accuracy, and here’s why.

The first step is recognizing that a story’s verisimilitude isn’t equivalent to comparing it to “our world” or “our history” (or, more precisely, our subjective understanding of both). The story’s world is completely autonomous. A piece of fiction may have similarities to our world. The author may draw analogies or allegories or serve as social commentary, but all of these aspects are separate from the world itself (and will come in later).

Remember how I said verisimilitude is like a veil that covers readers’ eyes? Judge the quality of the veil itself: its stitching, its weave, its weight and texture, and your enjoyment of it. Each artwork’s verisimilitude is a different type of veil. Don’t compare the veil to your normal vision or to other objects that can’t serve as veils. A handkerchief is different from a woolen scarf, but by all means neither is the same as a lawnmower. For the veil of verisimilitude, notice where the patchwork is or if the fabric shreds between your fingers.

Where does the other half lie? In the reader’s perception.

If you feel that a story’s verisimilitude doesn’t sit right, ask yourself why. Fight assumptions, even your own. Ask yourself, “Why does this aspect of the story take away my suspension of disbelief?” Is the reason rooted in “common knowledge”? A “gut” feeling? Does it rail against portrayals you’ve seen a hundred, no, a thousand times before? Do these realizations make you feel uncomfortable?

Or, taken another way, does the story’s world seem limited in its realism? Do all characters of a certain background equally suffer or face the same outcome, no matter what circumstances? Given the set–up of the world, is anyone missing who would logically be there? Is there a mindset or a magic system or any other storytelling aspect that reveals intellectual or emotional fallacies, given what had been established by the creator?

When examining the verisimilitude of a narrative in this way, what a reader chooses to handwave can be recognized as subjective and even biased. On the other hand, what is seen as believable also reflects upon the author’s worldbuilding, and what is understood as the story’s norms (or not) are fair grounds for critique.

Quality storytelling is the bridge connecting the skill of fiction (keeping up the suspension of disbelief) to the meaning of fiction (its transcendent quality to address real life).

And maybe with a sparkly unicorn or two for good measure. 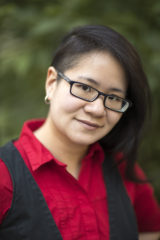