The Perils of a Hologram Heart

We found ourselves once again at the Organ Zoo. While we gazed at the giant livers of extraterrestrial water worms, Arc asked me to tell him about the nineteen nineties.

There was nothing I could describe that I hadn’t described before. I had already told him a thousand times about my highlights, my gelled ponytail and baby barrettes. My wide leg jeans and tight t-shirts. The mixtape I made for my first boyfriend. How sad we were when Tupac died.

Instead of answering, I leaned closer to the liver, nearly pressing my nose against the glass.

He cleared his throat and I looked over at him. He had genetically engineered himself to look like someone from my time. It wasn’t surprising that I found him attractive, especially in this era of outlandish appearance mods. To me, he looked normal, but better. A cross between Justin Timberlake and Freddy Prinze Jr. He wouldn’t have been out of place on a sitcom about roommates.

He cocked his head and I swooned despite myself. I wouldn’t ever be able to date someone better-looking. Was that a good enough reason to keep seeing him? Probably not. The downside of indefinitely long lifespans is the inertia that accompanies the surplus of time. You keep putting off the hard thing until later, and there is plenty of later to be had. One hundred years pass and you’re still seeing the same guy you meant to dump after the third date.

Maybe there was someone better for me out there, maybe not. I had little experience dating. Arc was the only romantic partner I’d had since being thawed out.

“I need a new body,” I said, because I did. I had moved on to a display about modified uvulae that were favored by overtone singers. To me they looked like disgusting piles of pink flesh, but the polyphonic tones they produced were quite beautiful.

Arc ran his hand through his hair, frosted at the tips.

“I thought we agreed you didn’t.”

I scoffed and walked over to the next display. It offered a magnified view of the vomerosomes of an inner galaxy pentapod.

The Organ Zoo was run by Them. They had a name, but biohumans could not really replicate the sound of it. And since Their aesthetics and technology governed so much of our lives here on Earth, we didn’t feel the need to try saying it. They were just Them, uppercase.

They were fascinated with what They thought of as the beauty of life. The Organ Zoo displayed Their favorite specimens.

They had brought me back to life, per my own instructions. My cancer had been on the verge of killing me back in 2038 and I had run out of treatment options. Back then, cryostasis was a treatment of last resort. It took 1,700 years and first contact to bring me back. On one hand, I was glad to be alive again. On the other hand, I wondered what had taken so long.

Existence was very painful at first. They had dispatched my cancer quickly, but my organs kept failing almost as fast as they could print them out. Eventually, nostalgia gave way to practicality and they began reengineering my insides. I was part planarian, thanks to the regenerative properties of their cells. My intestines were at least half extraterrestrial, mostly aquatic life, though the exact proportion varied from day to day. My magnetic and electrical impulses were modulated by a hologram that lived in my hollowed-out chest cavity.

Things kept going wrong and the interventions were becoming increasingly baroque. I had to sleep in a special regeneration chamber, room-sized and built especially for me. I couldn’t go off-planet; low-gravity might upset my delicate equilibrium.

Arc had been to distant parts. Had even met the other primitive intelligences that lived nearby. He said they were nothing special. Not as special as the nineteen nineties had been. This was the best planet. And I was the best person on it.

Since my thaw, I had also modded my appearance. I refashioned myself as a cross between Aaliyah and Jennifer Lopez in her fly-girl era. Despite being pretty, the charm of my meat cage had worn off. I was finally ready to go full mechanical.

“It’s time,” was all I said. And that’s how he knew. We had been together long enough that we could conduct all our arguments in shorthand. Every disagreement could be abbreviated into a few words or gestures designed to provoke. Arc crossed his arms. I sighed heavily and abruptly left the Organ Zoo without him.

For once, I didn’t procrastinate. For once, I acted right away. I had the procedure done that night and then donated the body to Them.

I woke up as a Mech. Even though I had asked for it, I was startled by my lack of skin.

It was 3 p.m., three hundred years in the future.

“What?” I asked. I could hardly believe whatever sensory organ was processing this information. They communicated nonverbally, assuring me that great care had been taken. Complications had occurred. Medical and legal, both. I was not like the other post-humans They operated on. I was a species of one, with my bespoke organs and heart full of magnetic light. So they proceeded slowly. At one point, several of my organs gained sentience and I was pronounced a superorganism. My liver sued me to stop the procedure.

My new body ached. Perhaps Arc had been right. Perhaps this hadn’t been worth the trouble. I wanted to look him up but didn’t want to fall into our familiar patterns, so instead I booked the first shuttle to Mars I could get.

Waiting for the craft, and in a moment of weakness, I texted him from the spaceport. There was a flight delay and he was nearby, so he came by to see me off. He brought his new girlfriend. He was dating Britney Spears. Good for him, he deserved to be happy.

On Mars, I gardened. Terraforming was proceeding slowly, but why shouldn’t it? We had forever. Eventually it would be green and blue like Earth. In the meantime, I liked it brown and red. It had a desert beauty.

Nostalgic for the Instagram era, I raised succulents. I sent Arc a pic of my garden via ICQ. He responded with an emoji.

I wondered if I was still too close to home. So I ventured farther out. To Europa, to Haley’s Space Station. A mechanical body is not perfect. You still experience pain and sickness, but on the bright side you can get treatment anywhere. I looked sorta like T1000, but not in a sexy way. I missed skin, I missed hair. I could get these as grafts but I kept putting them off. I wanted to look human again, but it was an aesthetic that was only understood by Earthlings and I was far off-planet.

I came back to Oakland for my grafts. I wanted to look old again, but better. Rosie Perez circa 2030. After a dozen years of procrastinating, I called Arc again. He was single, which was surprising. Even more surprising?

An endless life had kept him stuck. He said he worked better on a deadline. I spent some time with him and found the changes astonishing. He was calmer, more generous. Patient. And older, too.

He didn’t ask me about the nineties, he asked me about what I had seen on my travels. And I told him. About my Martian cactus garden and how I scuba dived on Europa. On the space station, I studied low-gravity ballet.

In the era I had been born into, we associated age with decline. Death, disease, and the disappearance of beauty. Wisdom was the consolation prize, but only because it couldn’t be traded back for the things you really wanted.

When I had been reborn, I was out of place. I struggled to fit in. New people were hardly being born due to limits on reproduction and most people had all the friends they needed by the time they reached the age 200. I was lonely, always on the dating and friend-finding apps, but only Arc had taken an interest in me. That’s because he was a nostalgist and I was a piece of nostalgia. We stayed together for far too long and had kept each other fixed in place.

Thus we had both missed out on one of the rarest and greatest pleasures in life: watching a person slowly change for the better. What I had been deprived of before, I wanted now. That’s how I knew I had to follow him into the unfamiliar. I, too, needed to make an appointment with the strange and silent land.

I set my death date 1,000 years in the future. And then hesitated and added another 1,000 years to my lifespan, just to be safe. Not yet, not yet, said a voice in the back of my head. What’s another millennium? How do you keep from putting off that most difficult thing? I asked Arc, but he said he was done mansplaining.

“Maybe it isn’t time,” I said. And perhaps it wasn’t. By my count, I was already on my third life. But I wasn’t on my last. He’d developed other interests, but he still thought heaven was the nineties.

“You can’t step in the same time river twice,” I said.

He nodded and I wasn’t sure if he understood or not.

“Never change for a guy” was a thing people said a lot in the nineties but hardly anyone says now. One of the pastimes of the present is modding yourself to meet the exact preferences of your lover. But I had reached for eternity back when hardly anybody tried and I wasn’t going to give it up now. He had an expiration date, which meant our relationship would too. It made him better, it might make us better as well. But as for myself, I would live at least one more life: a life without him. I wanted to hang on all the way to the heat death of the universe, or I wanted to die trying.

“I sense an argument brewing.” And he wasn’t wrong. So we came to an agreement. We would stay together until we couldn’t. We would hold each tightly until it was time to let go. 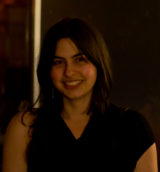 Dominica Phetteplace writes fiction and poetry. Her work has appeared in Zyzzyva, Asimov’s, Analog, F&SF, Clarkesworld, Lightspeed, Copper Nickel, Ecotone, Wigleaf, The Year’s Best Science Fiction and Fantasy and Best Microfiction 2019. Her honors include a Pushcart Prize, a Rona Jaffe Award, a Barbara Deming Award and fellowships from I-Park, Marble House Project, and the MacDowell Colony. She is a graduate of UC Berkeley and the Clarion West Writers Workshop.

One Response to “The Perils of a Hologram Heart”