This Isn’t the End: On Becoming a Writing Parent

We live in interesting times.

Some of us have always lived in interesting times. What’s different now is we can all agree that these times? They sure are interesting. There’s trauma and pain everywhere you look. Even a casual greeting at the grocery store includes an implicit shared understanding that this shit sucks.

I started this essay in February. I wanted to tell a story of hope, of rest, of kindness to others, but most of all to ourselves. I wanted to tell new parents: you’re not alone. Rest isn’t failure. Life is about ebb and flow, stop and go, rush and relax. This isn’t the end. This is just a pause.

Then the pandemic hit like a hurricane that we haven’t even reached the eye of yet. Some of us were able to pause our lives, some of us barely managed to hang on, and there was hope, yet, that we might return to normal, even if it was a new normal. We gritted our teeth and kept our kids home and stopped everything else because what else could we do? But the situation kept changing, keeps changing, the world shifting like sand beneath our feet, and there’s no end in sight to this perpetual state of holding our lives together through sheer will and spit.

Like many parents, I found myself torn between identities that had been at odds even before the pandemic: stay-at-home parent and work-from-home employee and author with a book out soon. On top of that, I was also struggling with an anxiety disorder while cut off from all of my support systems. I dropped a lot of balls and we discovered which had been rubber and which glass. It wasn’t pretty, but we survived. Are surviving.

I almost didn’t write this essay. Retaining your creative self while parenting seemed so inconsequential while the world was on fire. But in our new reality, it’s more relevant than ever. What is parenting if not an abrupt upending of your old life, replaced by a furious scramble at understanding the new one, constantly getting it wrong even when you get it right, constantly exhausted even when you sleep, and always—always—five steps behind where you think you should be?

This essay was going to be a reassuring hug of words to new parents, but it applies to us all now more than ever. We are all in this new world together and despite the sometimes apocalyptic foreboding, this isn’t the end.

Many of the new parents I’ve talked to in recent years have echoed a similar feeling: that their lives have changed beyond all recognition and they will never be able to create like they once did. And they’re right: it has and they won’t. But “not like they once did” is not the same as “never.” In parenthood there are a dizzying multitude of ways to be and experience parenthood, but they all share one thing in common: change.

Change came for me with the popping sensation of water breaking. In the following months, I had to learn a new language, one with decidedly less words than English and quite a bit more screaming. I had to figure out how to do everything one-handed: fold laundry, scrub sinks, cut vegetables. I had to relearn how to sleep whenever and wherever I could. Sleep when baby sleeps quickly became the running joke of our household: might as well clean when baby cleans or write when baby writes.

Every habit I’d consciously constructed and every habit unconsciously maintained were dismantled. New parenthood stripped me down to the basics and forced me to create a new way of existing during a time when everything else was raw, emotionally and physically.

And in case that wasn’t hard enough, I was on deadline.

My first mistake was pretending nothing had changed. I tried to write as I had before and I failed in almost every way. I failed at NaNoWriMo for the first time in a decade and I failed at the daily goals I set for myself afterwards. Self-imposed deadlines slid from my grip like the sleep I craved. None of the processes I’d learned and committed to before worked anymore.

But slowly, tentatively, I found a process that worked. I discovered upsides to the new parent life—long stretches of time to think, to plan, to create, so that when I did have the energy and space to put fingers to keyboard, the words were there, waiting for me.

Miraculously, I turned in my book before deadline. I thought I knew what I was doing.

Then my child changed.

Where a newborn had meant using every minute my hands were not filled with child to instead fill them with words, an older baby and eventual toddler meant my hands were empty but my mind was full of her. At any moment, an alert toddler could pull on the cat’s tail, highlight the wall, or stumble down the basement stairs, while a sleeping toddler could wake at any moment, screaming because no one was there. Naps became more predictable, but at the same time, less: you knew they would fall asleep, but never for how long.

Toddlerhood ushered in a desperate fight to squeeze in writing during any moment she slept. As her schedule shifted, mine shifted with it. I grasped for any multiples of minutes when I could guarantee she wouldn’t be awake. My biggest struggle became pinning down a solid window of time where there were no interruptions, no breaks in flow. Even when I cornered and trapped that time, I was primed for the sound of a small child waking up, crying out—needing me. I had to learn how to write all over again, but this time with a lack of focus instead of a lack of sleep.

But even when I didn’t figure out how to make it work, it wasn’t long before everything changed again. A few weeks or a few months, all I needed was to be patient with myself, with her, and there would be a chance to try again.

My child changed and changed again, but it got easier each time. Stability lingered longer and longer, allowing us to not only create routines, but appreciate them. The toddler became a child and learned how to play on her own. I trusted that I would have ten uninterrupted minutes, then fifteen, then longer, until I found I was interrupting her.

Other parents I’ve talked to have echoed the shape of this path, that it gets better in fits and starts, but it’s always different. That, yes, sometimes we can’t create. We’re too tired, too distracted, too goshdarned sick. Or better—we’re too enamored with the way our kid is playing, their babbling incoherence a story if only to them, their fingers and arms turning just so, finding the ways that a human moves and plays.

But always, always, we will be able to write again. Everything changes, but we will write.

If I could go back in time and give my new parent-self advice, it would be:

Rest. You will have time again. You can ask for an extension. You are doing your best. Let others care for you.

Find what you need that is absolutely necessary to work, to create, to feel like yourself, and fight to make room for that. For me, it’s time enough to think of plot and energy enough to put fingers to keyboard. More than those two things was a luxury, but one I still ached for. But getting down words, even a handful at a time, gave me hope, and hope was enough to see me through.

In all this you will learn a secret: that losing your ability to create or write or do what you love is temporary. Breaks are natural. Even though they can feel like a failure of will, they are part of the ebb and flow of creativity. We’re in a particularly large break right now and the world is even scarier than usual.

Dare to show yourself the same kindness and patience you show your child, your spouse, your friends.

It feels like now will last forever, but this, too, will change. And as one parent to the world: this isn’t the end. 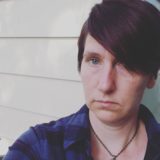 K.A. Doore is an author and shouter of queer sci-fi and fantasy. The Chronicles of Ghadid is her debut fantasy trilogy, starting with The Perfect Assassin, and she’s also written about murder and parenting at Tor.com and Tor/Forge, as well as in the upcoming anthology about parenting in SF/F, Don’t Touch That! She haunts the Florida swamps with her cats, children, and wife.