Through a Thousand Eyes

None of us lives in the same world. I told my niece that as she drove me home from Alki Beach last week.  We could be walking down the same sidewalk, I said, and still be seeing and smelling and feeling completely different things. I pointed out the giant, 35-foot-tall flowered shovel sculpture across the street from us as an example of one of those things. “What? A shovel? Where?” she replied.

We had just passed an earlier site of this particular epiphany of mine: a billboard visible off of the West Seattle Bridge advertising a bank’s services. “Use our ATMs anywhere, anytime, anyplace!” it urged proudly. Other writers I share this wording with get bothered by the same thing that makes me shake my head in disgust. What, we ask, is the distinction between “anywhere” and “anyplace”? Why mention both? It’s redundant.

Not everyone sees that error, or cares about it. The typographer viewing the billboard with me that first time was more concerned with the message’s kerning—the regularization of spacing between words, letters, and lines. He notices these sorts of things—fonts, relative sizes, serifs or the absence of serifs. He knows his Garamond from his Georgia from his Goudy Old Style. Not me. That’s not my world.

China Miéville does a brilliant job of literalizing this concept in his novel The City and the City. Inhabitants of Besźel and Ul Quoma occupy the same physical space while living in separate communities and experiencing irrecoverably separate realities. From birth, Besźelers are trained to “unsee” and “unhear” Ul Quomans, and vice versa. There’s a critique of nationalism at work here, of course. But mainly I love this novel because it’s doing what speculative fiction does best: using metaphor and analogy to show the unacknowledged strangeness inherent in the status quo.

Decades earlier, genius fabulist R.A. Lafferty took a different approach to this same idea of worldviews as distinct and exclusive worlds. You can read “Through Other Eyes,” the relevant short story he wrote, here, if you like, although I warn you that it’s served with a heapin helpin of gender essentialism. Lafferty’s hero, Cogsworth, invents a “Cerebral Scanner,” a technology which allows him to perceive what others perceive—not just in terms of the input their senses register but in terms of how they interpret that input. Cogsworth is horrified and repelled by the noisome mindscape roiling with decay he discovers when trying the device out on his crush, a woman named Valery Mok. Mok, in turn, is horrified by the lifelessness of Cogsworth’s perceptual cosmos and calls him “a pig made out of sticks.”

Comprehending how these differences change not only those in possession of them but their entire universe is a gift. And it’s a gift you’re free to claim.

Stories can operate somewhat like Lafferty’s Cerebral Scanner. Authors create empathy by immersing willing readers in the viewpoints of imaginary people created just to show how something that never happened would feel. We base these characters on what we know, who we’ve met, where and when we’ve studied them, how real we want them to seem, and why we think they belong where we’re putting them. Cindy Ward and Tempest Bradford and I use our book, essays, classes, and workshops to help our students calibrate their Scanners so that they capture the intimate details of the worlds of Others-with-a-capital-O. In editing New Suns: Speculative Fiction by People of Color, I did my best to make a huge variety of viewpoints available for readers interested in exercising their empathy. Writing Everfair’s Martha Livia Hunter Albin challenged me to plausibly adopt the vantage of a Christian missionary; more recently, writing Nia, the narrator of my forthcoming story “I Being Young and Foolish,” was likewise a stretch: an albino Ugandan sorceress traveling through 11th century Europe? That’s several degrees of separation from my own demographic traits.

Reading widely can increase your ability to empathize, according to a study published in 2006 by University of Toronto professor Keith Oatley et al. In my opinion, writing further develops and fine tunes it; deliberately seeking ways to connect readers to new viewpoints deepens our experience of these viewpoints. We must immerse ourselves in them in order to share them.

Last year I visited author Karen Joy Fowler and she took me shopping. A clerk in what she’d told me was her favorite store was very, very attentive. As we were walking back to Karen’s house, I asked Karen if she’d ever had the feeling that this kind of helpfulness was also a way of keeping tabs on a possible thief. She hadn’t. But she showed me she understood what I was talking about even though it was outside of her experience. Nalo Hopkinson, Karen said, had once asked her how often she got strip searched when crossing the US/Canada border.

Not, you should note, whether Karen got strip searched. Nalo just assumed she did, because that was par for Nalo’s course. Her suspicious inquiry into the possibility of racial bias in their treatment (Karen is white and Nalo is Black) was, “How often?”

The store Karen and I were in at the same time was at the same location for each of us. The borders Nalo and Karen crossed were physically and geographically identical. Yet in both cases they were worlds apart. And Karen got that.

Of course she got it. Sarah Canary, her debut novel, published way, way back in 1991, shows us the mysterious, eponymous heroine from numerous characters’ perspectives. To Chin Ah Kin she’s ugly and obviously, therefore, a prostitute. To suffragist Adelaide Dixon she’s a heroic husband-killer. So on, so forth. Karen Joy Fowler knew what she was doing then, so long ago, and she still knows now.

Karen’s 70. I’m 65. At our ages we’ve witnessed the deaths of many worlds. My mother’s days and nights are gone. My mother’s dreams. Her friendships, those mutually built bowers of love and support and daring and rest are faded, melted, tumbled aside. Collapsed from without and within.

I hear that’s going to happen with me, too. Only before then I plan on making these models of my multitudinous mindscapes and getting you to come inside them. (You’re soaking in it.)

Twenty years ago, when I was applying for lots of grants, I wrote a Statement of Artistic Intent. That’s one text almost everyone asks for. My original SAI is lost to me in the mists of Wordperfect, but I can quote three relevant excerpts here:

“I want to make worlds out of words.”

“If I present my visions vividly enough, I can convince my readers that they’re wading through rivers of pearls, or flying through the air in a sentient dirigible.”

“The way into the worlds I make is easy and interesting. The adventures my readers have during their visits are the sort that stay with them when they have left. I write for the enlightened enjoyment of my audience, to draw them into a strange, familiar landscape, and show them secrets that no one has ever told them, yet which they know quite well are true.”

This is what I’ve been trying to do my whole life. Stories are worlds we leave behind us when we die.

I want you in my worlds. I want you in many others, too. The more you find, the more there are. Can you see them? Look through a thousand eyes. 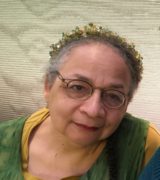 Nisi Shawl edited New Suns: Speculative Fiction by People of Color, winner of the World Fantasy Award, the FIYAH Magazine IGNYTE award, and others. Shawl wrote the 2016 Nebula finalist Everfair and the 2008 Tiptree/Otherwise winning collection Filter House. They are a co-founder of the inclusivity-in-SF nonprofit the Carl Brandon Society. In 2005 they co-wrote Writing the Other: A Practical Approach, a standard text on inclusivity. They live in Seattle, near a large lake full of dangerous currents.

One Response to “Through a Thousand Eyes”