All True, Especially the Lies—Or, How I Learned to Stop Worrying and Love Cardassia

I was a Babylon 5 fan. Absolutely, unconditionally, and no surrender. Nothing would induce me to watch Star Trek: Deep Space Nine (DS9). It was a rip–off. It was the same story, but not as good. It was a different story, so not as good. Worst of all it was… Well, it was Star Trek, and we all know what that means, don’t we?

These kinds of arguments burned brightly across the internet during the late–90s, remembered now only hazily, like the first Shadow War, and indeed they figured largely in discussion whenever my friend A. came round for tea. A. was very keen for me to watch DS9. I’m not sure why. Maybe he thought I’d like it. Anyway, very grudgingly, I eventually agreed to watch a few episodes. What harm could it possibly do? The next time he came round I could explain to him over our fish and chips how dreadful it all was.

A. is a clever man. He didn’t try to win me over with season 1 of DS9 (there’s much to admire in that season, but it’s not representative of where the show goes). No, A. wanted to win this argument, so, fittingly, he loaned me “The Way of the Warrior.” Klingons, I thought, with a deep sigh. How long have we been friends? Still, it was Worf, and the truth was that I had been something of a fan of The Next Generation (TNG) as a teenager, not that I would ever admit this to my cool new friends on the internet.

So I put the tape into the VCR (stop sniggering, younglings) and started watching.

You know, it wasn’t bad. It wasn’t bad at all. Quite exciting, once you’d got past the theme tune (still don’t like it, sorry). Also, there was this character having breakfast with Odo…

Hang on, who is this character having breakfast with Odo? He’s funny…

Oh dear, the Klingons have started punching him…

And he’s wisecracking back at them…

To say that little hearts were now appearing in my eyes would be something of an understatement. You need to imagine roughly a million hearts and about a thousand arrows fired by a whole company of Cupids. You have to imagine orchestral swell.

I’ll come back to Garak, in a minute. Garak is quite important to this story, although he’s not the only thing about DS9 that I love. Meanwhile, A. came for tea again. I returned the videos. He’d brought more, “Just in case.”

I ordered him to bring more, immediately.

I watched “Home Front” and “Paradise Lost,” a two–parter, pre–dating 9/11, which examines what happens when we trade liberty for security. I had no idea Star Trek could do stories like this, or would even consider doing stories like this. TNG had always been upright and careful; DS9 was as baffled about the world as I was, trying to make sense of it all, trying to do its best with imperfection. Season 4 wore on and, by the time the Dominion War broke out, I was utterly absorbed in the lives of these characters: lovelorn, exiled Odo; bright and brilliant Jadzia; fearless, truthful Kira. Jake, trying to live his own life while struggling with the expectations of those around him. Nog, the same, in reverse.

And most of all Garak: enigmatic, witty, deeply troubled, and, like a Greek chorus, providing jaded commentary on everything happening around him. I was hooked by the time season 6 started, of course, and then I put on “In the Pale Moonlight,” in which Garak gently but relentlessly corrupts Sisko and turns the whole of Star Trek upside down. This show wasn’t feel–good. This show, while certain about its storytelling, wasn’t certain about Federation imperialism. This show was afraid of what power could do. I was utterly bewitched by the whole thing.

As I recall, by the time season seven started, I was the one buying the video tapes and lending them to A. That was how far I’d come. And by now I had defined my chief interest in the show: Cardassia, in all its gloomy glory: a civilisation of great cultural sophistication and vast ethical failure. We are explicitly asked, I think, to read the history of the Second World War onto the Dominion War (no doubt as the writers of the show considered the experiences of their grandparents), and with the Cardassians we are, I think, asked to reflect upon the tragedy of twentieth–century Germany: how did such a cultured nation fall into the hands of barbarians? Any intelligent European must reflect upon the war–torn centuries of their continent, the last century the worst of all. When I watched Dukat’s rise to power, when I saw Garak forever put aside the better angels of his nature in the name of patriotism, when I saw Damar’s struggle from swaggering bully to man of conscience, I was being asked to consider the blood–stained history of my continent: how this had happened, what could be done to stop it ever happening again. Watching Garak stand in the rubble of his burning civilisation, lamenting his and their crimes, moved me tremendously. Something in this story spoke deeply to me.

I am a fanfiction writer by history and inclination, by which I mean my instinctive response to a text which affects me in some way is to move into the space of that text, inhabit it as entirely as possible, and start writing from within it. I had barely finished watching “What You Leave Behind” before hitting the keyboard. I had to write about this: about Garak’s remorse, Ziyal’s murder, Damar’s sacrifice. I found—thank my lucky stars—a beta reader of great skill (a professor of English literature, no less), who coaxed from me my first novel–length piece of writing, an alternate universe story in which Enabran Tain successfully destroys the Founders and Garak returns triumphantly to Cardassia… for a while. I read deeply into the history of the rise of Nazism, particularly Gitta Sereny’s outstanding biography of Albert Speer, and some of what I learnt fed into my stories of Cardassia, and the architects of her ruin.

And then, I had a massive stroke of luck. My stories were getting some nice attention—complimentary reviews and some fan awards. It was all lovely and I couldn’t believe people were enjoying them so much—they were pretty bleak! Then, out of the blue, came an email from the editor of the Star Trek books range at Pocket. My writing had been recommended to him. The tenth anniversary of DS9 was coming up. Would I like to pitch a story?

We’ll skip my undignified squeals and cut straight to my polite, “Yes, please, that would be great!” I came up with some ideas and pitched them, and these, eventually, became my first novel, Hollow Men, a follow–up to that episode which had blown me away so much, “In the Pale Moonlight.” In this novel, Sisko and Garak go to Earth together, and there is much merry hell. I wrote other stories too, one set in post–war Cardassia involving Garak and Miles O’Brien and much merry hell. And a short story about Kira, Damar, and Garak, fighting the Dominion on Cardassia Prime. There’s less merriment in that one.

I’ve kept writing for the Star Trek books range since then. My two favourites of my own books are The Never Ending Sacrifice, which tells the story of the Dominion War and afterwards from the perspective of an unusual young Cardassian living unwillingly on Cardassia Prime. And there is The Crimson Shadow, in which Picard and the Enterprise visit post–war Cardassia Prime, where Garak is fighting the good fight against the rise of nationalism and an unpleasant demagogue. Stories like these are always sadly timely.

It’s nearly fifteen years since I started watching DS9, and I can’t believe my luck that this show came to me at exactly the right moment, when I was ready for it, and ready to shift my writing from hobby to profession. I’ve been able to take characters and settings I adore and shape their future histories. My books have been best–sellers and my publications got me a much–wanted job teaching creative writing at university. And I still don’t feel these stories are done. Every so often, I hear a polite clearing of the throat behind me, a gentle tap on my shoulder, and I hear Garak murmur “Now, my dear, where did we leave matters…?”

And round we go again, for Cardassia.

In the end, then, I have to be grateful to my friend A. for pressing those tapes onto me. Certainly he won the argument hands–down—although, now I come to think about it, I’m not sure he’s ever watched Babylon 5…

(Editors’ Note: Una McCormack is interviewed by Deborah Stanish in the Uncanny Magazine Podcast Episode 12A.) 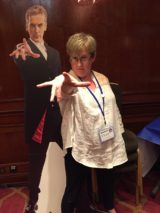 Una McCormack is a The New York Times best–selling author specialising in TV tie–in fiction, particularly Star Trek and Doctor Who. She holds a doctorate in sociology, and is lecturer in creative writing at Anglia Ruskin University, Cambridge.

One Response to “All True, Especially the Lies—Or, How I Learned to Stop Worrying and Love Cardassia”