Writing With My Keys Between My Fingers

Like you, like almost all writers, I live on the internet. I work there, too. My Twitter DMs have gotten me gigs and solicitation for anthologies and hot tips and networking. They’ve also brought me suggestions that I should kill myself because of my opinion of Tom Clancy.

The internet is a safer place for some people than it is for others. It’s just like the real world, because it is the real world.

There is a famous classroom exercise where men are asked: what steps did you take today to avoid being sexually assaulted? Typically there is no response given, because this is not a thing that most men routinely consider. When the question is put to the women in the room, the response is detailed and practical: we travel in groups, we stay aware of our surroundings, and we flat-out avoid the places and situations where we know we will be too vulnerable to enjoy whatever it was we set out to do. We do what we want, but we carry our keys poked out between our fingers, like claws.

There is a parallel conversation that women writers have with one another. Before a story or a book—but particularly before non-fiction like cultural criticism, memoir, essay, or review is published—we ask one another: what steps have you taken to anticipate the harassment that is almost sure to follow? Every time I have had this conversation, the protective measures described remind me of those keys threaded through our fingers and those streets we will not walk at night. Every woman I know battens down her proverbial hatches on the eve of publication.

The steps taken follow the pattern of questions one gets after one has been victimized. Well, did you protect yourself? Did you make yourself an easy target? We do everything right.

It does not matter. If the mob wants you bad enough, the mob will reach you. Carrying your keys in your fist is not enough.

There is a conversation I wish men had among themselves about how they respond to women who write online. They could share their strategies to avoid sending cruel and hateful messages:

But I don’t think they share those thoughts with one another, because this isn’t getting any easier. Rape culture is running the world1, and the internet persists as our dark mirror. Reporting assault or attempted assault in the real world brings no result at all most of the time, only suggestions that you take better precautions. Two years ago, a stranger on a train put his penis in my bare hand. The cops told me (I am not kidding) to stop wearing skirts. This year, I reported a Twitter account that said he would rape me, if I wasn’t too fat to prevent it. Twitter assured me this did not violate their codes of conduct.

Online injustice erodes our access to public space the same way fear of assault keeps us from walking alone at night. I am beginning to hear more and more of us admit that it just isn’t worth it anymore. I am fortunate enough to know editors to whom I can pitch essays on any topic I desire, and in most cases I get a chance to publish. I am a prolific essayist, and I publish often.

However, there are subjects I think twice about engaging. Even with good professional rates, a lot of exposure, and a proven link to people buying my books, there are some subjects that just aren’t worth it. I’ve written about the Marvel Cinematic Universe, Star Wars2, Rick and Morty3, DC Comics, and Harry Potter4 in the last few years. The response to my work is varied: some praise, some criticism. I don’t mind that. Nobody makes a detailed plan to save themselves from the trauma of simple disagreement. What I do mind is that the aftermath of each of these things has included slurs, threats, and targeted harassment.

I never publish the threats made against me, because they don’t deserve notoriety or notice. At my editor’s prompting, I will give you some examples so that you understand.

Writing about Marvel earned me a long, detailed, violent rape fantasy that took place on my daily public transit commute written out in all caps and sent to me through my website.

Writing about Star Wars got a guy on Twitter to describe the sound and smell of fat rendering off my body as I burned alive.

Writing about Rick and Morty got me called every possible variation of “stupid fat ugly cunt” possible in English, through multiple points of contact.

Writing about DC Comics brought me a delightful barrage of absolutely rote fake geek girl5 accusations so boring and predictable I could cry.

Writing about Harry Potter has, over the years, netted me some invasive speculations about my sexuality and couple of  dick pics; truly the full gamut of human experience.

This is not even to mention the responses I’ve gotten when I’ve written about sex, feminism6, being queer7, or being fat8. Those responses are unspeakable, even here.

These are real-world threats that I have to deal with in real life. They affect my future and my sense of safety. Most of all, they affect my decision-making. I have serious misgivings about writing on any of those subjects again.

I’m not alone in this. I’ve had private conversations with close friends and professional colleagues who have varying levels of PTSD after having published work on vaccination9, disability, geek culture, toxic masculinity, and even seemingly inoffensive subjects like fountain pens. Every woman writer I know has had to weed an inbox full of dick pics, requests for feet pics, or creepy pictures taken of her when she wasn’t looking. Every woman writer I know has gotten at least one death threat or rape threat for writing about something as harmless as Game of Thrones. I’ve had conversations with women who work with major games-focused publications who have had to forward some of their emails to the FBI because of the level of specific violence threatened in them.

These are not things that we can ignore. We grow accustomed to this level of vitriol and vulnerability. We laugh about it in private (“Add it to the rape threat pile! Dick pics are in the lead today! Get it together, Team Death!”) but most of us don’t air it in public because we’d like people to focus on our work, not our weariness. We can’t simply dump our emails and ignore our inboxes; this is where we get work.

This is exhausting. This is the point at which I start to make decisions about what’s worth it and when it might be better to refrain. This is as sharp as a ring of keys between my fingers; I want to protect myself, but not to cave to the pressure intended to drive me toward shutting up and retiring from public life. Every woman I know is doing the same impossible word problem: how many times can I have this fight before it sucks all the joy out of this thing that I love?

How many times am I going to turn down an opportunity before editors stop asking?

If I keep quiet, do the people trying to silence me win?

If I don’t write this this, who will?

If a man writes it and smugly enjoys the ensuing silence and praise, did I lose?

How much have I given up?

How much is too much?

Is there anywhere in the world where I can walk alone at night, freely talking about how much I love Kirby or Tolkien or Portal or being alive?

Good advice abounds for how to handle this kind of hostile work environment, much of it phrased expertly by Zoe Quinn, the unburnt witch herself10. What’s missing from the ongoing conversation is the kind of instruction that focuses on the aggressors in this situation. I see precious few people teaching empathy for online behavior. Most platforms invest themselves in engagement, but don’t care at all what form it takes.

Twitter sweet-talks the victimized11 into returning to the platform after they’ve been forced to quit, but it hardly ever bans the Nazis or the rape-and-death-threat enthusiasts. Verticals that I’ve written for will delete comments, but not ban users. “Ethics in game journalism” has become a grim-grinning watchword for the ostensibly moral fixations of an amoral brigade of brigands. We don’t teach men not to harass people online any more than we teach them not to rape. In both cases, we treat the transgression as natural and inevitable, and we sell rape whistles and block buttons to the victims. If we defend ourselves or fight back, harassers assume the posture of victimhood and use their power to get us censured, banned, or fired. If we don’t defend ourselves, we passively take damage. If we quit, our attackers win by default.

There is nothing so exhausting as a no-win situation.

Exhausted or not, women are always sharing this advice with each other; passing tips, recommending strategies, speaking from our own experience. The last time I was in a group of people (writers, artists, streamers, game journalists) sharing this information, I realized with an eerie feeling that I had been here before. The survivors share their story. The planners talk strategy. The people who could actually change Twitter and Reddit and Facebook and almost every online platform so that the outcome of this fight is to silence harassers and not creators assure us that they’re looking hard at this problem, and they’ll have a solution soon. Then they do nothing.

The result is that these things don’t change. They haven’t changed in the decade that I’ve spent publishing my work online. The women I know still write with their keys threaded between their fingers. Every woman who works online has been rendered sharp and brittle by this process, and every one of us has survived an onslaught of terror and abuse. This is doubly true for queer women, trans women, women of color, and non-binary people who write. I’ve focused here on myself and the women writers I know, not to be binarist or reductive, but to represent the experience I know best.

Here’s what else I know best: I’m done.

I am done turning down opportunities. I am done keeping quiet. I have written with my keys in my hand for the absolute last time.  If there is no way to win this fight, if I must endure the conditions of threats and harassment for the act of being a woman writing online, then I might as well write exactly what I want and get paid for enduring what follows.

I wonder what the world would look like if every other woman decided to do the same.

I wonder what it would look like if we didn’t have to.

[7] “How I Learned the Craft of Going on Dates with Girls”. Catapult. November 15, 2018. https://catapult.co/stories/how-i-learned-the-craft-of-going-on-dates-with-girls-meg-elison

[8] “My Friends Would Rather Have Their Guts Cut Open Than Be Like Me”. The Establishment. April 15, 2018. https://theestablishment.co/my-friends-would-rather-have-their-guts-cut-open-than-be-like-me/index.html

[9] “Rubella gave me a disability. This is my message to anti-vaxxers”. CNN. February 19, 2019. https://www.cnn.com/2019/02/19/opinions/measles-outbreak-anti-vaccine-movement-disability-sjunneson-henry/index.html

[10] “Crash Override: How Gamergate (Nearly) Destroyed My Life, and How We Can Win the Fight Against Online Hate”.  Public Affairs. September 5, 2017. https://www.amazon.com/Crash-Override-Gamergate-Destroyed-Against/dp/1610398084 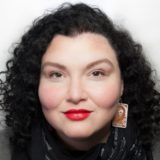 Meg Elison is a science fiction author and feminist essayist. Her series, The Road to Nowhere, won the 2014 Philip K. Dick award. She was a James A. Tiptree Award Honoree in 2018. In 2020, she is publishing her first collection, called Big Girl with PM Press and her first young adult novel, Find Layla with Skyscape. Meg has been published in McSweeney’s, Fantasy & Science Fiction, Fangoria, Uncanny, Lightspeed, Nightmare, and many other places. Elison is a high school dropout and a graduate of UC Berkeley. Find her online, where she writes like she’s running out of time.