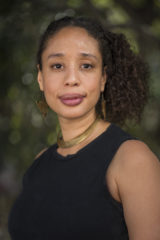 Alaya Dawn Johnson is a Nebula award-winning short story writer and author of seven novels for adults and young adults. Her most recent novel for adults, Trouble the Saints, was released in July 2020 from Tor books. A short story collection, Reconstruction, was released in January 2021 from Small Beer Press. Her young adult novel The Summer Prince was longlisted for the National Book Award for Young People’s Literature, while her novel Love Is the Drug won the Andre Norton/Nebula Award for Middle Grade/Young Adult fiction. Her short stories have appeared in many magazines and anthologies, including Best American Science Fiction and Fantasy 2015, A Phoenix First Must Burn, Feral Youth, and Zombies vs. Unicorns. She lives in Mexico where she received a master’s degree with honors in Mesoamerican Studies at the Universidad Nacional Autónoma de México, for her thesis on pre-Columbian fermented food and its role in the religious-agricultural calendar.