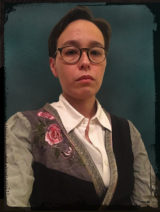 Aliette de Bodard lives and works in Paris. She has won three Nebula Awards, a Locus Award, a British Fantasy Award and four British Science Fiction Association Awards, and was a double Hugo finalist for 2019 (Best Series and Best Novella).

Her most recent book is Fireheart Tiger (Tor.com), a sapphic romantic fantasy inspired by pre colonial Vietnam, where a diplomat princess must decide the fate of her country, and her own. She also wrote Seven of Infinities (Subterranean Press), a space opera where a sentient spaceship and an upright scholar join forces to investigate a murder, and find themselves falling for each other. Other books include Of Dragons, Feasts and Murders, (JABberwocky Literary Agency, Inc.), a fantasy of manners and murders set in an alternate 19th Century Vietnamese court. She lives in Paris.