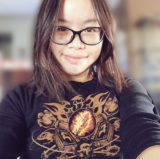 Anya was born in Singapore and has Hainanese, Peranakan, and Hakka ancestry. She moved to Melbourne to practice law for a few years. Anya now works in an ad agency as a designer and as the chief briber of studio dogs. Her first novel, The Firebird’s Tale, was published in 2016. Anya’s short stories have appeared in venues such as Strange Horizons, Daily SF, and Aurealis. She can be found on Twitter @anyasy.