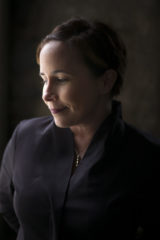 Fran Wilde’s novels and short stories have been finalists for three Nebula awards, two Hugo Awards, and a World Fantasy Award. They include her Andre Norton- and Compton Crook-winning debut novel, Updraft (Tor, 2015); its sequels, Cloudbound and Horizon; the middle-grade novel Riverland (forthcoming from Abrams in April 2019); and the novelette “The Jewel and Her Lapidary.” Her short stories appear in Asimov’s, Tor.com, Beneath Ceaseless Skies, Shimmer, Nature, and the 2017 Year’s Best Dark Fantasy and Horror. “Clearly Lettered in a Mostly Steady Hand,” which appeared in Uncanny, was a finalist for the Nebula, Hugo, and World Fantasy Award, and won the 2018 Eugie Foster Memorial Award. You can find her on Twitter, Facebook, and at franwilde.net.