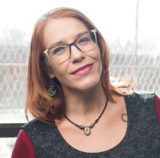 Kelly Robson is a Canadian short fiction writer. Her novelette “A Human Stain” won the 2018 Nebula Award, and she has won both the 2019 and 2016 Aurora Awards for best Short Story. She has also been a finalist for the Hugo, Nebula, World Fantasy, Theodore Sturgeon, Locus, Astounding, Aurora, and Sunburst Awards. Kelly consults as a creative futurist for organizations such as UNICEF and the Suncor Energy Foundation. After twenty-two years in Vancouver, she and her wife, writer A. M. Dellamonica, now live in downtown Toronto.