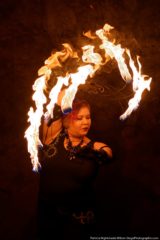 Michi Trota is a five-time Hugo Award winner, British Fantasy Award winner, and the first Filipina to win a Hugo Award. Michi is Editor-in-Chief of Science Fiction & Fantasy Writers of America (SFWA) and Senior Editor of Prism. She is also co-editor of the WisCon Chronicles Vol. 12 with Isabel Schechter (Aqueduct Press), has written for Chicago Magazine, and was the exhibit text writer for Worlds Beyond Here: Expanding the Universe of APA Science Fiction at the Wing Luke Museum in Seattle, WA. She’s been featured in publications like the 2016 Chicago Reader People Issue, Chicago Tribune, and The Guardian, and has spoken at the Adler Planetarium, the Chicago Humanities Festival, and on NPR about topics spanning feminism, media representation, and pop culture. Michi is a firespinner with the Raks Geek Fire+Bellydance troupe, past president of the Chicago Nerd Social Club Board of Organizers, and lives with her spouse and their two cats in Chicago.