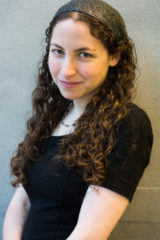 Navah Wolfe is an editor at Saga Press, Simon & Schuster’s science fiction and fantasy imprint, where she has edited critically–acclaimed novels such as Borderline by Mishell Baker, Persona by Genevieve Valentine, The Mountain of Kept Memory by Rachel Neumeier, and A Green and Ancient Light by Frederic S. Durbin. She is also the co–editor, along with Dominik Parisien, of The Starlit Wood, an anthology of cross–genre fairy tale retellings, released in October 2016 from Saga Press. She was previously an editor at Simon & Schuster Books for Young Readers, where she worked on many bestselling books, including some that have won awards such as the Printz Honor, the Pura Belpré Award, the Pen/Faulkner Award, the Stonewall Award, the Lambda Literary Award, and the Schneider Family Award. She has previously worked as a bookseller, a rock climbing wall manager, and a veterinary intern at a zoo. She lives in Connecticut with her husband, two tiny humans, and one editorial cat. She can be found online at sagapress.com and on Twitter as @navahw.