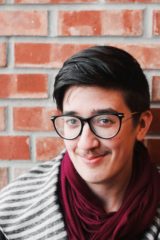 Nino Cipri is a queer and trans/nonbinary writer, editor, and educator. A graduate of the Clarion Writers’ Workshop, and the University of Kansas’s MFA, Nino’s fiction has been nominated for the Shirley Jackson, World Fantasy, Lambda, Nebula, and Hugo Awards. A multidisciplinary artist, Nino has also written plays, screenplays, and radio features; performed as a dancer, actor, and puppeteer; and worked as a stagehand, bookseller, bike mechanic, and labor organizer.

One time, an angry person on the internet called Nino a verbal terrorist, which was pretty funny.

Nino’s 2019 story collection Homesick won the Dzanc Short Fiction Collection Prize and was chosen as one of the top ten books on the ALA’s Over the Rainbow Reading List. Their novella Finna — about queer heartbreak, working retail, and wormholes — was published by Tor.com in 2020, and its sequel Defekt came out in April 2021. Nino’s YA horror debut, Burned and Buried, will be published by Holt Young Readers in 2022. They also write a sporadic newsletter, COOL STORY, BRO, about narrative storytelling and how cool it is.