Mallory Yu is a producer, editor, and director for NPR’s All Things Considered. In addition to working on daily news stories, she’s doing her best to bring her love of nerdy pop culture and science fiction/fantasy to the show, through creator interviews on the show or her own reporting. As a queer Chinese-American, she’s especially interested in exploring the intersection of identity, race, and pop culture and can often be found ranting about the lack of nuanced representation of POC in all forms of media. In her spare time, she’s reading comics, working on her next cosplay, and dreaming about upcoming travels. Her Twitter handle is @mallory_yu. 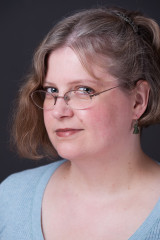 Stephanie Zvan is a Minneapolis–based writer and activist. She is part of a mysterious feminist cabal that openly tells anyone who listens that they’re here to make their communities more open and welcoming to everyone who’s willing to share. She’s been published from CarnalNation to the Ada Initiative’s blog to Nature Futures. When she’s at home, you can find her at Almost Diamonds on The Orbit.